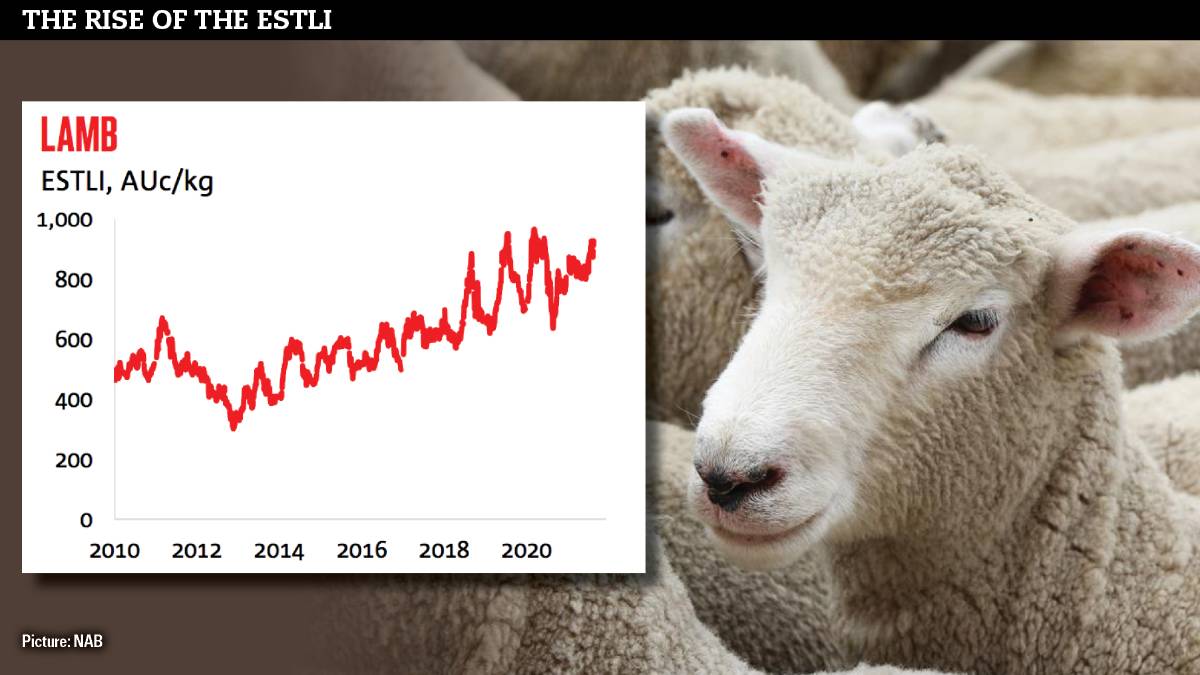 Over the last decade the Eastern States Trade Lamb Indicator has experienced a steady increase. Recently it broke the 950c/kg barrier.

Whether the sheepmeat sector is in the grips of a supercycle or simply reflecting some key demand fundamentals is probably not weighing too heavily on the minds of producers.

They're too busy trying to capitalise on the big money on offer.

Across the board for both lamb and mutton prices remain strong, driven by restocking, as well as domestic and export meat demand.

The desire of farmers to restock and increase flock sizes after the drawn-out drought has been well documented.

Now analysts are predicting as more producers start to realise the increasing value of sheep, their intentions are to not only rebuild their flocks, but to expand them.

According to the latest Meat and Livestock Australia (MLA) sheepmeat survey results, 92 per cent of producers nationally intend to either increase or maintain their flocks over the next 12 months.

And this, analysts predict, is what will keep lamb and mutton prices high.

So as many of the prices of commodities across agriculture are rising on the back of supercharged pandemic-driven demand and reduced production, sheepmeat is well in the the mix of the so called 'supercycle'.

Thomas Elder Markets analyst Matt Dalgleish said the growth that the sheepmeat industry has seen in pricing over the last two decades undoubtedly has elements of a supercycle to it.

"The growth of population and wealth in developing economies has created supercycle-like price movements for sheepmeat because sheepmeat is a global niche product with only two main suppliers - Australia and New Zealand," Mr Dalgleish said.

"But is it a supercycle or is it supply and demand fundamentals that are in favour of sheep?

"Whatever it is, we have seen growth in export markets at a time when global supply in terms of exporting nations that can supply sheepmeat has been going down.

"That is what is driving these really good prices."

To date this year, the price of lamb has continued its rise as global demand for meat ramps up through the back half of the winter season with all lamb indicators performing well above last year's levels.

According to Nutrien Ag selling agent Peter Cabot thousands of heavy lambs have recently sold to $345 a head, equating to about $9/kg, and yarding numbers are as seasonal highs.

"Normally in the winter months we don't see these sort of numbers, it is reasonably quiet," Mr Cabot said.

"But we have had larger yardings in comparison to this time of the year in the past few years and this is mainly driven by producers cashing in on the current good prices.

"In the past six weeks, prices have been very strong, probably the strongest we have ever seen them."

In the past six weeks, prices have been very strong, probably the strongest we have ever seen them - Peter Cabot, Nutrien Ag Solutions

ANZ head of agribusiness insights Michael Whitehead said looking ahead, assuming that typical market trends play out, lamb prices could come off current highs over the next two months as the usual spring flush of lambs come through.

But he said one factor which may slow this trend down this year could be that desire for producers to hold onto more of their lambs than usual, and not just to continue restocking their properties,

"In Victoria's Wimmera Mallee region, tighter feed conditions earlier in the year saw a reasonable sell-off of ewes and lambs, which is likely to see a noticeably reduced volume of spring flush lambs.

"In these areas, some producers are likely to seek advantage of current high mutton prices, by selling cull ewes, or weaning early to sell older ewes."

As with long-term lamb forecasts, the signs for mutton continue also to be strong.

Export demand remains high, largely from China, and a softening in the Australian dollar has only further increased the attractiveness of mutton exports.

As a result, mutton export volumes are up around 30pc on the same time last year.

At the same time, mutton prices continue their steady growth, up around 26pc from the price last September.

A sign of the confidence in the mutton market has been that recent larger yardings, particularly in NSW and Victoria, which have had no downward impact on mutton prices.

Mr Whitehead said the prospects for sheep producers are excellent.

"If we accept that we have close to a steady amount of land, that farmers are balancing between sheep, cropping and cattle, while there is an incentive to increase sheep numbers, if producers at the same time are doing well out their cattle and their grain, but they are used to the volatility in sheep, there could be an incentive there not to lift the flock at a drastic rate."

Mr Dalgleish agreed the future for sheep producers undeniably looks positive for the next decade or more.

"Irrespective of your view on the likelihood of a supercycle for sheepmeat, the underlying long-term fundamentals are favourable for the sheep producer," he said