Josh and Denae Phelps, a Tambo couple who are well-known buyers in the saleyards at Blackall, have taken out the inaugural Barcoo Beef Challenge feedlot competition.

Josh and Denae Phelps, a Tambo couple who are well-known buyers in the saleyards at Blackall, have taken out the inaugural Barcoo Beef Challenge feedlot competition.

Designed to give primary producers a chance to showcase their livestock and gain valuable insight into their breed capabilities, Mr Phelps, who operates a predominantly trading operation at Tambo with wife Denae, said he would have to eat his words.

"I never gave the trade people a chance in this competition," he said. "The producers know their bull, they know where their calf is from - we must have done something right."

The awards were presented at a dinner in Tambo on Saturday evening, attended by 110 and MCed by radio host Ben Dobbin. 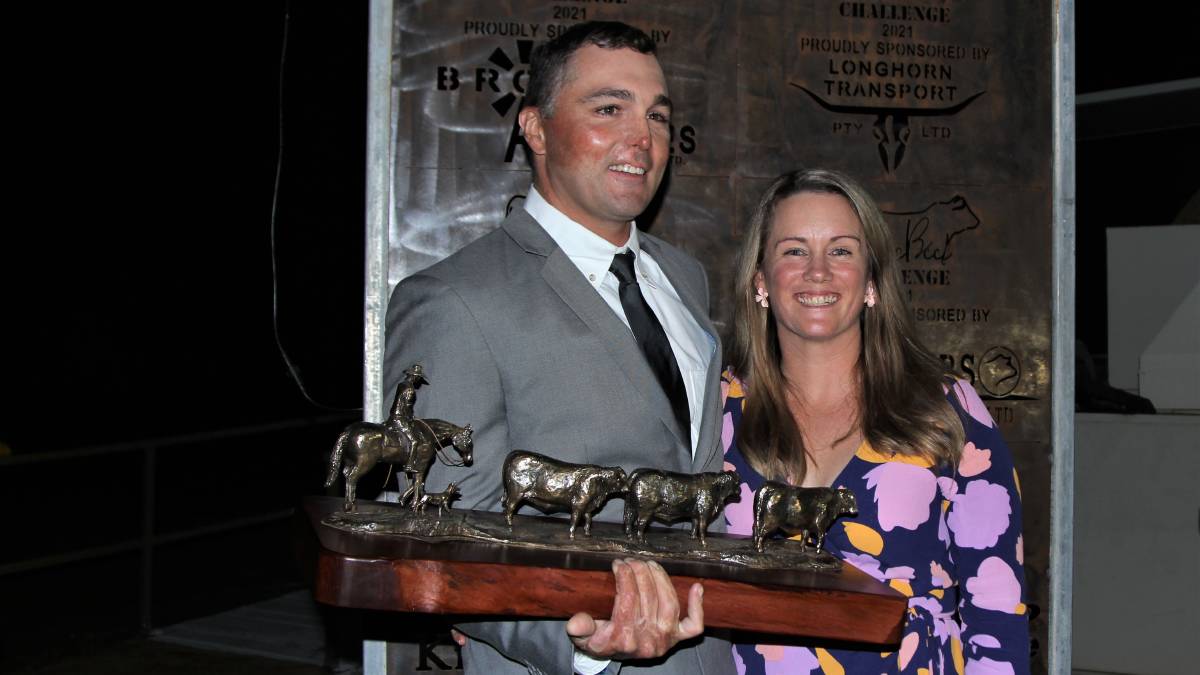 As well as being a shock, Mr Phelps said the win was a real honour.

He spent five years working with Tom Brodie at Brodie Agencies in Winton and said there had been a lot of people in the competition that he considered leaders in the industry, that he looked up to.

The Phelps, who are based at Jynoomah, south of Tambo, won with Charbray cattle sourced both from the Blackall and Barcaldine areas, and from a southern Queensland breeder.

"It's the F1 hybrid vigour we go for - the Charbrays are renowned to make big bullocks aren't they," Mr Phelps said.

It's brands and past history that he looks for at sales.

"That's what we've got to go off - that and constitution and temperament," he said.

The 396 cattle in the competition were fed at B Feeders at Rodger's Creek near Warwick, where a field day for competitors was held at day 84 on feed, with cattle entering the feedlot at an average weight of 406 kilograms in late November.

Mr Phelps, who was on the organising committee and who predominantly trades steers into the 100-day feeder market, along with filling a fortnightly Woolworths contract, said he thought the competition had been especially valuable for those who hadn't experienced feeding cattle before.

"They put a lot into buying their bulls, but this way they see the chain of how it all works, and where the progeny goes," he said.

"We've had so many phone calls, even before last night's results were announced, asking when we're going again.

"When we started, it was pretty adverse conditions late in the year when people's heavy cattle were gone, but now the job's flying, people are in the prime of cattle breeding - I think this will grow, for sure."

Their aggregate average daily weight gain was 2.92kg while the single beast ADG was 3.96kg.

The vendor-bred carcase competition was won by Simon and Mym Daley, of Blackall and Injune, while the Brown family of Jabinda, Tambo had the best local highest weight gain entry.

In the section for highest grossing animal, Andrew and Anna Nugent's AMP Cattle Co tied for first with Lee Curtis from Stanhope Cattle Co, with animals valued at $2954.60.

The single animal carcase weight gain award was a tie for first between GR and HR Dales and Stanhope.

In excess of $40,000 in prizemoney was given out on an evening where guest speaker Shane Webke paid tribute to the hard work of those attending by saying they knew the truth of his speech, that rewards come from hard work.

The ex-Brisbane Broncos star forward now Channel 7 sports reporter said his father had taught him to knuckle down and do the jobs that had to be done.

As the audience hoped, he gave his thoughts on the Broncos' 2020 wooden spoon, saying that the ethic of turning up and getting the job done had been bred into himself, like most bush people, without expecting to feel good every day.

"It's not about talent, it's about knowing how to deal with what goes wrong," he said. "A culture is about rules, and we have a club that's forgotten that."

He confessed to a beef breeding audience that his passion was for Merino sheep, and said much of the misunderstanding of the bush lay at the feet of urban teachers who saw the hardship of ongoing drought and urged people to pursue a profession other than working on the land.

A new competition is planned for 2022, with cattle to enter the feedlot in mid-March next year.