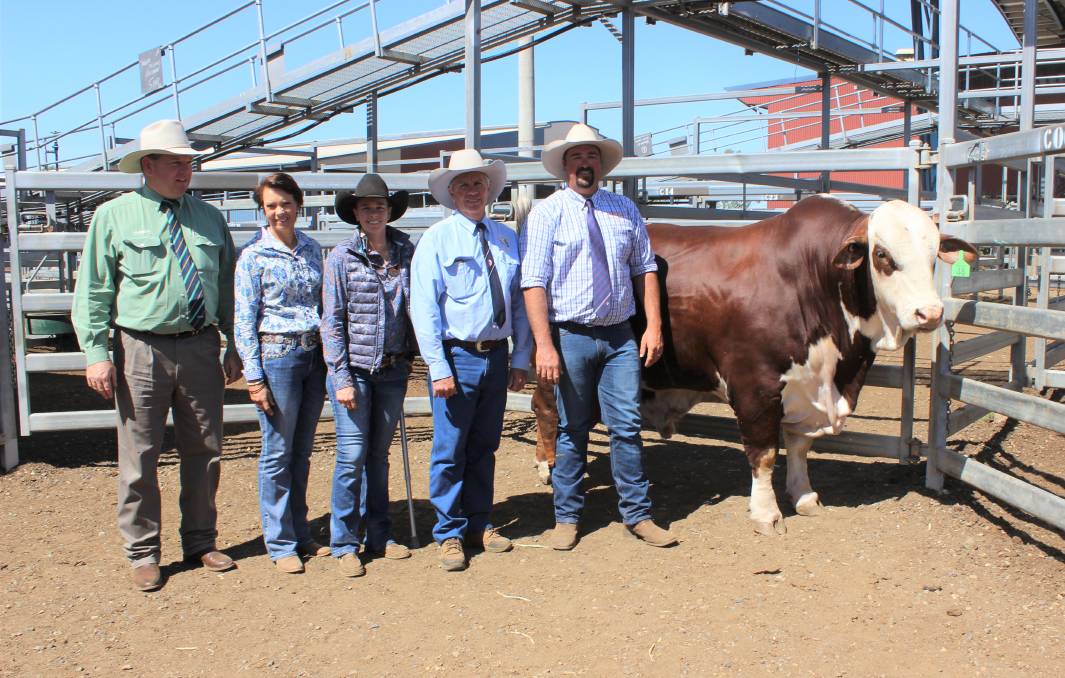 A 38-MONTH-OLD bull, reared on the tablelands of the Northern Rivers in NSW, was the standout sire at the Riverina Stockfeeds National Braford Sale at Gracemere on September 9.

Presented by Doug Bennett, Little Valley Grazing Company, Stratheden, Casino, the young bull snatched the auction limelight at the Central Queensland Livestock Exchange when he sparked a spirited bidding duel before selling for $40,000.

One of 105 bulls selling under the hammer, he was bought by Russell and Donna Kenny, Harriett Valley, Gayndah, and helped push the aggregate to $830,750, which delivered a "very healthy" average of $7912, according to selling agent Mark Scholes.

Mr Bennett, whose operation is celebrating its golden anniversary, had an obvious liking for Little Valley Richard 2976 (036) (P11677 B) (P).

"The bull has good depth, good character and he will mix well with my cows," Mr Kenny said.

Mr Kenny thought the opportunity to acquire the bull was too good to overlook.

"It's not every day you see a bull like him come up for sale," he said. "Like I say, they had nearly two full brothers and they've retained one and that's the only reason I'd say they put this one up for sale.

"I did not expect to go quite as high as I did but when the bids did come in I was not surprised. I was always going to try and get him.

"It's not too often in the family that we all agree on one bull but this time we did and so here we are."

The next highest price paid on the day belonged to Larry Acton, Riverton, Gogango, who stopped the auctioneer at $31,000.

"This fellow has an awful lot of what I am looking for. He has scale, length, muscling, beautiful polled head and good walking gear. Essentially he ticked every box for me," Mr Acton said.

The Australian Braford Society was the host of the sale but also the benefactor of a charity sale of a Little Valley Grazing Company heifer, which sold for $4000.

"The donation was very welcome. It is always a struggle for a breed society to find funds and to build a budget and then live within that budget and any donation is really appreciated," Braford Society president Dan Galloway said.

"It was an excellent sale with good results all round. It sort of surprised a lot of us.

"The clearance was really good and the average was really good considering the conditions. With such strong results I think it shows how well the Brafords are doing out there in the market and where we're going as a breed."