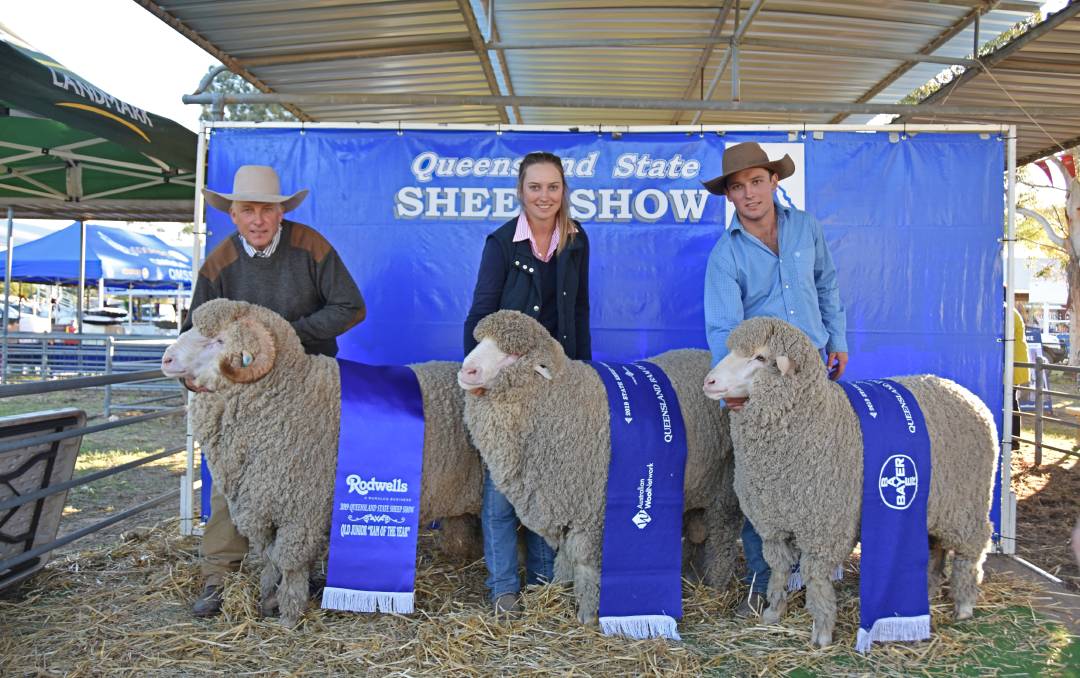 Nigel Brumpton said they were overwhelmed by their success at this year's State Sheep Show.

The Brumpton family of Mt Ascot Merino Stud and Jolly Jumbuck Poll Merino Stud, Mitchell, made a clean sweep of the Queensland awards at the State Sheep Show held in conjunction with the Roma Show.

Nigel and Rosemary Brumpton and family exhibited Mt Ascot Matt, who accumulated many awards throughout the judging including Queensland junior champion ram, champion medium wool ram and grand champion ram of the show. He weighed in at 130kg, muscle depth 41mm and muscle width 87mm at 20 micron.

Mt Ascot Heather, who has been artificially mated in-lamb had earlier been awarded the dual purpose ewe of the show, junior champion ewe of the show and champion strong wool ewe. She weighed in at 90.5kg as a two tooth ewe with muscle depth 42mm and muscle width of 85mm at 19.1 micron.

Excitement continued for Felicity, Charlie and Lachie Brumpton of Jolly Jumbuck Poll Merinos when Jolly Jumbuck Harry was again judged Queensland Ram of the Year. Harry weighed in at 127kg with a 19.7 micron, 2.7 SD, 13.7 CV, 99.8 CF.

Named after Prince Harry, it is back to back wins for Jolly Jumbuck Harry, who claimed the same title at Blackall show last year.

Jolly Jumbuck Harry and Mt Ascot Heather have earned the right to proudly fly the Queensland flag at the Australia Sheep and Wool Show in Bendigo, Victoria, in July.

They will also head to the National Merino Sheep Show in Dubbo, NSW in August.

Family spokesperson Nigel Brumpton said they were overwhelmed by their success at this year's State Sheep Show competing against the quality of the interstate and Queensland studs.

"We exhibit our sheep in shows as we believe it is very important and one of the best ways to benchmark what we are breeding at both a state and interstate level," Mr Brumpton said.

He said they were pleased that Jolly Jumbuck Harry went back-to-back wins for the second year as the Queensland Ram of the Year.