The Dawsonvale team take a break from mustering and loading the mob - managers Peter and Jackie Hill, James and Sarah Pearson, and Toby Kehl, Taroom.

Together with their managers Peter and Jackie Hill, James and Sarah Pearson loaded 292 No. 8 steers onto five B-double road trains at Dawsonvale, east of Taroom last week, bound for Cannon Hill.

At the end of the day they averaged 372kg with only one grading penalty for meat colour, which Arcadian Organic livestock manager Peter Gall said made them the best-performing cattle they'd killed this year.

"The Pearsons are in the top 10 per cent of our suppliers generally for matching specs," he said. "The closer cattle are to our specs, the better it helps us match the markets - it means a lot to us and our customers." 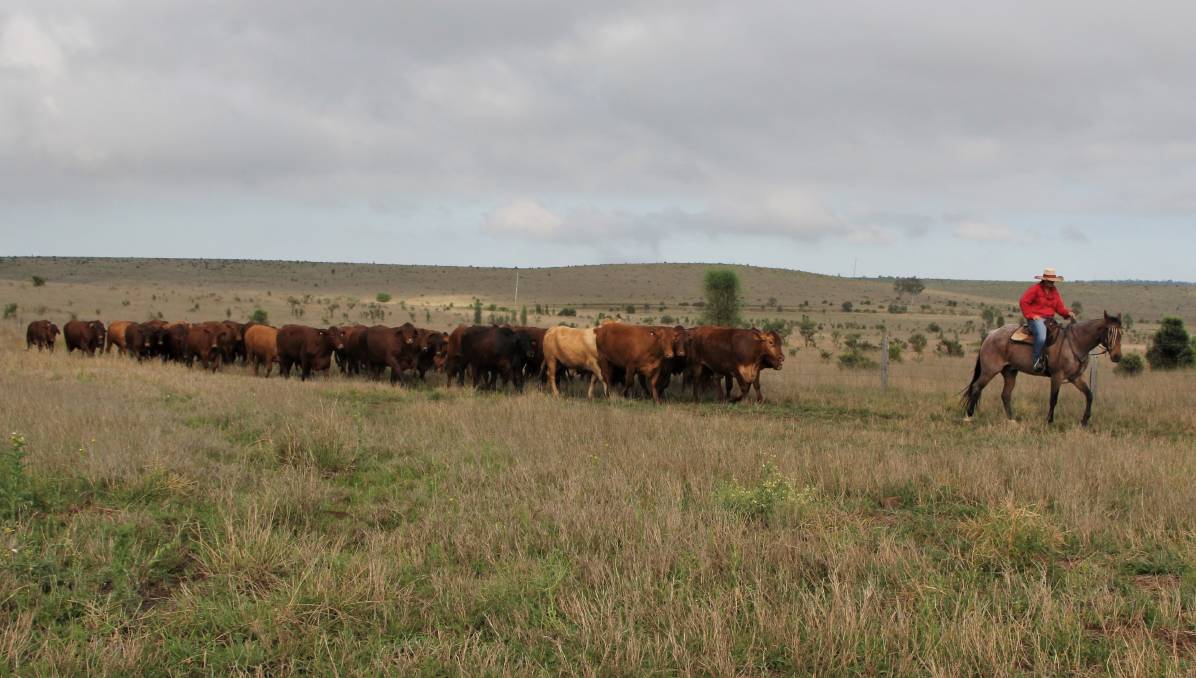 Jackie Hill leads No. 8 bullocks out of a buffel grass paddock at Dawsonvale, Taroom, into the yards ahead of trucking them to the meatworks.

The Pearson family's Bull Creek Beef brand has been organic since 2005 and maximising the value of every beast is what has been working for them in that time.

"There's not really a premium for organic cattle in the saleyards or the store market so for us, we need to finish everything," James Pearson said. "You don't see it much anymore and I know people think it doesn't make sense."

Selling cattle at a year old means they would have to run more breeders, which doesn't fit with their organic operations at McKinlay and Blackall, and the drier climates there.

As well, it means they have a 'cattle bank' up their sleeves.

"The steers are our main focus - all through those dry years, it was great having this place and having two years of cash flow stacked up in your paddocks," Mr Pearson said.

"If things turn bad or you get a tough time you can go to your bank and you've always got a couple of years up your sleeve.

"That's what we love about bullocks - we love coming to look at fellows like this."

It all began for Russell and Trish Pearson when they drew Bull Creek at McKinlay in 1967.

A block off Strathfield, owned at the time by NAPCO, it was bare of improvements and timbered largely with gidyea, which they pulled and blade ploughed to run about 2000 cows.

Russell, or Rusty as people call him, had a stock and station agency in Biloela at the time, travelling around in a Fairlane with a tin of petrol, according to son James.

He's bought and sold a lot of country on his own account since those days - Lara Downs north of Julia Creek fronting the Flinders River, Antion north of Cloncurry, Gilgunyah at Hughenden, as well as the Blue Heeler pub at Kynuna for a while, and constructing and running the Gidgee Inn Motel in Cloncurry to cater for the boost in mining there.

In 2001 the Pearsons bought the renowned Blackall Merino sheep stud, Terrick Terrick from National Mutual/AXA and developed it into a cattle property.

"It failed to bloody rain there often," James Pearson said.

As well as buying another Blackall district property, Allambie to supplement their grass needs for a while, they completely destocked Terrick five times in 18 years. 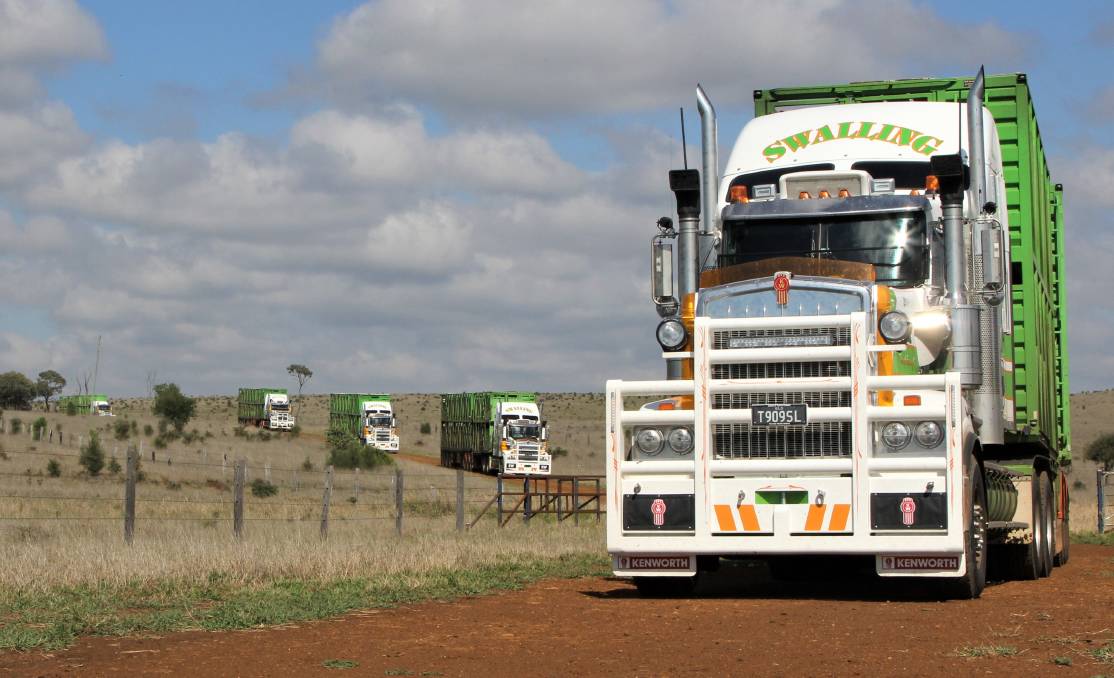 Five B-doubles were lined up ready to take the cattle, nearly 300 head, to Cannon Hill meatworks for processing.

"It wasn't a lot of fun, hence it forced us into buying this place, Dawsonvale, after we had three good years in a row, and 2014 was another dry year," Mr Pearson said.

"We had a lot of cattle and we needed to find a place.

"At the time it was too big for us but we were able to do a deal with the Furling family that worked for us and them."

The country lends itself perfectly to being a grass feedlot for the Pearson's organic operation, and has carried 3000 head more than would be expected at times, but is still turning big steers off in prime condition. 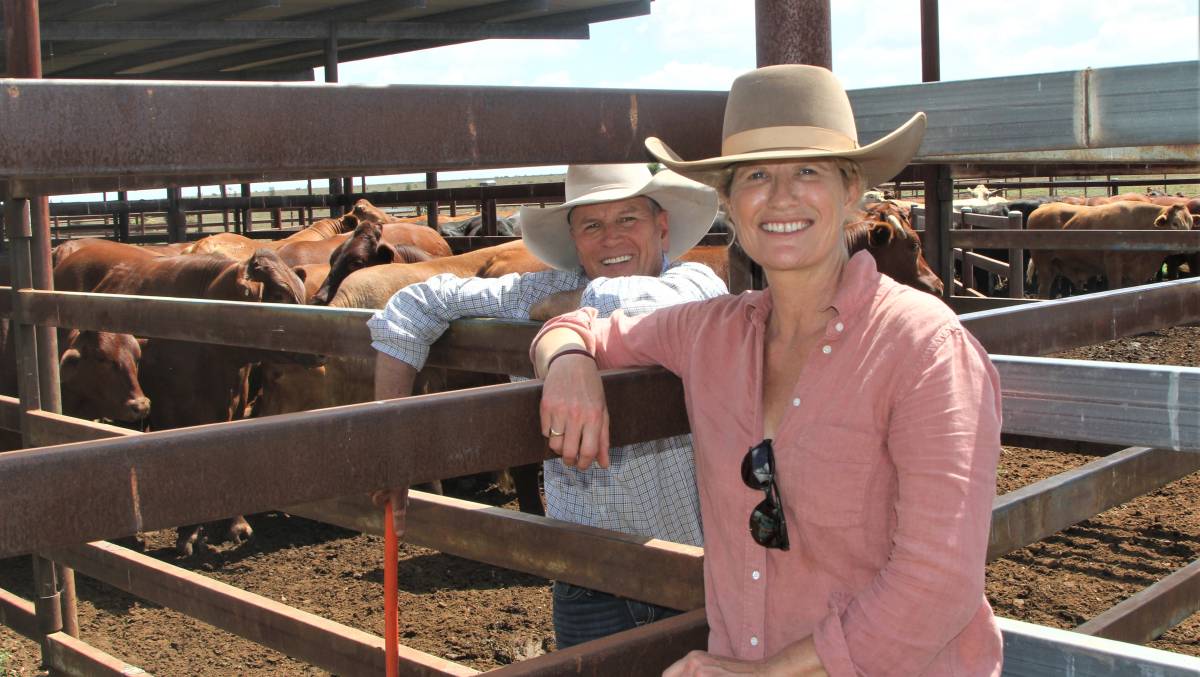 James and Sarah Pearson, Boorara, Blackall were on hand to see their finished bullocks load, to add to the Bull Creek Beef brand.

"The seven years we've owned Dawsonvale, from 2014 to when we sold Terrick, we actually ran more cattle on Dawsonvale than we did on Terrick, year-in year-out - it allowed us to keep our numbers," Mr Pearson said.

They sold Terrick to AAMIG and bought Boorara, also in the Blackall district, and hope to get back to turning off 1800 steers and 700 to 800 heifers a year.

Dawsonvale manager Peter Hill said the cattle were weighing heavier this year, thanks to 75mm in March that gave them a season, and 85mm in winter.

They already bale buffel grass hay to feed to young bulls they breed for their own purposes, and are developing 160ha to grow dryland oats to boost the weight of their steers in the back half of the year.

"Fifty-eight head eat two bales a week, even with a paddock of feed, plus a ration from Williams Stockfeed at Biloela," he said.

Their bulls aren't part of the organic regime. 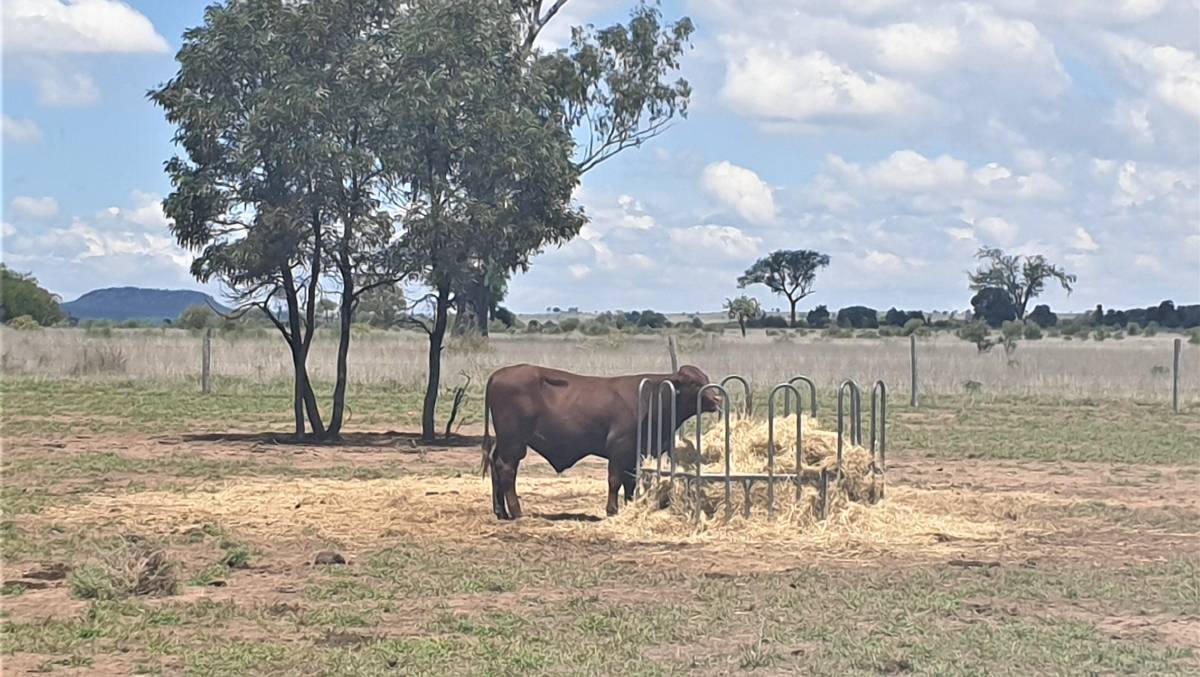 One of the young bulls eating baled buffel grass hay.

"We've always bred our own bulls - we'll go out and buy good bulls and put them over our stud cows - and this year we're we're upgrading a lot of heifers, going through the classification process, that will help us upgrade our female herd," Mr Pearson said.

Although they currently have Brahman and Angus cattle, thanks to purchases from Boulia to get numbers back up, Santa Gertrudis cattle are the Pearson's mainstay and suit their operation.

Mr Pearson said the breed did well both in the north west, the central west and at Taroom, and were easy to sell at the end of the day.

"We just want our Santa cows to wean a calf every year, and be quiet and big-framed," he said.

Dawsonvale is in clean country but the organic producers are very aware that the tick line isn't far away.

State government plans a few years ago to make changes to the tick line make them very nervous but feel that concerted efforts can keep the line from moving south.