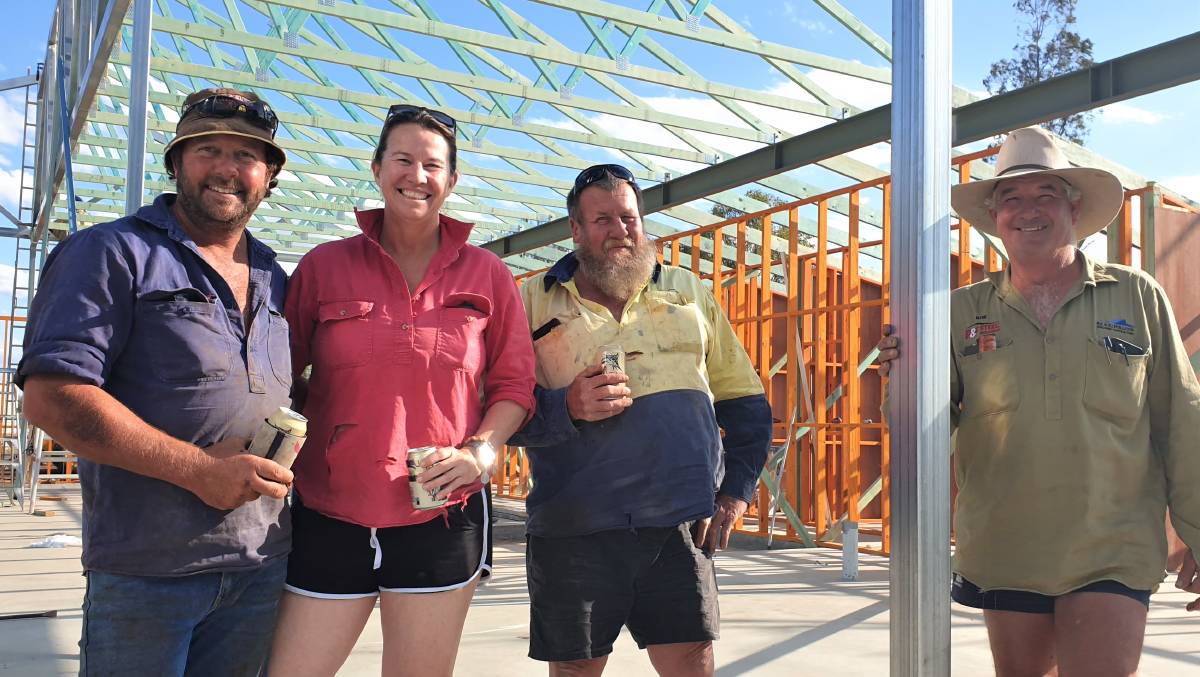 Friday drinks: There might not be a bar yet but Marty and Kristy Coomber were toasting the Mucka Pub's rebuild progress with machinery supplier Dave Carney while builder Rob Pollock stopped for a photo. Picture: Sally Gall.

If the friendliness and interest being shown in the rebuild of the Muckadilla Hotel is any indication, local mixed farmers Marty and Kristy Coomber are on a winner.

If the friendliness and interest being shown in the rebuild of the Muckadilla Hotel west of Roma is any indication, local mixed farmers Marty and Kristy Coomber are on a winner.

"Everyone's so supportive and helpful," Ms Coomber said. "We are so lucky, we've got a really good community."

The Muckadilla Hotel was destroyed by fire on the afternoon of August 8 last year, despite the best efforts of five QFES fire crews.

Originally built in 1912, it was the third time fire had consumed the local watering hole, but a new hotel this time around looked unlikely before the Coombers decided to take it on.

"It's a really exciting venture, we're just so keen for it," Ms Coomber said.

"We've been really stale ourselves the last few years, with the drought, not wanting to give up the farm and certainly not wanting to move from the area, but not knowing what else we could do to give ourselves a spark back.

"When we talked about this we were both beaming."

The idea of owning and running a country pub had never entered their minds but the emotional hole the fire left in the town of nine or 10 residents was a big one.

The area is home to hundreds of people on farms in the surrounding area and it had become the meeting place for many, even for a lot of Roma-ites and Mitchell people.

Ms Coomber said the hotel's owners, John and Sue McIntosh weren't going to rebuild due to ill-health and had moved away.

"We just decided, we'll have a go because it didn't look like anyone else was going to," she said. "The community hall down the road does a great job keeping us together with monthly barbecues and such, but it's set times whereas a pub's open all the time.

Despite its 2020 vintage they're aiming for a rustic country pub look, incorporating locally sourced ironbark logs for the verandah, as well as recycled bridge girders for exposed beams.

Some of the 108 years of history they've collected will go up on the walls of the new hotel, and more will decorate the six accommodation cabins that will each be named after a local farm.

In keeping with the heritage theme, they are planning old-style direct-pour beer taps from a coldroom rather than the glycol bar-top cooling system.

At the same time, a coffee shop and all-day grazing menu is on the design plan for 21st century patronage, complementing the normal pub lunches and dinners in the hotel proper.

The opening of Morven's Sadleir's Waterhole Hotel in early September, replacing the hotel that burnt down on April 26, 2016, has given the Coombers a lot of confidence.

"It's so good to have people there doing it as well," Ms Coomber said. "It's proving that we can do it no matter what your background is."

She acknowledged that it would be a "very expensive little venture" but said it wasn't a short term whim for them.

"We're going to be here for years," she said.

It's the first time Roma's Rob Pollock has built on a highway before and his work has become the centre of attention, not just from the local community but from everyone travelling the Warrego Highway.

"Robbie said this is the friendliest place, everyone toots and calls in," Ms Coomber said.

As to whether the locals will be toasting Australia Day in their new pub, Mr Pollock would only say it would be finished when it's finished.