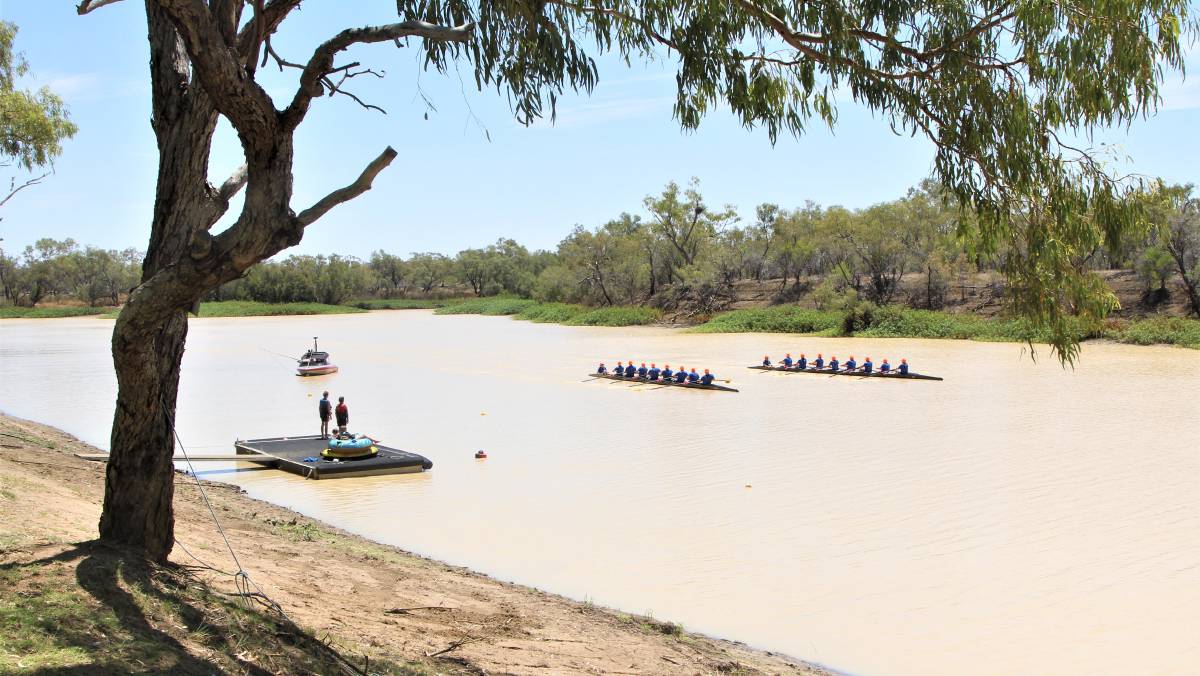 The two Vikings crews rowing in unison along the Thomson River outside Longreach on Sunday. Pictures: Sally Gall

Clad in royal blue shirts and bright orange bucket hats, the 18 men, all members of the Vikings Rowing Club in Brisbane, were in the throes of creating a little bit of history by rowing on six outback watercourses that have never before been rowed in racing shells.

The club, formed 10 years ago, is a men's health sporting organisation that 'aims to foster the pursuit of good health, competition and camaraderie to support working-aged men to be more committed to self-preservation and mutual support'.

Friendship is certainly top of the list - most conversations on the trip were punctuated with jokes at their own and each other's expense.

Only some in the club are Churchie old boys but they all value the ethos that their coach Ian 'Mattho' Mathieson says is a rare commodity in rowing clubs in the capital.

"Two have a good balance of camaraderie, friendship, support and openness - my home club, Brisbane and GPS, and the Vikings," he said.

"Most of the other clubs, if you're a flash rower, you would never tolerate a less experienced rower coming into the boat.

"We're still trying to win medals but it has a whole lot more to it, and I really enjoy that."

Mattho's approaching 80 and looking forward to rowing in J class (for Jesus you're old, one Viking interjects) but in the meantime says the trip is showing signs that his coaching tips might have paid off.

"As for preparation for this trip, I notice that there were meetings at a place called the German Club, in which there might have been a little bit of elbow preparation," he said. One of his rowers is Peter 'Poonch' Chandler, no stranger to the creeks and gullies around Barcaldine, who laughs that as the rower claiming two seat, he's the chatterbox who gets to talk about the real estate along the banks while the men in the stern do the work.

He coxed the 'Jeeps' Old Boys VIII in 1978 and at 167cm describes himself as being in the Valley of the Giants among his fellow Vikings, but more seriously, says he's probably the first member of the club that's had a heart attack while rowing.

"I actually did - I'm a recovered heart attack victim," he said. "(The club is) this nucleus of people doing something they enjoy and it does have flow-on effects of a men's shed, almost."

David 'Lebbo' Toohey, who says he's half-Irish, half-Lebanese and the president of the Terrace Old Boys, rows with the club three days a week.

"I made a joke - we have V1, the serious, V2, not so serious, and then there's gentleman's rowing.

"I did a joke logo for the gentleman's rowing and I had this thing that had gambling, drinking, sleeping in, cigars and straight after that I got told, you're a diabetic.

"So I pulled my socks up and got out of it. I'm not a diabetic anymore."

One of their spokesmen is Toby Ford, who said they had members from as far afield as David Counsell in Barcaldine, as well as others in Gympie, Boonah, Toowoomba and Beaudesert, who come to the city to row when they can.

Conversations hatched the idea of taking boats and people out west instead, and the plan to row on six rivers unfolded.

"I thought it would be really good to take people out to show them some stuff on the drive out, and Fraser, who didn't want to be on an old geriatric trip stopping at museums, mementos and memorials, said no, we have to row at a number of locations," Toby said.

"So that's how we came up with the six rivers.

As well as the Thomson, they've set up the two boats on the Condamine River at the Chinchilla Weir, on a private dam in the Maranoa River catchment, on Barcaldine's new artesian waterpark, and on Fairbairn Dam in the Nogoa River catchment.

The Dawson River weir at Taroom is the last on their schedule on Tuesday, before they watch the Melbourne Cup in Dalby on their way back home.

One of the participants, former Rowing Queensland CEO Murray Stewart said there was a vision for a Head of the Outback race that should come together once pandemic restrictions loosened their grip.

He said the Vikings wanted to drop boats in locations around the state to give mixed crews a chance to learn and train, with the aim of bringing their boats west to Longreach for the big race.

Ian 'Iggy' Smith said he had all the excuses in the world when Toby approached him to row with the club - he wasn't in town all the time - but Toby had all the answers.

"Toby refers to it as a men's health group, and it's so true.

"A lot of middle-aged men, what a great way to connect with each other, form a brotherhood, a fellowship, and do something good for ourselves physically and mentally, by sharing each other's company.

"Rowing is the reason why we're together but the other things are an added benefit."

The final word went to Poonch, whose brother Don Chandler has taken part in the 1200km Ridewest bike ride twice.

"It's funny because Don has done the Brisbane to Longreach ride twice but he was never a bike rider as such, and now he is," he said. "I hope one day I'm a great rower because of my association with this."