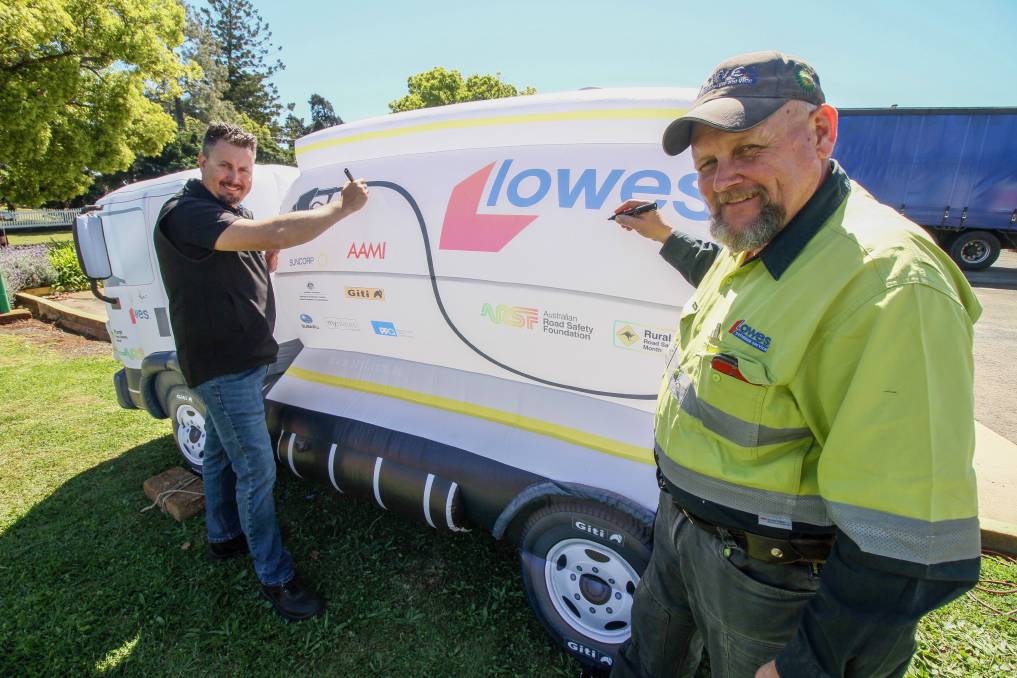 A three-metre inflatable fuel truck is being used by a fuel transporting company to raise rural road safety awareness.

Covering tens of thousands of kilometres a year in his B-double tanker, Toowoomba truck driver Nat Barton has seen more near misses on regional roads than anyone should in a lifetime.

"People overtake in situations they shouldn't, even on double lines and they speed in conditions where the road has a number of hidden obstacles; it's just crazy," he said.

That's why Mr Barton and his employer Lowes Petroleum are getting behind Rural Road Safety Month, which was launched by the Australian Road Safety Foundation in Tamworth this week.

Lowes has launched a rural roadshow using a three-metre inflatable fuel truck to encourage motorists to change their mindset and curb complacency on country roads.

Lowes Petroleum chief executive officer Cameron White said the inflatable replica fuel truck might be novel, but the message was deadly serious, with statistics showing two out of three road deaths in 2020 occurred on rural roads.

"With COVID restricting air travel, almost half of Australians are planning a driving holiday - more traffic on rural roads simply increases the risk for every driver on rural roads," Mr White said.

"There's the temptation to finish the journey, perhaps drive that extra hour while fatigued or speed.

"Often there's a perception that driving on country roads has less risk; that perception is wrong and that's why we're joining the ASRF to raise awareness of rural road safety."

This is not just rural Australia's problem, with ARSF figures showing almost all (94 per cent) of Australians use rural roads at least once a year.

More than four in 10 drivers use regional roads at least once a week.

The inflatable began its journey in Toowoomba, and will go to Lowes depots in Goondiwindi, Cairns, Townsville, Ayr, Mackay, Gladstone, Bundaberg, and finish up in Brisbane on October 7.