Plenty of Queensland families like the Mackenzies at Plevna Downs near Eromanga have stuck with Merino sheep through drought, dingoes and price fluctuations.

It's often said it was wool that Australia's prosperity was built on, and in 1935 in Queensland, that base was still very much in evidence.

It's often said it was wool that Australia's prosperity was built on, and in 1935 in Queensland, that base was still very much in evidence.

Although agriculture experienced severe setbacks during the Depression, wool was still a valuable commodity and the large stations provided a source of labour.

In 1935, drought had again ravaged the landscape and the lead article of the first Queensland Country Life was unsurprisingly devoted to dealing with that.

"The Premier (Mr W Forgan Smith) estimates that the total cost of the relief and assistance sought by the United Graziers' Association would be roughly £1,253,000 a year, exclusive of any reduction in unemployment relief," the newspaper noted.

Funds were sought for the provision of water on stock routes, while freight and fodder rebates were already in place and being increased from 40 per cent to 50pc for fodder.

It had been estimated that Queensland sheep numbers were 21.134 million compared to a figure of 55 million for NSW.

"Since then there have been the Queensland losses - we can only guess at them."

There were also hints of relief - "The rain has come and the rams will be on the spot" one advertisement reads, saying that the Longreach Ram Sellers' Association would offer 1600 from Queensland and NSW studs at Longreach on September 26. 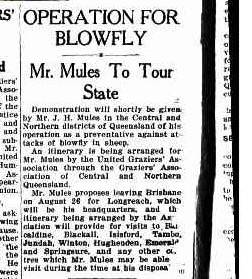 A 1935 QCL advertisement promoting a trip by the inventor of mulesing to demonstrate his technique.

Mulesing, which news reports are now suggesting may be phased out, was just being discovered 85 years ago.

According to an article headlined 'Operation for Blowfly', it announced that "demonstrations will shortly be given by Mr JH Mules in the Central and Northern districts of Queensland of his operation as a preventative against attacks of blowfly in sheep".

After the declaration of World War II in 1939, Queensland wool producers were reported to be generally satisfied with the price they were to receive from Britain under the Imperial Purchase Scheme.

"While some graziers are incensed - a few have even threatened to test the Federal Government's authority to dispose of their wool in such a manner - the big majority of growers are prepared to take a reasonable view in Fix this textthe expectation of adjustments being made at the end of the season," readers were told.

Reports over subsequent years spoke increasingly of shortages - in manpower to cut scrub in the droughts that came despite war, and in tyres and petrol.

By the end of 1944, when it became apparent that the Allied Forces were on track for victory in Europe, our correspondents were reporting that woolgrowers wanted to know if Britain would continue to buy their wool through to the conclusion of the war with Japan.

Although a national issue, Queensland Country Life keenly followed the debate on a reserve price for wool, such as a front page article in August 1945 announcing that a broad outline of the proposed wool agreement between the United Kingdom, Australia, South Africa and New Zealand had been shaped.

This sold the stockpile acquired during the war and was abolished in 1951.

The associated price rises peaked in 1950-51 when wool was 'a pound a pound' and Australia was said to be "riding on the sheep's back".

The 1950-51 national auction wool cheque was worth £636 million or an astonishing $33 billion in 2019 dollars, and the gross value of wool production represented 56pc of the total value of production of all agricultural industries.

The returns quickly fell away though - by September 1951, our front page reported the start of that, saying a hardening market "indicated that there is nothing in the nature of a slide, but that the absence of the extraordinary competition of several months ago has been causing a return to old values".

That decline bottomed out in 1970 and the Australian Wool Corporation established a minimum reserve price scheme in 1974, but not before woolgrowers again rejected such a scheme in a referendum in 1965.

According to newspaper reports at the time, the scheme's architect, Sir William Gunn, was pelted with food and verbally abused during a bitter campaign.

The aim of the scheme was to stabilise future large movements in wool prices by purchasing wool that did not achieve the agreed floor price and then selling it later in times of buoyant demand.

However in the early 1990s a combination of sharp falls in demand and high reserve prices, set during a period of high demand in the late 1980s, resulted in the scheme being suspended in February 1991, when the size of the AWC stockpile had reached 4.7 million bales.

Morven studmaster Will Roberts, now the president of the World Federation of Merino Breeders, described its ending as a terrible shame.

The reserve price scheme was there as a safety net but it got used to jack the price up. It was a wonderful system but poorly administered. Our leaders let us down - Will Roberts, Morven Merino breeder

Thanks to the excess wool, it was decided that a flock reduction was needed and graziers were paid to shoot their sheep in the early 1990s, something Mr Roberts described as "the dumbest idea ever dreamt up".

Labour disputes were a feature of the wool industry in Queensland until the end of the century but one of the longest-running was the 1956 shearers' strike.

It was begun when a prosperity loading was taken off shearers' wages when prices declined and they refused to shear for the new rate.

Blackall's Charlie Gall remembered being called home from school in Brisbane to press wool in an effort by local graziers to get their sheep shorn regardless.

"It was an educational time - graziers found they could do it," he said.

"Some people would come for a day's shearing, others for half a day.

A map showing the extent of the 1954 plan to erect a dingo barrier fence.

In 1952, we reported on a suggestion to fence all sheep areas of Queensland to combat dingoes, as far north as Cloncurry, made at the annual Western Queensland Local Government Association conference, in Longreach.

"Brisbane suppliers thought Queensland graziers were pulling their own legs if they thought dog netting could be produced in quantities needed to erect £100,000 worth of fencing," the next edition noted.

Two state sheep show reports written 43 years apart highlight some of the changes made in breeding sheep in Queensland over the years. 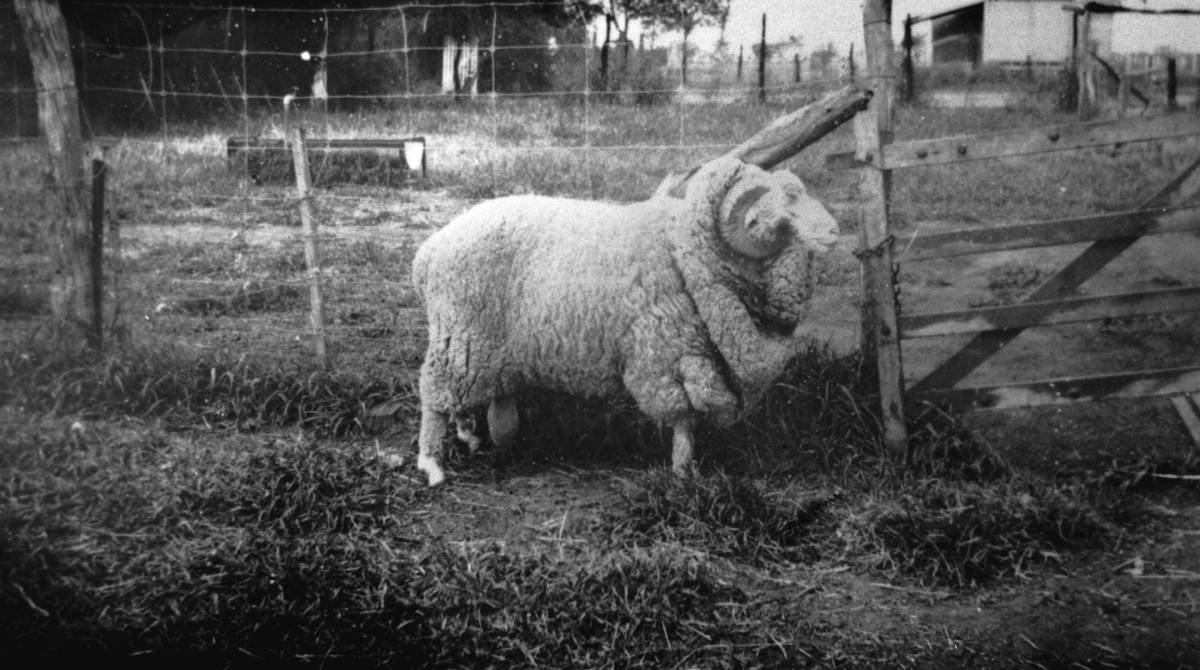 A stud ram from Terrick Terrick at Blackall, taken in 1940. Picture - State Library of Queensland.

A 'special representative' reporting on a school for studmasters at Tambo in September 1954 was able to report that fleece measurement had won many new supporters by showing that fleece testing as an aid to present methods of classing would treble the rate of genetic progress.

"It was agreed that fleece testing at this stage be directed only at measuring a stud's reserve rams," the article said.

"Wool today is the best the processing industry has got its hands on," Mr Roberts said.

"Some of that is from testing and getting people to look at fleece testing as a method of classing. So much has been learnt from adversity - we're a much better industry now."