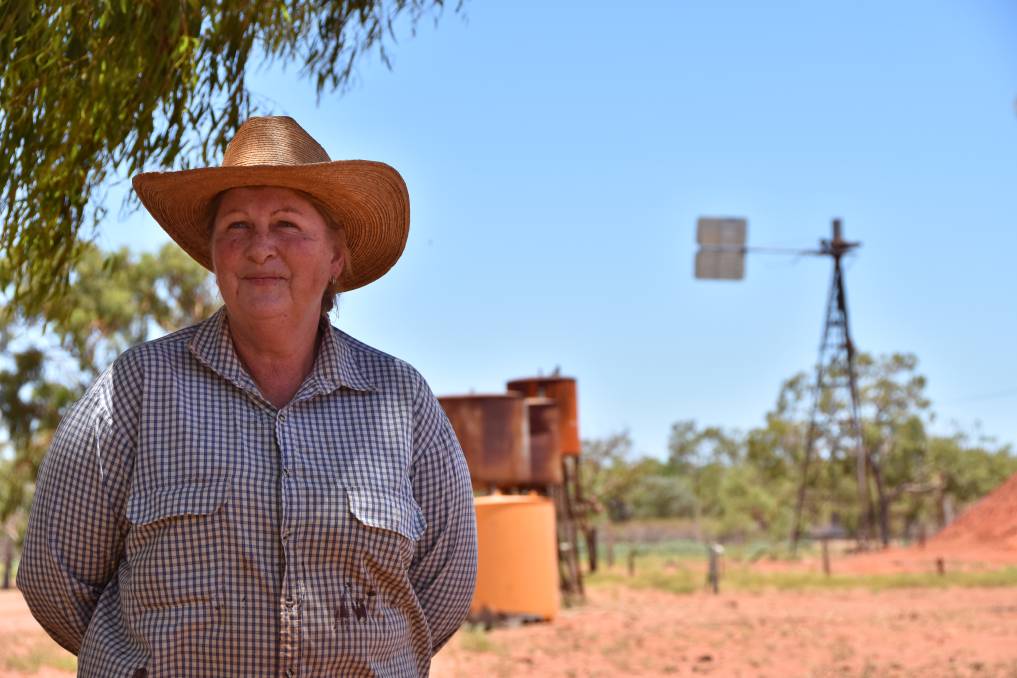 Producers are the ones who will have to live with any long-term impacts of mining in the Great Artesian Basin, beef producer Jenny Todd says.

Producers will be 'stuck' with mining impacts, Jenny says.

A small garden sits like a tiny oasis in the middle of Winhaven Station, a 12,000 hectare cattle property about 50 kilometres east of Aramac.

Jenny Todd is outside, drinking her second coffee of the day and watching as the sprinklers give her roses a morning drink.

She planted the garden six months ago to break up the view of scrub bush that spreads from her spot on the porch.

It is easy to see why water is so precious in this part of the world, and why many producers are nervous about the long-term impacts of coal mining in the region.

"At Winhaven we are totally dependent on bore water," Jenny says. The front garden at Winhaven Station, a small patch of green standing out against the dusty landscape.

"We have shallow dams which fill up when it rains, but ultimately they end up drying up.

"As graziers, we are allowed to extract underground water, but we are only allowed to use it for stock and domestic.

"So that means it waters our animals, keeps the house and gives a tiny amount of water to keep a small garden."

Winhaven, which runs about 400 head of Brahman-cross and Droughtmaster cattle, lies within the Galilee Basin.

The Galilee Basin is a coal deposit sitting within the much larger Great Artesian Basin, one of the world’s largest groundwater resources and the source of the vast majority of freshwater in inland Australia.

Producers are worried coal mining in the Galilee Basin is going to irreversibly damage the groundwater flows that run like lifeblood through their properties. According to Jenny Todd, Winhaven Station east of Aramac is entirely dependent on bore water.

There was enough detail in that study to examine the combined impact of seven coal mines, while 10 proposed mines were not included due to a lack of information.

Jenny, who worked in community relations and stakeholder engagement for Glencore and other energy companies before life in the bush, sees the issue from both sides.

"The mining companies do some great work with modelling to predict impacts and things like that," she says.

"But at the end of the day, they are not 100 per cent sure that what they do won't have an impact.

"It's OK for them, because they can just walk away. But the graziers and the farmers are stuck with it."

It is the uncertainty that nags at Jenny; why take the risk, however small it might be, of permanently damaging a precious resource like the Great Artesian Basin.

Adani's Carmichael coal mine has the highest profile of the projects in the region.

Controversy has surrounded the amount of water Adani might need for the mine, such as reports that Carmichael could take as much as 12.5 billion litres a year out of the Belyando/Sutton river system.

Adani says this amounts to less than 1 per cent of the annual water flow through the system. Jenny Todd sits on the front porch at Winhaven Station.

"The other argument is that the Great Artesian Basin has so much water that Adani or another mine would hardly make a dent in it," says Jenny.

"It's not so much how much water they use, but with the drilling and all of that, it's how they might affect the flow of the water.

"There still may be tonnes of water left in the basin, but because of the changed flow a property might not have access to that water anymore."

Other mines slated for the Galilee Basin include the 20,000 hectare China Stone project, Clive Palmer's Waratah coal project, and the Kevin's Corner and Alpha mines proposed by GVK/Hancock Coal.

One legal instrument designed to protect producers is the "make good agreement", put in place to compensate landholders if water bores are impacted by a resource project.

Proving a bore has been impacted, and who did the damage, could be difficult with multiple mines operating in the area, Jenny says.

"...if you don't have significant historical records for water, it's very hard to prove which mine caused the problem.”

Jenny concedes that there is no easy short-term solution, and says the last thing she wants to see is hundreds or thousands of mining jobs go to waste.

"You can't just put a blanket ban on mining tomorrow. The word transition is used a lot, and that's the really important part."