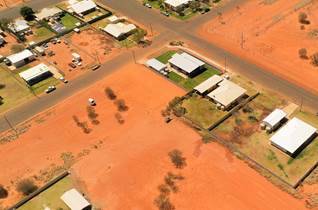 With over 600 people expressing interest in Quilpie's new residential blocks, council has decided to send them to auction.

Quilpie Shire Council has decided to send sought-after residential blocks to auction after the announcement of its $12,500 house building grant triggered an influx of enquires.

QSC CEO Justin Hancock said with more than 600 people eager to buy land and build, an auction was the fairest way to sell the blocks.

"The calls came thick and fast and we had quite a few of our staff manning phones just to keep up," Mr Hancock said.

"As a result, there has been no way for us to log or confirm the order of calls. So in fairness to everyone we've decided to stage an online auction. All eligible registered buyers will have the opportunity to purchase land."

Initially, ten blocks of land will be offered in the online auction on December 7 and 8.

The auction is being managed by local real estate agent GDL, with the site going live for registrations on November 30.

The grant is underwritten by council, giving anyone who purchases a block of land in the Quilpie Shire the opportunity to have $12,500 reimbursed when they build and live in the new house for a minimum of six months.

The offer is made in addition to other first home owner government incentives.

"We're excited that by mid-December we will have a group of new residents making plans to build and live in Quilpie," he said.

"We had expectations of selling five blocks across the next two years and here we are on the brink of selling ten blocks in the first months of our grant offer being made public.

"It shows the appetite that is out there is for people looking for an easier way to live, with more space and freedom -and for those who have been priced out of buying in major metro or coastal regions."

He said local businesses who have been advertising employment opportunities were also excited that this would translate to positions being filled.

Mr Hancock said the auction would create a true market value for the land, and if blocks sold for higher than anticipated, council would reinvest any funds made into the council grant program, allowing it to open up more land to more people.

"There are currently blocks of land for sale in Quilpie for around $17,000, so we're not expecting a runaway result like The Block's TV auction," he said.

"The blocks will be excellent value, particularly when the new owners build and live on them."

A council meeting will be held on December 10 to assess the stage one auction results and to determine stage two of the sale of land.