INPUTS UP: Urea and glyphosate prices are rising due to unexpected market events.

Key cropping inputs continue to rise on the back of high energy costs.

Farmers looking to secure inputs for next year's crop have been getting a rude shock, with urea prices hitting a 13-year-high, China 'banning' phosphate exports and glyphosate prices surging.

Urea prices were at A$756 per tonne (overseas pricing levels; not shipped to Australia) on Monday and rising, while glyphosate has jumped to about A$11/kg, up from A$5/kg two years ago.

According to Thomas Elder Markets, it currently costs 2.2 tonnes of wheat to purchase one tonne of urea. The average has been 1.38t for 2010 to 2020. 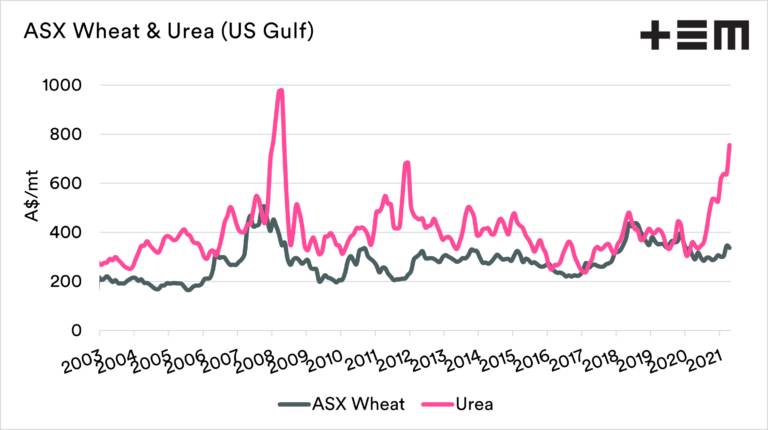 UREA JUMP: The price of urea compared to the price of wheat in Australian dollars per tonne. Source: Thomas Elder Markets.

Last week the Chinese national government announced there would be a several changes to phosphate production policy to help keep down domestic prices.

On a monthly average, Australia imports 65pc of its MAP from China.

TEM analyst Andrew Whitelaw said prices were "liable to remain quite high for the foreseeable future".

"The likelihood is that based on the indicators driving fertiliser pricing that we will be in a high priced environment right through until seeding," Mr Whitelaw said.

However, Mr Whitelaw said China was not the only source for fertiliser and there shouldn't be access issues.

"Australian importers are likely going to have to look at switching origins for our DAP/MAP, but with urea there will likely just be a slight reshuffling," he said.

"I don't think we will struggle with access. There always seems to be 'scarcity' calls every year for fertiliser, and we somehow always manage to get access to our overall requirements.

"Even throughout the COVID crisis, we have still been able to import large quantities of fertiliser."

Read more: Bayer set to phase out domestic glyphosate products in the US

"Expectations are that due to the higher energy costs during September, with coal up 42pc since the end of August, we will likely see increasing glyphosate costs," Mr Whitelaw said.

"This is another stinger and is an additional cost on farmers, which was not expected." 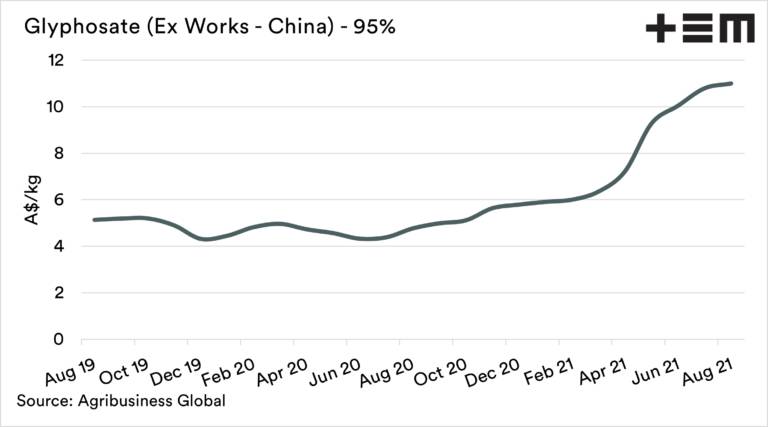 Where to from here?

MCA Agronomy director Paul Gardoll, Goondiwindi, said his reports forecasted tight fertiliser stocks, but most of his clients would continue with a program similar to previous years.

"Urea and starter fertiliser, from our reports, are going to be tight and expensive, but this early out, we probably won't change too much from what we normally do," Mr Gardoll said.

"We'll see how the summer develops, put in some forecasts and try to access some herbicides early.

"The real issue with dryland farming is what we think is going to happen today may or may not eventuate in the future. You can flex your program a little bit but you can't flex it too much."

Mr Gardoll said he was looking at soil testing, previous yield history, and rotations with clients to see where they could benefit most.

"You can also look at some of the technologies available - whether it be camera spraying for herbicides and variable rate technology for fertilisers - to get the best bang for your buck from what products are available," he said.