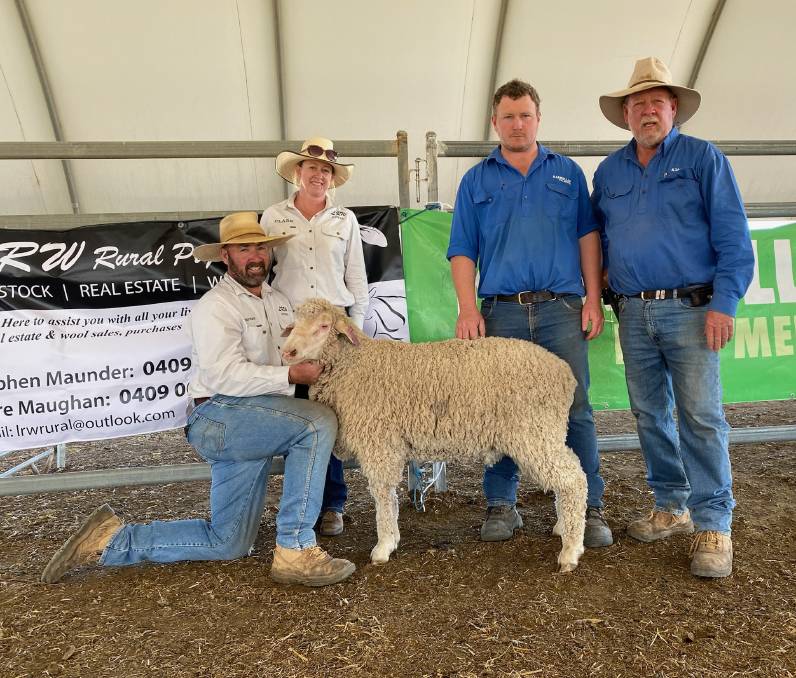 It was a big jump from last year's $6600 top price, and helped Karbullah to a $2271 average, 46 per cent higher than last year and an all-time record for the stud.

The surge in price was on the back of a huge number of online bids per second, overwhelming the new helmsman FarmGate auction system on the original September 20 sale date.

"It was astonishing," Mr Murphy said. "The confidence in the industry has never been higher and the demand for genetics with proven productivity is very reassuring."

The top ram was a twin born from a maiden weaner ewe six weeks behind the rest of his drop, but breeder Mark Murphy said he'd caught up fast in the weeks preceding the sale, indicating his potential.

"The good thing about breeding values is that you can get an idea of a ram from an early age," Mr Murphy said. "This is one we might have used ourselves - he'll be a genuine asset to the Glenwood Merinos genetics program."

Buyers Norm and Pip Smith were chased all the way by a commercial buyer from Queensland, and Mr Smith said he could understand why, given that Karbullah's unique trait for lamb survivability would translate to any environment in Australia.

It was that plus the ram's yearling weight gain, fertility, fat and worm egg count, all strong genetic traits, that sold the Smiths on him, more so than his 99.6 wool comfort factor and other wool traits.

"We've been using Karbullah genetics for 20-odd years but in the past have only used frozen semen," Mr Smith said. "We particularly went looking for worm resistance figures but this ram offered a lot else."

He said their decisions weren't just about wool these days.

Seventy per cent of the catalogue was born as twins, while 5pc were triples and the remaining 25pc were singles, which selling agent Steve Maunder, LRW Rural said was valuable information for those rebuilding flock numbers.

"Bids were coming in from all corner of Australia," he said.

Mr Murphy said they'd seen how effective the genetics were at influencing fertility and lamb survivability in a flock, and had decided it was time to add Karbullah rams to their breeding program.

Fifty-five per cent of the offering went to NSW, 42pc to Queensland, and 3pc to South Australia, resulting in a 100pc clearance despite offering 27 more rams this year.

"Vast areas of Queensland are still subdued, where clients are patiently waiting for rain, but NSW has had two cracker seasons back to back now," Mr Murphy said.

The second top price of $6200 was paid by an undisclosed buyer from Thallon, while Winton's Shane and Jodi Axford purchased 17 rams to be the sale's volume buyer.

"Last year's average was $1550 but this year, everyone seemed to dig a little deeper. Our long-term clients definitely wanted their picks," he said.

While the sheer volume and speed of bidding crashed the online platform on the original sale date, Farmgate's development team successfully reset the auction for last Friday.