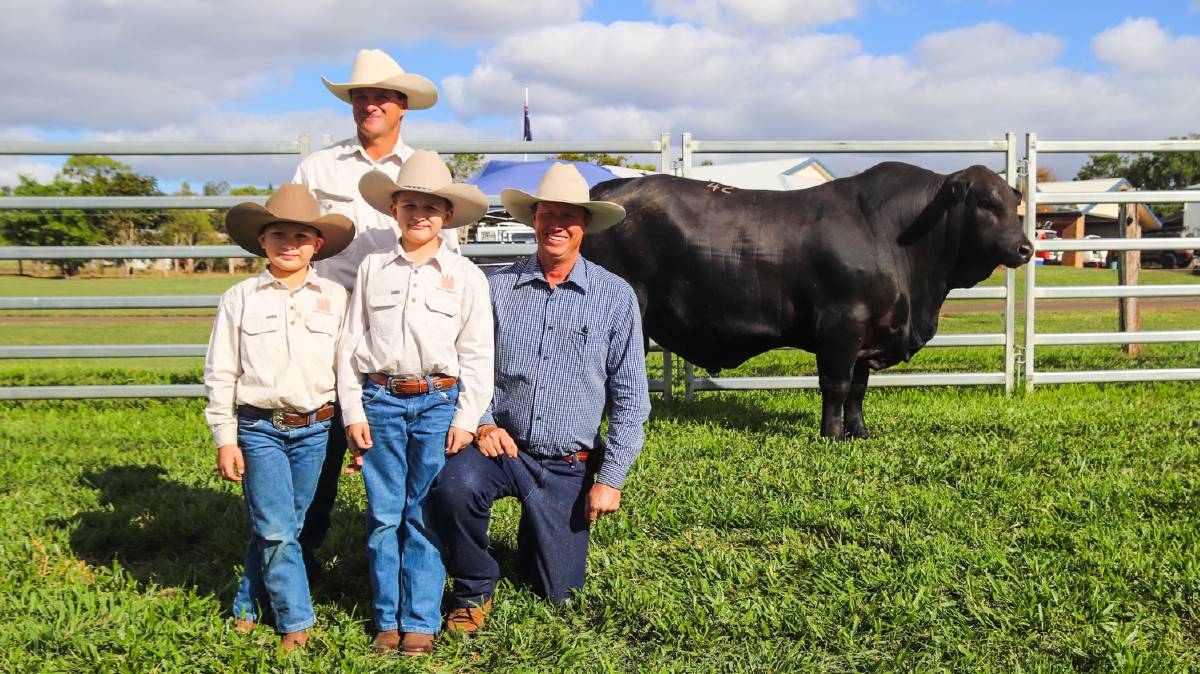 The sale was held at the stud's bull block at Tolga, Far North Queensland, with its location doing little to deter buyers from all over Australia bidding for a slice of some of Australia's best Brangus genetics.

The sale started with a bang, with a three-quarter share in Telpara Hills Business Class 302Q attracting a sale topping bid of $50,000, from Lindsay and Fiona Barlow, Triple B Brangus.

Having done extensive homework on the bull, Mr Barlow made the 1100 kilometre journey from his Dingo property to eyeball Business Class in the flesh.

"He ticked a lot of boxes," Mr Barlow said. "When you breed bulls and get to the level where you are hosting your own sale, you have to try and source bulls that tick a lot of boxes.

"For us, we know the pedigree. His mother is Csonka which we have heavily used ourselves, and grand dam is 789G5, which is one of the first original bulls we used out of America.

"He will go straight to an AI centre and be collected and come the end of October/early November will go out with 50 stud cows and we'll also use him in an AI program with 150 females."

Volume buyers Drew and Lisa Callander, Oakdale, Mackay, who run a Brangus commercial herd, purchased 10 bulls at an average of $15,300, a decade after buying their very first bull from Telpara Hills at a Rockhampton bull sale.

"We like their softness, and they are well bred," Mr Callander said. "They always improve their genetics. The weight-for-age in these 10 bulls is impressive."

Other volume bull buyers were GP and LJ Cameron, Meadowbank, Mt Garnet, who purchased 12 bulls to average $7333, and Urella Pastoral Company, Urella, Clermont, who walked away with 11 bulls for the day at an average of $10,181. While the action was hot in the bull ring, it was the females that set the new bar, with this year's average in the heifers up nearly $7000 compared to the sale's 2020 average.

Currently based in Singapore due to work commitments, Hidden Valley Speckle Park directors Peter and Roz Alexander will use Miss Magnum in their high-quality Brangus female program, crossing with Speckle Park genetics.

"Miss Magnum is a lovely feminine heifer who is deep and soggy," Ms Alexander said.

"She moves really well and has a frame that we are looking for. We believe when crossed with moderate Speckle Park bulls she will generate a very powerful, handy cross with hybrid vigour.

"In addition, her EBVs are excellent, in the top 10-15pc, in particular for the attributes we want to breed for."

Telpara Hills founder Trevor Pearce was humbled with the result.

"We had very strong repeat buyers but also a number of new people and we sold cattle all over Australia to people we have never heard of.

"I think we have made a statement and our product is being accepted as a very superior product in the Brangus world.

"The experiments that we did 10 to 15 years ago in America is driving through very strongly now and we are getting a roll-on effect on how powerful those donors were."