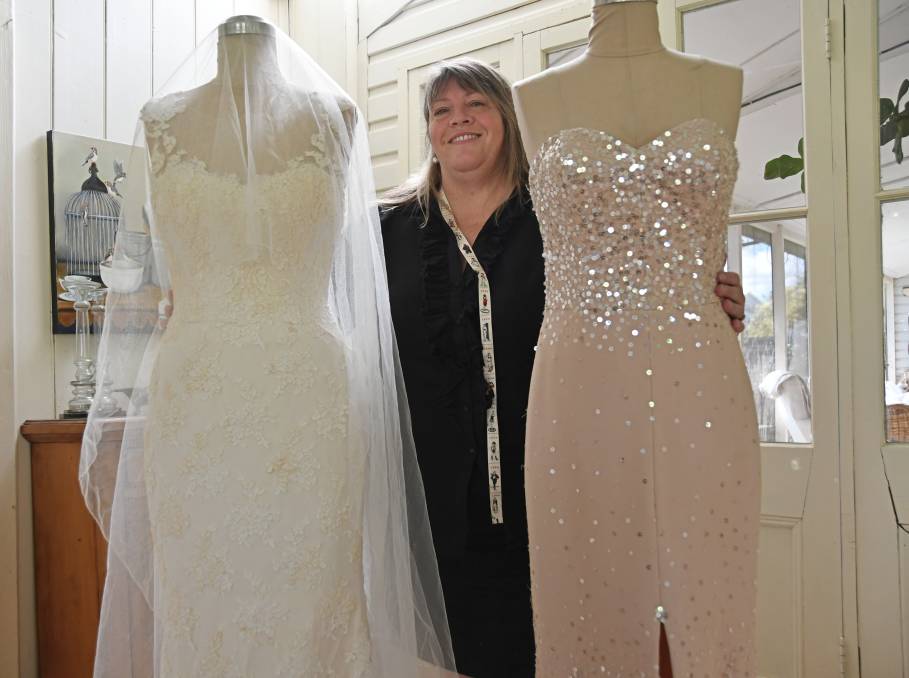 Melinda O'Donoghue has hand crafted wedding dress for brides from across NSW and as far away as America. Photos: Billy Jupp

In a family farmhouse in the state's North West, many bride's dreams have come true thanks to one of the state's most in demand dressmakers.

IT can make or break any bride's big day.

Guests will remember its colour, the pattern and every last stitch long after the celebrations have concluded.

By her admission there is "something magical about a wedding" and despite lovingly and carefully handcrafting wedding dresses for more than two decades, Melinda O'Donoghue still gets a thrill out of being a part of the experience.

In the front room of her family's Gurley property Kirramingly, near Moree in the state's North West, the hum of a sewing machine will fill the house as she is busy making dresses for brides-to-be from across the state and beyond.

Brides from all over NSW and from as far away as Queensland, Perth and even America have enlisted Melinda's help in creating the perfect dress for their big day.

"For some ladies the first concept might be exactly what they are looking for, while for others it can take up to 10 attempts.

"Either way I will keep going until I see that certain expression on their face that lets me know that they love it.

"It can be subtle but every bride has that same look and when you see it you know."

Originally hailing from a mixed production property at Ariah Park near West Wylong in the state's Riverina, Melinda moved to Bellata near Moree after a whirlwind romance with her husband Des.

"After I left school, I worked in retail before going to Canberra Institute of Technology but I've always sewed," Mrs O'Donoghue said.

"From there, I came home and looked after our neighbours emu farm while she was sick and I met my husband during all of that and he asked me to marry him after just two days.

"He's originally from Cann River in Victoria and three days after we got married we moved to Bellata before eventually settling into our 28 hectare block here at Gurley and raising our kids William and Kate."

Brides from across regional NSW and Queensland have walked down the aisle in a dress created by Melinda, all of whom she said had found her in the same way.

"I've never really advertised, so anyone who comes to me is through word of mouth," she said.

"I think it is a real privilege to be given such an important job in a couple's big day.

"I always like to be there on the day to help dress the bride because there is always a lot happening and having someone there specifically focused on helping you look your best in the dress is so helpful.

"Usually, I am one of the last people to see the bride before she is walked down the aisle and to me it is one of the most special moments that gets me every time." Despite making wedding dresses for more than 20 years, Melinda says it still gives her a thrill.

Teaching sewing at Moree Tafe during the week, Melinda's works were thrust into the spotlight last year in the form of an exhibition at the Bank Art Museum, Moree (BAMM).

"The exhibition was just so special because it had about 80 dresses from across the 20 years I have been doing it as a bit of a retrospective," she said.

"Myself and a local artist Jo White did it together, which was so much fun and overall I think we had more visitors than the Archibald.

"It was an epic seven-week exhibition in which all of the dresses were sent to me by the brides who wore them, so it was really special for them too to see their dresses again. We did tours a few times a week and it was just so nice to see many visitors come to BAMM and to Moree in general.

"It felt really nice to do something for our local tourism, albeit in a small way."

Like many corners of the industry, Melinda has dealt with many hurdles caused by the COVID-19 pandemic.

"Organising a wedding can be so stressful anyway, so to see how much harder this pandemic is making things for couples makes me really feel for them," she said.

"As for me, it has not been as bad but with so many people rescheduling their weddings for early next year, I am going to be quite busy come January and February.

"However, it really doesn't bother me, I just hope things can return to a bit more like normal for everyone's big day."

The dresses Melinda has created are as different as the brides who wear them.

No two colours or patterns are the exactly the same but each leaves the crowd of family and friends who watch the bride wear it down the aisle remembering it right down to the last stitch.

There really is something magical about a wedding.

The story Unbridled passion: magic of weddings created in Gurley first appeared on The Land.