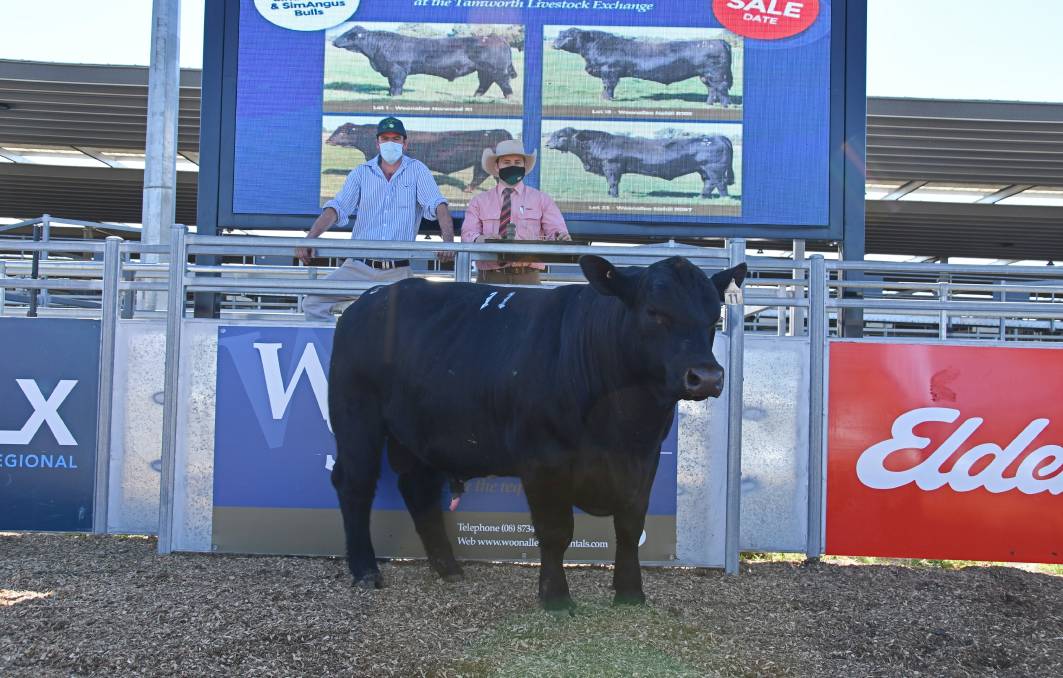 The South Australian stud achieved a $9547 average at its first Tamworth sale.

More than 30 registered bidders gathered at the Tamworth Regional Livestock Exchange to get their hands on the 42 Simmental and SimAngus bulls being offered by the Baker family, Millicent, South Australia, while many more followed the sale online via AuctionsPlus and Elite Livestock Auctions.

In total, 40 of the 42 bulls up for bids were sold during the live auction, while two more were sold shortly after the sale's conclusion bringing the overall average to $9547 and the clearance rate to 100 per cent.

Competition for the top-selling bull, Woonallee Q527, was fierce as bids flooded in online and from bidders in attendance, however the Parkins family, Rosemount, Gulgong, claimed the winning bid at a sale-high $31,000.

The 24-month-old homozygous polled and homozygous black son of Woonaleee Nobel Prize and out of Woonallee Bettis M202 was ranked in the top 10pc of the breed for 200-day weight, rib and rump fat as well as the Northern Terminal and Vealer Terminal Indexes.

"The top bull and the lot three bull were both really appealing," buyer David Parkins told The Land.

"The lot three bull was a lot younger than the top bull, but not too much lighter, which was really promising.

"They both had good depth, a lot of bone in them and we aim for our cattle to be a bit higher in the dressing mark around 400-450kg dressed, so we're pretty happy with them."

The Parkins also took home the second top-priced bull, Woonallee Lieutenant R293, which sold for $26,000, finishing with three bulls at an average of $22,333.

Mr Parkins said the three bulls would go straight to work on a commercial herd.

"We've got about 500-odd breeders and we used to purchase from Wombramurra at Nundle, which Woonallee bought, so we have the confidence in the pedigree," he said.

"I think they'll be pretty well suited to our country and our operation."

"We've been talking to the Parkins' along the way and it's great they have shown faith in us and did what they did today [Wednesday], it's outstanding."

Wednesday's sale marked the operation's first in NSW after purchasing the Wombramurra Black Simmental stud herd 18 months ago, and Mr Baker said he would count the sale as a great success.

"There was a couple of reasons why we wanted to do a sale in Tamworth, the first being that we purchased the purebred side of Wombramurra herd and they used to have a sale there, so we thought we would continue doing that," he said.

"That was the inspiration behind it, but we also knew we had to bring the cattle to the people if we are going to grow and expand our business.

"It's probably a bull business of more than 300 bulls now and we need to take them to the people and give them the chance to buy them, rather than have them come down to us once a year down south."

"I think you never really know going into these things and when you start any new venture and you start well like this you're going to be happy," Mr Baker said.

"The full clearance is what is all about and when you're able to pencil that in you have to consider it a good hit out.

"Lizzy and I are just so grateful to all the buyers, under bidders, Lincoln McKinlay and the entire Elders team for making this such a successful sale.

'We look forward to returning next year and hopefully COVID-19 won't prevent us from being there in person."

The sale was conducted by Elders, Tamworth with Lincoln McKinlay auctioneering.

The story Woonallee makes grand entry into Tamworth with $31,000 top first appeared on The Land.