The lockdown forced Ben Jackson to stay away from his aunt's funeral, so he turned his paddock into a living, breathing memorial.

When border restrictions kept Ben Jackson from attending his beloved aunt's funeral in Brisbane earlier this week, he turned his paddock into a breathing memorial to her.

Spreading sheep feed across the ground in the shape of a giant love-heart, the farmer managed to capture on film via a drone as his flock formed his tribute.

"I'm here in Guyra NSW, it's only a stone's throw from Brisbane," Mr Jackson said. "When you drive up there, you get there before smoko."

"With hard borders, quarantine and restrictions there was no opportunity for me to sneak up there and say cheerio.

"You feel helpless, you don't know how to express yourself or what you can do to show your deep affection for a loved one, so I did a big heart. It seemed like a pretty good idea to share the love." 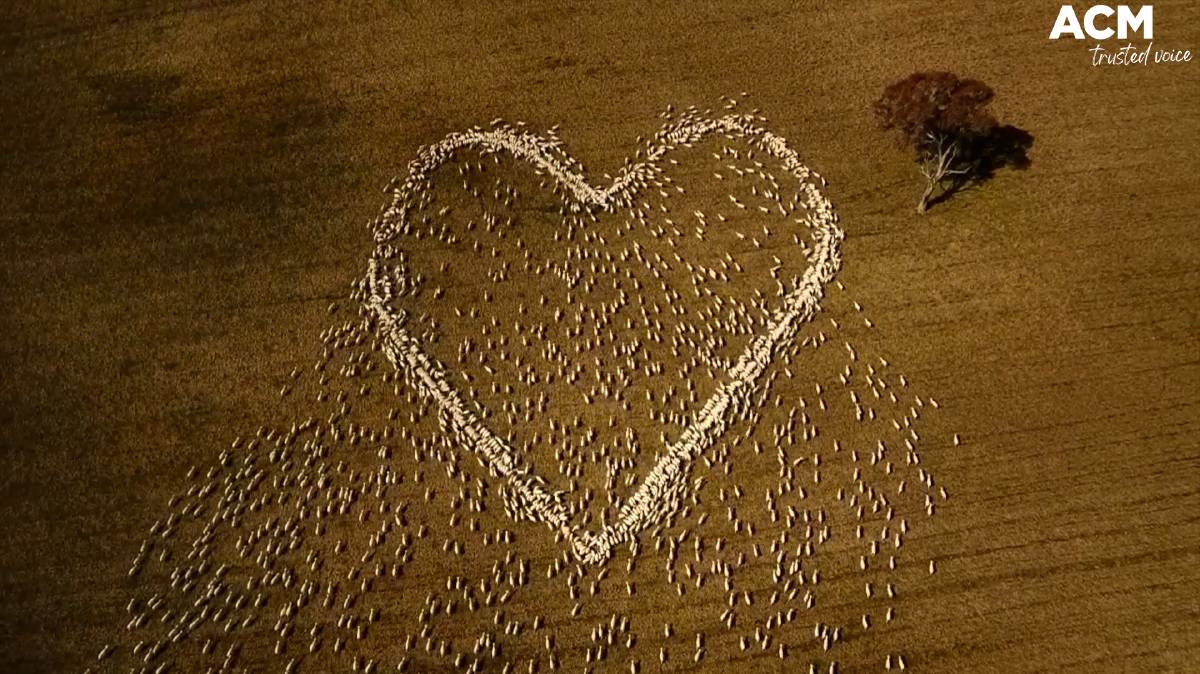 MOVING TRIBUTE: Ben Jackson created a living, breathing tribute to his Aunt Deb that was played at her funeral in Brisbane on Monday. Picture: supplied

As a result of the COVID-19 restrictions, the last time he was able to see his aunt was back in May.

"There were a few FaceTimes and all that stuff, but nothing prepares," he said.

"Losing someone, it hurts. Everyone will lose someone and it will hurt, but adding onto that the lockdown and border restrictions, it's a weird and pretty traumatic experience.

Mr Jackson's aunt spent a lot of time at the farm, but the change in climate between her sunny life in Brisbane, and the cool air of country NSW was always an adjustment.

"Every time she came down to the farm, she had to wear four or five layers and it was in the middle of summer. She didn't like the Guyra cool."

Mr Jackson lives on one side of the Guyra property while his parents live six kilometres away at the other boundary.

The lockdown has made it hard for him to have connections with even his neighbours.

"There's been a few chinwags over a boundary fence. Everyone is abiding by the health orders, but we'll wave as we're going past. It's quite a collegial experience.

"Even though we're forced to be apart, it's forcing us together. It sounds weird, but it is what it is."

The heart for his aunt was not the first experiment in 'sheep art' Mr Jackson has ever made, but it was certainly his most meaningful.

Over the years, he's spelled out names and logos on his paddock with his sheep.

He began the works on the eve of the State of Origin in 2018 when he wrote 'Go Blues' in the sheep.

"It irritated the absolute crap out of some Queenslanders, you have to stir them up every now and then," he said.

It was at the height of the drought, and Mr Jackson was looking for a way to "keep buoyant as we faced the dessert that was the New England at that stage".

"It was getting pretty difficult and essentially I started writing logos and artists' names basically to keep my serotonin levels up and bring a smile to my own face, and hopefully keep some other farmers around here upbeat," he said.

The situation has certainly turned around since then, but the sheep art has remained a staple in Mr Jackson's creative farming practices.

"Admittedly we've had sensational rain, I've been looking at various websites trying to figure out how to bring an ark because there's been that much rain,"

"Certainly more is welcome, I hope I get bogged this afternoon because I never want to live through another drought like that."