Competition was fierce at Clarke Creek, with competitors receiving back to back wins. 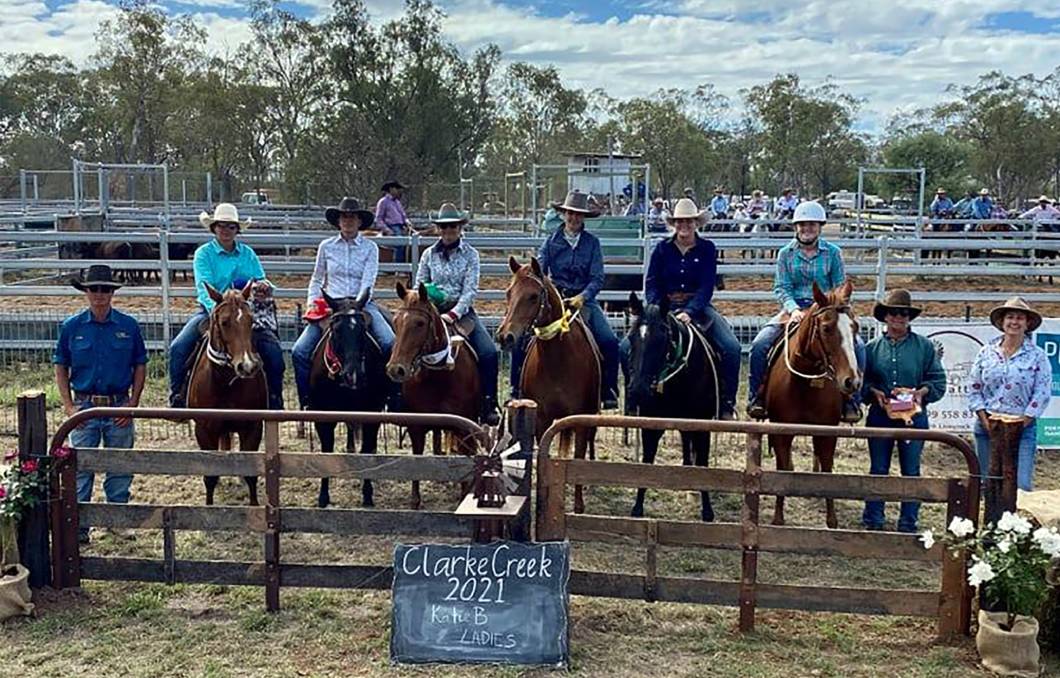 Competitors travelled from near and far to join in on the campdrafting action at Clarke Creek over the weekend.

The program kicked off at the crack of dawn on Friday with the Graeme Acton Memorial Open judged by David Howard. After a grueling competition with 248 in the draw, Pete Comiskey took out first place on Brittany with an aggregate score of 264 points for the three rounds. In second was Stewart Wallace on Bustin Style with 263 points, third Matthew Moffatt on Peptoxena with 175 points, equal fourth and fifth was Lloyd Stranks on Smart Edition and John Maguire on Gloriette with 174 points, sixth Matthew Moffat on She Be A Cat with 173 points, seventh BJ Rea on Wendy with 170 points and equal eighth and ninth Lance Spannagle on Starelle Brandy and Brett Hall on Jezzbodees Outlaw on 169 points.

This was closely succeeded by the Ladies draft judged by Sam Kime with Leanne Comiskey on Rey Two taking out first place, followed by second Rachael Abbott on Pandora, third Coralie Daly on Watch Me, equal fourth and fifth Elizabeth Hill on Etta and Lucy Davison on Moonlit Acres, sixth Hayley Scott on Neirbo, seventh Brooke Howard on Kit, and eighth Kym Cogill on I CD Catt.

Pete Comiskey backed up his open win to secure first place in the Lindsay and Jean Hill memorial Futurity draft on Smooth Sailing. The event was judged by Leanne West, with Tim Borg on Rooster coming in at second. Mac Shann took out third and fourth place on Hazel's Gift and One Delta Foxtrot, fifth place went to Trevor Paton on Patons Duchess, and sixth went to local competitor Stewart Wallace on Cat Sox.

Pete Comiskey on Roy also took out first place in The Errol Drake Memorial Novice on Saturday, winning the ultimate trifecta. Equaling second and third was Bo Hatfield on Rosgay Hillbilly and Peter Black on Outa Time. Brett Hall on Katie Acres crept in at fourth, closely followed by Jodie Humble on Spin and Rock at fifth and Clayton Comiskey and Phoenix in sixth.

The Maiden A was won by Joanna Anderson on Lee Burn Composer, with Danny Cogill on TE Amo Rey and Dale Pini on Cindy equaling second and third. Berry Shann on Nibbereena Sugar Ray came in at fourth, Bryony Puddicombe on Seligance was fifth and sixth Josh Scott on Contagious.

Leanne Comiskey secured her second win for the weekend in the Maiden B on Rosamoore. Just one point shy of the lead was Samantha Connolly on Amaroo Superb who came in at second. In equal third, fourth and fifth was Leroy Rutherford on Calamity Jane, Leticia Donaldson on Creswood Chevy and Lucy Davison on Moonlit Acres with sixth place going to Ian McCartney on Magic.

Leroy Rutherford also took out first place in the Maiden for Maiden.

The Juvenile draft was won by Trader Wanstall on Kitty Catt, while Tayla Scott and Freckles secured first place in the Upper Junior.

There were two rounds of the Mini and Lower Junior drafts over the course of the weekend, with competitors having two shots at getting a spot on the podium.

The Mini draft winner on day one of the competition was Harriet Camm with her pony What a Destiny. Little Koko Black and Annie took out the blue ribbon on day two.

Bella Clark and Norma Jean won the Lower Junior on day one with little Pete Comiskey and Areba So Smart snatching up first on the second day.

Wrapping up the final day of competition on Sunday afternoon was the Novice B, with spectators watching closely as Clermont competitor Amie Shann battled it out in a run off with Robert Daly after receiving equal scores following the first two rounds.

Amie Shann and Beyonce came out on top to secure the blue ribbon and also break her maiden rider status. Following Robert in the line up was local competitor Alistair Davison and his faithful gelding Sheriff in third. Will Edwards on Alpha Century came in at fourth, and equal fifth and sixth went to Joanna Anderson on Lee Burn Composer and Led Hopkins on Playing Two Up.

The committee was grateful for the continued support from all the sponsors and volunteers over the weekend, and to the Speed family from Croydon Station, Hamblin family at Orana and May Downs, Anderson family at Pomegranate Creek and Wallace Cattle Co for providing the cattle for the weekend.