Brisbane's Sophie Matterson has gone from a film and television career to an epic camel adventure that is taking her across Australia on foot.

Chasing camels spooked by a cow, and hearing the sound of a bull camel coming up to her camp in the middle of the night - these are just some of the adventures that Sophie Matterson has chalked up to date in her epic walk across Australia.

They're experiences most of us don't even contemplate putting on our bucket list of life, but the 32-year-old says she is all the richer for her two years of slow travel with five camels as her only company.

Taking a day at Lindsay and Carol Godfrey's Cunnamulla property to do her washing and let her animals graze, Sophie says her 5000km coast-to-coast trek from Australia's western-most point, Shark Bay in Western Australia, to the eastern-most point at Byron Bay, NSW has been anything but boring.

"I have music and podcasts but I make an effort not to listen to them," she said. "We don't spend enough time alone with our thoughts."

Apart from that, making and breaking camp, tending to her five travel companions, and planning the journey ahead gives her virtually zero time to herself.

"People ask if I talk to my camels - it would be weird not to, I think. They're big personalities." The camels are a constant companion in every sense.

The five of them - Delilah, Jude, Clayton, Charlie and Mac - originally came from the APY Lands and were 100 per cent wild when purchased for the journey.

Breaking them in and making their saddles was all part of the journey for Sophie, whose great-grandfather Frank Cave served with the Light Horse in Palestine and who would have seen camels used in World War I fighting there.

"Camel equipment isn't easy to come by," she said. "I also made the saddles because I wanted to know how it's done, and you treat things better when you know how many hours you've put in."

Sophie, who grew up at Samford on Brisbane's western outskirts, was a Brisbane Girls Grammar School student before studying film, television and photography and working in various locations around Australia until she decided she wanted to do something different.

"Dad read in the Queensland Country Life that people were milking camels," she explained. "It's a bit of an unusual transition, but I loved it so much, it started to take over."

Camel trekking work in the Flinders Ranges and at Uluru were next, and that's where the idea of walking across Australia was conceived.

"The camels really interested me - we have a huge history with them, but it was also their physiology and how they've adapted to the landscape."

With the help of her former boss she procured five camels that would otherwise have been destined for Peterborough.

"I tell them when they're naughty, they could have been camel burgers," she laughs.

It was when the camels were newly broken in and fresh that they took fright at a cow and galloped off in WA, with all Sophie's water, her satellite phone and her EPIRB packed on their backs.

"All I had was a pocket knife," she said. "I ran probably 3km after them."

When the journey started on April 1, 2020, Sophie thought it would take her nine months to complete the trek but with much of WA in drought she found it hard to make the kilometres originally estimated.

"I had to go slower so the camels could get enough to eat, and then there was no way to get all the way through before it got hot again," she said.

"I decided to split the trip in two, which I was devastated about at the time, but it was the best decision.

"It's about the journey, not the destination, and when I saw the camels again, they had big, healthy humps and were ready to go." 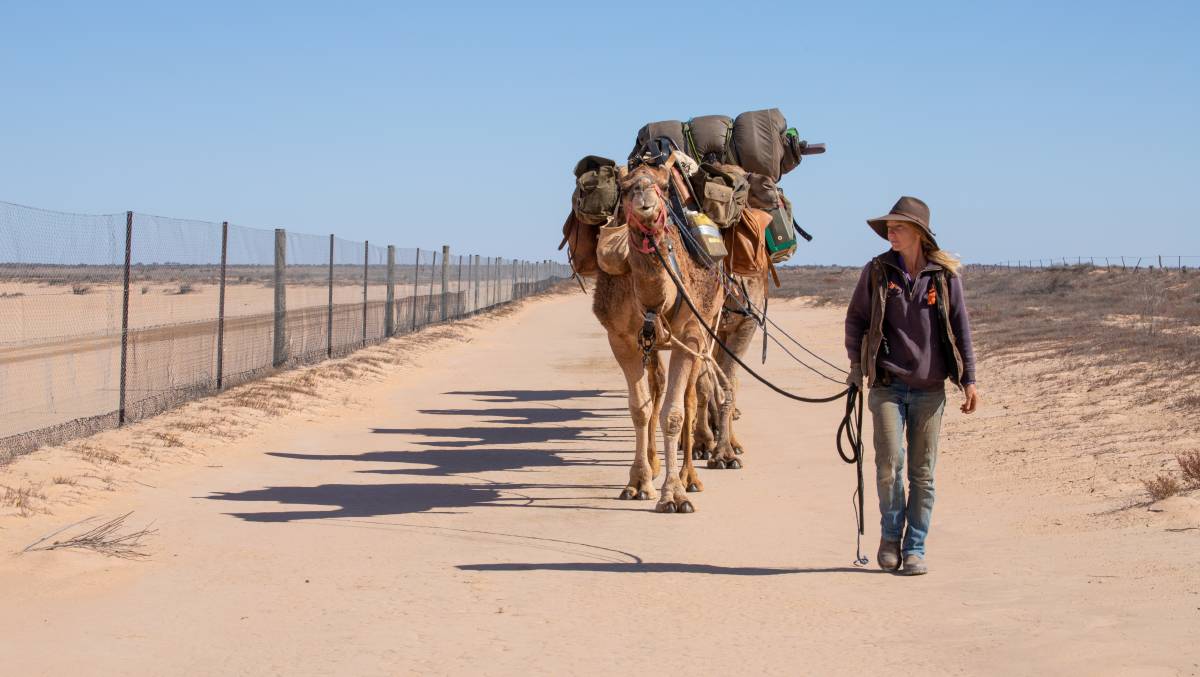 Part of the trip was along the wild dog barrier fence.

After finishing stage one at Coober Pedy, she trucked the camels to Beltana Station in South Australia, and the season has been good everywhere she's walked since starting again on May 1.

From Cunnamulla she's planning to travel to Hebel and says her route after that will be dependent on her ability to cross the border into NSW.

"The pandemic's affecting me for the first time, I've skimmed across the top of all that," she said.

From Hebel she anticipates using station roads and stock routes to make her way to Goondiwindi before crossing the border at Tenterfield.

After that, Sophie says her next adventure might be to settle for a bit in one spot.

"What I'd say to people is, we're all very capable - this is nothing to be scared of.

"If you have the opportunity, get out and have a big adventure."