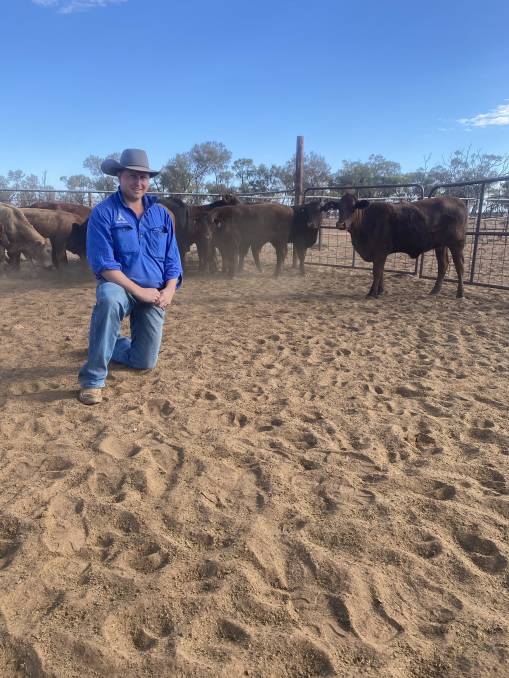 Queensland livestock agents have featured heavily in the AuctionsPlus sheep and cattle throughput tallies in recent weeks, as 'buoyant' markets see large numbers on the move.

Quilpie-based livestock agent Sam Bartlett of Adcock Partners was second in the cattle throughput rankings that week, and puts that down to confidence in the market.

"I really haven't seen the cattle market this buoyant, or such confidence in all rural commodities. It is a great time to be in the industry," Mr Bartlett said.

"It is certainly putting confidence into the market place as my clients are mainly breeders and market their cattle from turning off either as weaners, or to taking them through to Jap-Ox depending on their country."

He described the heifers as having all the genetics and were medium to large frame in store to forward store condition weighing 312 kilograms. They sold for $1320/head average.

"That is really good money and they were highly sought after going into central Queensland and northern NSW," he said.

Mr Bartlett said while his area was predominately south west Queensland, he does cover a pretty vast area at times as there are clients based over a wide area of Queensland and the NT.

He is armed with a lot of experience in the rural industry having worked for Consolidated Pastoral Company and S Kidman and Company, then managing the Quilpie spelling yards before becoming an agent.

He said the recent bull sale results are certainly reflective of a strong commercial cattle market.

"We were certainly very lucky to secure some paddock bulls privately for clients earlier this year which will ease some costs for them, and as well we certainly stoked up on replacement bulls for our clients last bull selling season," he said.

Along with assessing cattle on AuctionsPlus, Mr Bartlett will assess and sell some 18,000 sheep mainly sourced out of the Cunnamulla and Quilpie districts through that selling system this year.

"Most of these sheep are woolgrowing Merinos, but we are definitely getting to see more meat sheep creeping into our corner of the state."

He said the seasonal conditions in the south west were still pretty good.

"There is still plenty of grass available to put weight into livestock, and we will see some heavier cattle turned off from this area later in the year," he said.

"Demand is certainly outstripping the supply, and we've never enjoyed so much interest," Mr Adcock said.

"We have producers willing to borrow a lot of money to buy quality country. Also, we have investment funds competing and looking to invest in properties such as Packhorse Pastoral Company."

Packhorse Pastoral settled on the large scale Roma property Stuarts Creek for a figure believed to be $30 million, which included 2000 quality mixed Hereford cattle in July. Stuarts Creek, a family operation, had been in the same family for the past 75 years and was not publicly listed for sale.

Packhorse Pastoral brings together some big players and is looking to invest $160 million in potential acquisitions stretching from Coonamble in NSW to Taroom in Queensland.