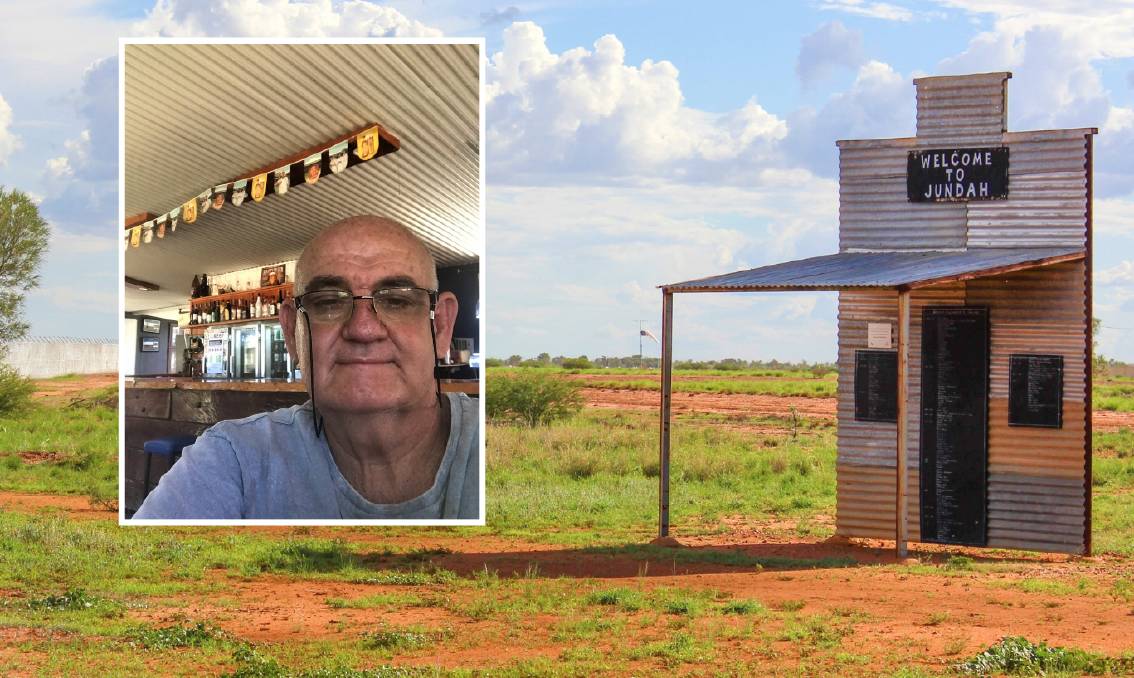 No isolation: Jundah publican Warren Hansen (inset) is serving 60 to 70 patrons a day in tourist season and says vaccination is his reassurance. Main photo: Jaymee Matheson.

Common sense is what Jundah's publican Warren Hansen says has given his small town the distinction of being the most highly vaccinated in Queensland's central west and probably the state.

Common sense is what Jundah's publican Warren Hansen says has given his small town the distinction of being the most highly vaccinated in Queensland's central west and probably the state.

According to Central West Hospital and Health Service data, 70 per cent of the 67 people living there are fully vaccinated and 83 per cent have received at least one dose, via RFDS outreach services.

Some 54.3 per cent of all eligible residents in the central west are now fully vaccinated with both first and second doses of either AstraZeneca or Pfizer, and more than 10,000 doses in all have been delivered across the vast region.

Whereas once pub patrons would have discussed the weather or the price of cattle, Mr Hansen said the pandemic gripping the world and getting the jab had become the main topic of conversation.

"The general consensus is that most are happy to be vaccinated," he said. "Living in small communities, we feel vulnerable with so many tourists passing through, and vaccination is the best way to protect yourself."

According to the Barcoo Banter July newsletter, Jundah's Visitor Information Centre recorded 374 visitors for July while Stonehenge welcomed 711 and Windorah a total of 921.

While there's a health clinic in Jundah, the nearest hospital with a doctor is at Longreach two-and-a-half hours away.

"Help's not immediate so we've got to take what precautions we can," Mr Hansen said.

As far as he was aware, most of the community had AstraZeneca shots because that's what was offered in the early phase before health advice changed.

"We even had 18-year-olds lining up for it before they changed the ages - we all had our first one and no-one fell over with a clot so we kept going," he said. "There's one thing with people out here, they've got common sense."

CWHHS medical services executive director David Walker said vaccination rates in the region had been tracking very well compared to statewide and national rates, and were continuing to build as communities realised the COVID-19 virus wasn't something that was happening far away.

"With the Delta variant, the risks of widespread transmission are very real and our relative isolation here in the outback is no protection."

He said 890 people had turned out to be vaccinated at AstraZeneca and Pfizer clinics at Longreach last week, and said the excellent turn-out showed central west residents were recognising that a very high level of community vaccination was the only way back to some degree of normality in their lives.

In the largest town in the region, Longreach, 66pc of the eligible population was fully vaccinated and 79pc had had at least one dose of vaccine.

"Alpha is also doing well, with 67pc of the eligible population fully vaccinated and 79pc having received at least one dose," Mr Walker said.

Update: By Tuesday evening, Alpha was reported as pipping Jundah at the post for title of most vaccinated central west community with 71pc fully vaccinated and 79pc having had at least one dose.