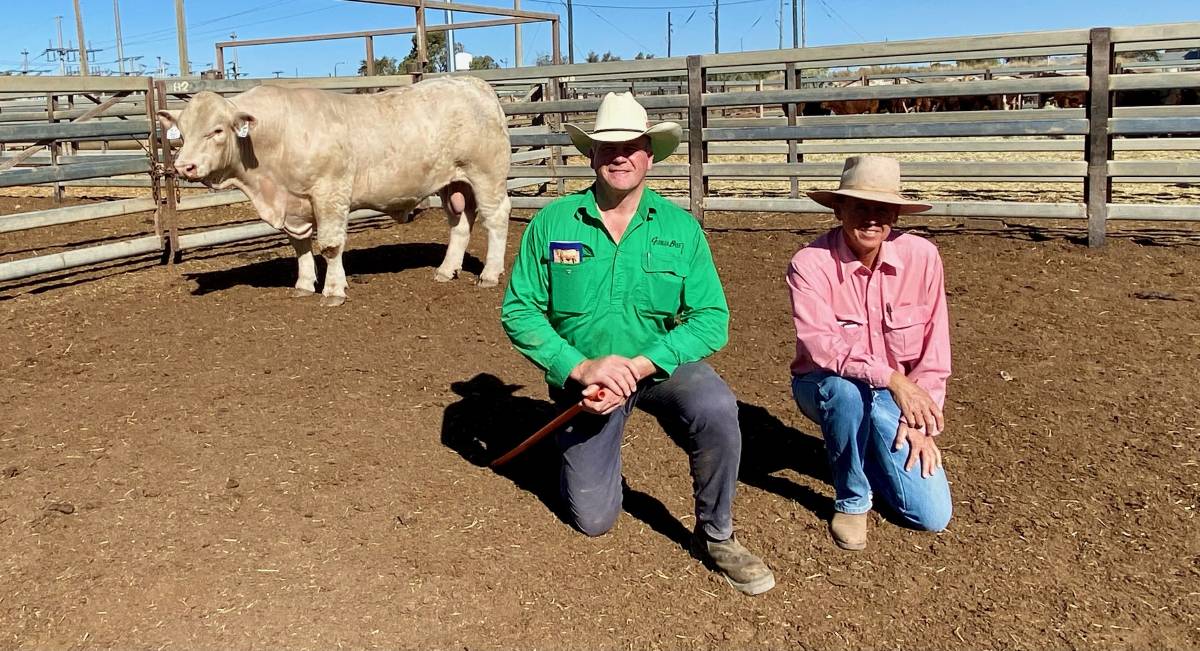 The second annual Fairfield Charolais bull sale at Winton was on fire from the start and resulted in 39 bulls selling to average $9705, while three composite bulls averaged $9666.

The second annual Fairfield Charolais bull sale at Winton was on fire from the start and resulted in 39 bulls selling to average $9705, while three composite bulls averaged $9666.

"The sale was an outstanding success and well supported with buyers from Prairie to Julia Creek and south to Blackall," Mr Binny said.

"Feedback from our buyers was they were a great line-up of bulls with growth and finishing ability, with great temperament."

The sale topper at $16,500 was Taylor/Glenlea Quickdraw (P), sold to repeat buyers David and Gayle East, Breedon, Longreach. By Fairfield Lone Ranger, a polled bull Mr Binny purchased from the Hindles in 2017, he was from a Douglasdale Viagra daughter. He entered the sale ring at 910 kilograms and had a 144 square centimetre eye muscle area and fat scans of 10mm and 6mm.

Next at $15,000 was the red factor polled sire prospect Glenlea Howler (P), a son of Paringa Howler from a Mixhill-bred female who sold to new client Maranda Pastoral Company, Blackall, for $15,000. At 26 months of age, Glenlea Howler weighed 824kg and has an EMA of 142sq cm and fat scans of 9mm and 5mm.

Lindsay and Belinda Hindle sold bulls to a top of $14,000, twice. First to sell at the money was the red factor double polled Fairfield Quigley bought by Ben Avery, Allandale, Blackall.

Next was Fairfield Quinella, another red factor polled bull by Elridge Lord, and he was bought by the O'Dell family, Colorado, Jericho. Aged 20 months, Quinella weighed 701kg and had an EMA of 136sq cm.

Sponsored by
Shrinking global wheat production is expected to see robust export demand for Australian wheat.
Test
Balonne Shire Mayor Samantha O'Toole has welcomed news that the Department of Agriculture has approved on-farm quarantine arrangements at St George for 34 seasonal workers from Tonga.
Test
Sixteen Central Queensland based Brangus breeder offered an impressive line-up of 102 bulls and females at this year's annual sale on Friday.
Test
The 17th on-property Bellevue Dorper and White Dorper sale offered 118 rams.
Test
The Condamine properties Retreat and North Combarngo will be auctioned in Brisbane on November 5.
Test
The expansion of the Bonnydale black Simmental stud into Queensland is proving to be a fruitful one for Western Australia's Introvigne Grazing Co, with a top price more than double last year's inaugural showing, at Friday's sale at Roma.
Test
Check out who was spotted at this year's Central Brangus Classic sale in Gracemere on Friday.
Test
The state government says it will continue to support cattle producers in protecting their herds from the disease, as WA transitioned into new arrangements.
Test