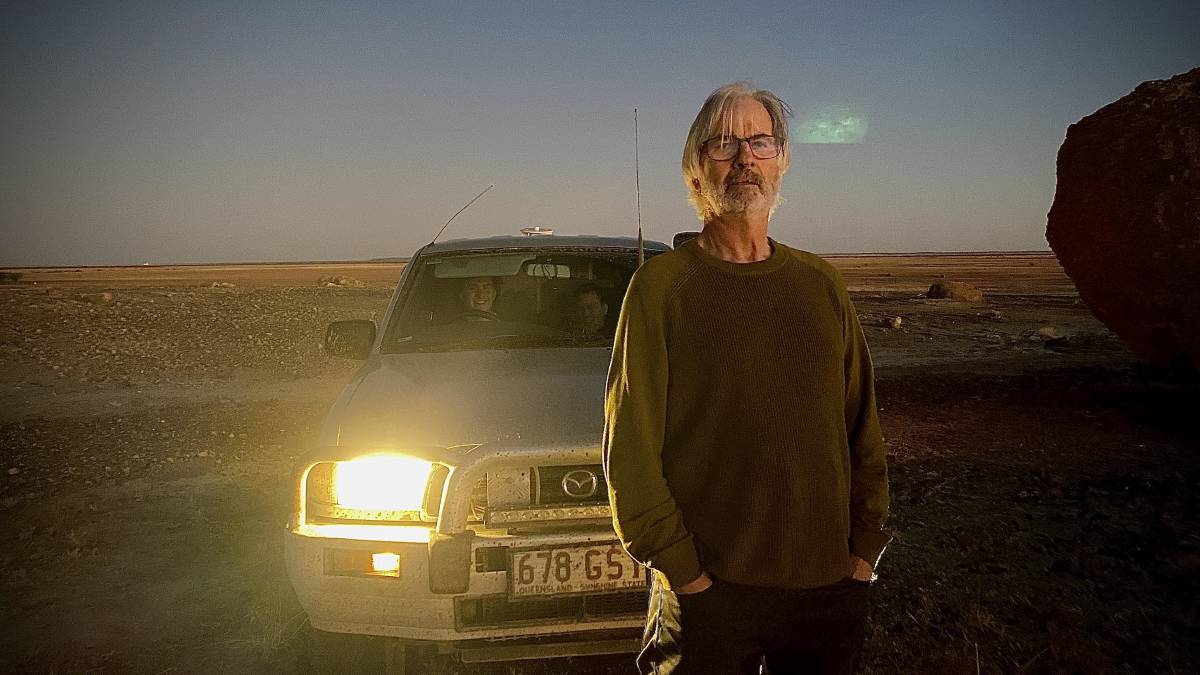 John Jarratt manages to recreate his creepy Mick Taylor persona on the outskirts of Winton during the Vision Splendid Outback Film Festival, with the help of some car lights at dusk. Photo - John Elliott.

When someone as terrifying as murderous outback psychopath Mick Taylor grabs you by the throat and makes demands, most people are quick to agree to them.

When someone as terrifying as murderous outback psychopath Mick Taylor grabs you by the throat and makes demands, most people are quick to agree to them.

It was a scene on the streets of Winton last week, created in jest between actor John Jarratt and Vision Splendid Outback Film Festival artistic director Greg Dolgopolov to announce Jarratt, who plays Mick Taylor in two instalments of Wolf Creek, as the new face of the festival.

The veteran screen actor and producer has accepted an invitation to become the event's new patron, and was in the western Queensland town dubbed Hollywood of the Outback scouting locations for a possible new film project.

Mr Dolgopolov said the announcement was something of a western Queensland homecoming for Jarratt, who spent his teenage years living in Aramac.

Jarratt confirmed that it was while he was attending the Longreach State High School that he first got bitten by the acting bug.

"I put together a sketch comedy show and gave myself all the good lines, " he said. "The headmaster Bob Spirit was delighted I could do something apart from distracting kids in class and suggested I ought to think about giving acting a go."

After finishing school in Townsville he successfully auditioned for a place at the prestigious National Institute of Dramatic Art by performing a scene from a Shakespearean play and reciting the poem 'The Sentimental Bloke'.

He graduated in 1973 and has gone on to appear in scores of Australian film and TV roles, from Picnic At Hanging Rock and We Of The Never Never to The Odd Angry Shot to Blue Heelers, McLeods Daughters, and Better Homes & Gardens.

He's arguably best known for the his portrayal of sadistic serial killer Mick Taylor in two instalments of Wolf Creek, a role that led to a cameo appearance alongside Quentin Tarentino in his global box-office smash hit Django Unchained.

Mr Dolgopolov said Jarratt was as much a western Queensland local as the film festival was ever likely to get.

"Yes, he portrayed Mick Taylor but he was also in McLeod's Daughters," he said. "You've got to remember, he was on Playschool before he 'turned evil'."

He described the successor to Roy Billing as festival patron as one of the most recognisable in Australian film and television, saying he was very down to earth.

His 2011 drama feature film 'Savages Crossing' was on the packed program, all of which Mr Dolgopolov said had been received very favourably.

Despite Sydney's COVID-induced lockdown, there was a bigger audience attendance than last year, when the film festival was the only event taking place in the outback.

Although only nine months since the last festival was staged, Mr Dolgopolov said a combination of regular patrons, a good selection of films, and lots of visitors on the road had all contributed to this year's success.

"The town was absolutely full - getting a quick coffee was impossible, which is not a bad problem to have," he said. "We didn't need to wear masks, we could talk to each other, we could go to the cinema."

The lockdown impacted festival headliners more than the general public, including Sydney-based Italian musician Mauro Colombis, who is internationally renowned for his silent film piano accompaniment.

"We brought the national treasure Ron West out of his retirement, and his two-and-a-half hours of playing, one of them for a movie he wasn't familiar with, was just remarkable," Mr Dolgopolov said. "He's well known to Sunshine Coast silent film devotees, who were delighted to see him again."

The 2021 Vision Splendid Outback Film Festival wrapped up on the weekend with the Telstra Short Film Competition, which included several films shot and edited in Winton by around 70 students over the previous fortnight.

The 2022 festival is set down for June 22-July 2 and John Jarratt said he was hoping to see as many film buffs as possible next year.