Great week: Droughtmaster directors Will Haviland and Ken McKenzie sharing a laugh with president Todd Heyman in the Droughtmaster marquee.

The Droughtmaster breeds' Beef success is just one topic covered in the 2021 Naturally Droughtmasters special publication, which can be read in full by clicking on the link within this story.

"Planning commenced 18 months out from the event and internally a Beef committee was formed and led by directors Ken McKenzie and Will Haviland with Marketing and Events executive Ali Bull. This culminated in Droughtmaster breeders comprising the largest exhibition of stud cattle at Beef this year, with close to 220 head on-site," he said.

These great numbers led to the Droughtmaster marquee becoming a great hub for society members to unite and mingle, have a coffee or lunch and take in the atmosphere at Beef. 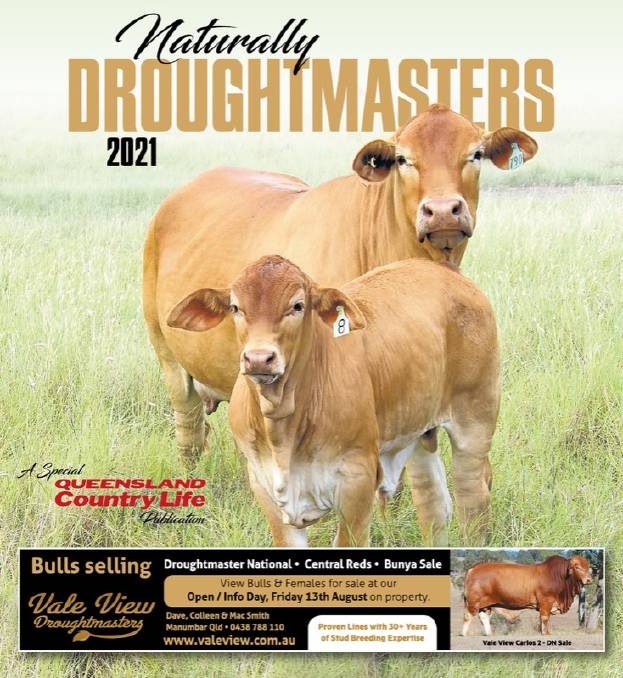 Click on the image above to read the 2021 Naturally Droughtmasters special publication in its entirety.

"The marquee was a flurry of activity, with a plethora of enquiries fielded from visitors wanting to know more about all facets of the breed. Functions where held each night at the marquee, including a meet and greet, The Beef Genetic Focus Sale, a panel session (including the Hon David Littleproud, Duaringa feedlot manager Sarah Donovan, AGBU principal scientist David Johnston and QLEA president Greg Pankhurst, while the breeds Beef trophies and awards were also presented."

Mr Heyman said the Beef Genetics Focus Sale was a cracker, with 20 lots been offered up on the Wednesday evening.

"This event created a real buzz and the marquee was crowded with people. The top priced heifer came from Rondel Droughtmasters selling for $28,000. The results from this sale furthered the reputation of Droughtmaster females as the best mothers in the Australian beef industry.

"In a lovely show of support, Yaralla Droughmasters donated a steer to raise funds for the Royal Flying Doctor Service, with the steer being purchased for $3250 by GDL."

Outside of the marquee, Mr Heyman said it'd been wonderful to see Needmor Cattle Co recognised as the joint Most Successful Exhibitor in the Commercial Cattle Competition and Clonlara Droughtmasters, taking out the Reserve Champion Pen of Grain Fed Steers in the same event.

"Across the board, Droughtmaster cattle demonstrated their commercial relevance to multiple markets by taking out key categories in the grass fed, grain fed, steer and heifer categories."

He said the Droughtmaster stud judging section was very well attended by members and the competition was fierce.

"Members are to be congratulated on the presentation of their animals."

The cards also came up at aces at the Rocky Sports Club where the Droughtmaster team participated in the annual tug of war competition.

"It was great to see our members prevail against the Brangus team to take out the title this year."

One of the many initiatives attached to Beef was the Droughtmaster Research and Education Foundation Bursary project, which allowed two youths an opportunity to visit Beef, assist in the presentation of stud cattle and attend events or tours of interest. A total of $12,000 was also raised for the foundation in the Straws for a Cause auction.

"This initiative was a great success, and further highlighted the importance of new, young membership and youth to our breed.

"Whenever we looked around at the Droughtmaster footprint at Beef, kids of Droughtmaster families, our Next Gen Committee (and their "trucker caps"), or other youth seemed to be everywhere on the grounds."

Mr Heyman said since the dust settled on Beef, Droughtmaster Australia has had its sights set firmly on the next major events on the calendar.

"We've now turned our focus to showcasing the breed at The Ekka in Brisbane and AgQuip in Gunnedah."