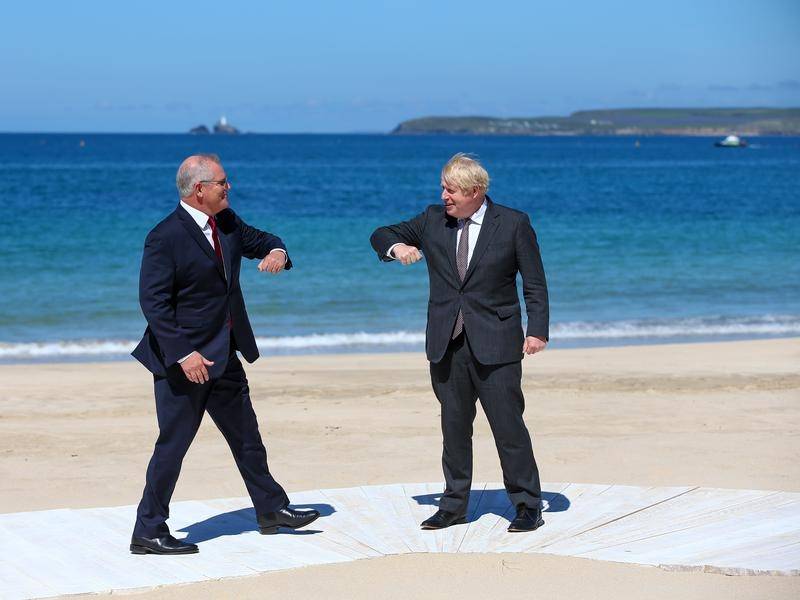 Prime Minister Scott Morrison is heading for trade talks with UK Prime Minister Boris Johnson in London after a three-day summit of leaders from some of the world's wealthiest countries wrapped up in the coastal resort of Carbis Bay.

The G7 leaders' final communique on Sunday included a vow to boost access to coronavirus vaccines across the world and an agreement to challenge China's "non-market" economic practices and call on the country to respect human rights.

The G7 group - the United Kingdom, United States, Canada, France, Germany, Italy and Japan - had invited the leaders of Australia, South Korea, South Africa and India to take part this year in a collective that Mr Johnson termed the "democratic 11".

Mr Morrison had announced after arriving in the UK on Friday that Australia would provide 20 million vaccine doses - a mix of Oxford-AstraZeneca, Pfizer-BioNTech and Moderna - to countries in Southeast Asia and the Pacific.

The prime minister took part in sessions on health, open societies and climate change during the summit and held one-on-one meetings with fellow attendees including the leaders of South Korea, Japan and Germany.

He also had a trilateral sit-down with Mr Johnson and US President Joe Biden.

The trio issued a joint statement saying they agreed "the strategic context in the Indo-Pacific was changing and that there was a strong rationale for deepening co-operation between the three governments".

Trade Minister Dan Tehan said on Sunday that enormous progress had been made on an Australia-UK free trade agreement in the past six weeks but it was unclear if a deal could be finalised while Mr Morrison was in the UK.

"We will continue discussions over the next 24, 48 hours in the hope of reaching an agreement," Mr Tehan told Sky News' Sunday Agenda program.

"But we have said all along that we want this to be an agreement of substance, we want to make sure it is in Australia's national interest and if we need to be patient we will be patient."

He said there is still a number of issues that need to be worked through - on agriculture, services and investment - and Australia wants to make sure that the agreement in principle document has everything in it.

Mr Tehan still hopes to be in position to sign an in-principal agreement in the next couple of days.

"But if we need more time, we will take more time," he said.