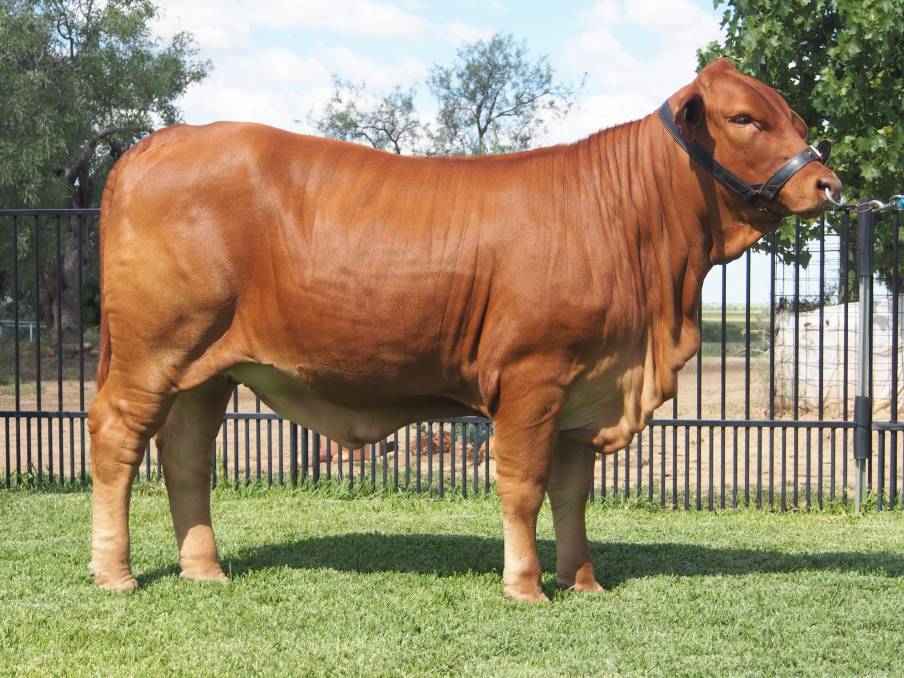 With a wide variety of Droughtmaster genetics on show at Beef Australia last week, there was no better time than to offer a sample of those genetics at auction.

The Droughtmaster Genetics Focus sale last Wednesday night saw 24 lots - including heifers, steers, embryos and semen - sell for an average of $9702 to gross $232,850.

The sale opened with a charity steer donated by the McKenzie family, Yaralla Droughtmasters, selling for $3250 in support of the Royal Flying Doctor Service.

A purebred Droughtmaster steer, HGP treated and grain-fed for 120 days at Duaringa Station Feedlot, it was knocked down to Grant, Daniel & Long. His stablemates, a pen of six steers, were then sold to Teys Australia for $2100 a head.

Bidding in the packed Droughtmaster site then swung into top gear when the line-up of quality heifers went under the hammer.

Purchased by Clint and Leah Schulz, Gympie, the 14-month-old unjoined heifer was by the stud's renowned homebred sire Rondel Preston, with the vendors saying she was a beautiful, feminine, and well-balanced female.

The Schulzes also paid the second-top price of $20,000 to secure Medway Diana 20 (P). Sired by Glenlands Vintage (P) and from Medway Yantanabie (D), the 15-month-old was said to be a donor-quality female.

The Childs family's Glenlands J Charity (PP) also made the second-top money of $20,000, knocked down to the Power Family Trust, Cloncurry.

An 'impressive' Medway Umbercollie (P) daughter, the 19-month-old was four months PTIC to Glenlands Bateman, 'offering a tremendous opportunity to build with'.

Buyers also had the chance to purchase a pick of the entire drop of PTIC yearling Clonlara Droughtmasters heifers. Roger and Jenny Underwood, Eversleigh and Wallace Vale stud, Wallumbilla, paid $18,000 to secure the opportunity.

The Childs family also joined forces with the Droughtmaster Next Gen committee to offer an embryo package for purchase by, for, or on behalf of a person under the age of 25.