For 92 year-old retired cattleman Bruce McKenzie beef production has a been a lifelong passion, which has flowed through the genes to his sons Ken and Andrew. 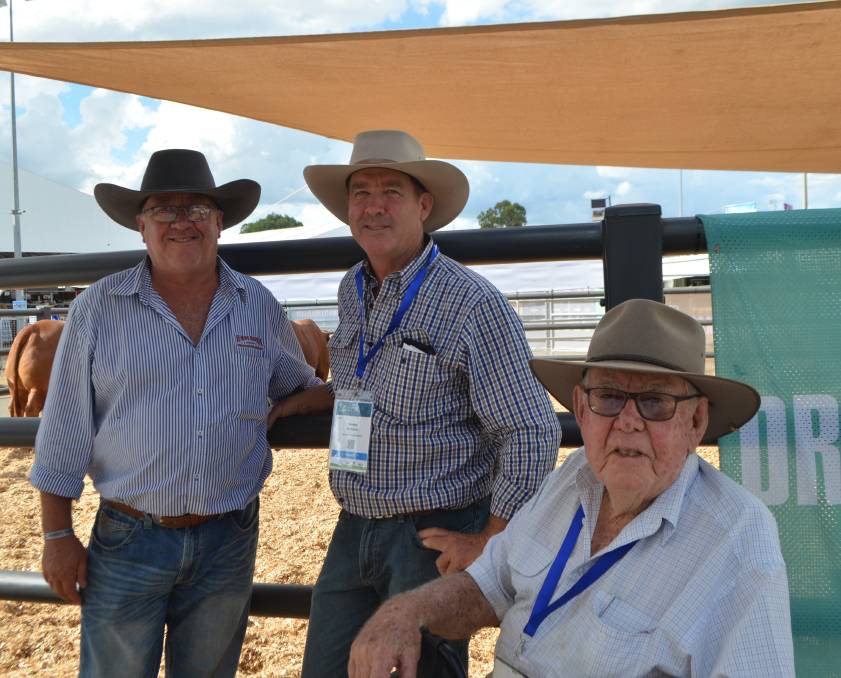 Proud father: Bruce McKenzie (far right) with his sons Andrew and Ken at the Droughtmaster site at Beef after a big day in the stud judging ring.

For 92 year-old retired cattleman Bruce McKenzie attending Beef is all about being able to talk to people he's met and befriended over his years in the industry, and to see good cattle.

"It gets bush people together, and it's good to be able to see what other people are doing across a large variety of breeds," he said.

It was back in the 1950's that Bruce started in the family business straight after he left school with his father Jim and uncle Don on Coolarah and Calioran on the Fitzroy River. When he had enough experience under his belt he moved to nearby Pearl Creek to be the station manager. In 1968 he bought the property from the family, and eventually kept 9712 hectares.

"I started with close to a 3000 head Hereford breeding herd which I joined to Shorthorn bulls every few years," he said.

Hereford bulls were sourced from Balcamba and Calliope owned by the Wilson family, Torsdale, Henry Besch and Playfield.

In 1957 he was mustering and noticed a Brahman bull was in one paddock.

"At the time Brahmans were considered pretty ordinary cattle, so we upped him and chased him over the fence. Next time we mustered about two months later he was back again. When we branded we ended up with about 80 crossbred brindle calves."

These calves were spayed and sent to fatten at 2.5 to three years old, and they turned out well enough that he then got into Brahmans. Bruce bought his first Brahman bulls from Pat Dunn and Bill Davison then later more from Garglen, Yenda, Lancefield, Tartrus and Ron Beak.

"I started crossbreeding Hereford by Brahmans, but I didn't really know what I was trying to do at the time, except that I knew I wanted to breed a good red crossbred herd," he said.

To further this goal, in 1958, he went to see Dave Bassingthwaighte, Wallumbilla, where he bought a Santa Gertrudis Brahman-cross bull for 160 guineas.

"This bull formed the start of our Santa-Brahman cross herd. Soon after this I got talking to Noel Perry (a foundation Droughtmaster breeder), and I was asking him what I should do next and he suggested Droughtmasters," he said.

"In April 1969 I selected 25 red heifers out of the herd and had them classified as D1s. I took these heifers from Pearl Creek to Coolarah, where I joined them with Konjuli August. In May 1969 I purchased another 15 head classified as Appendix A, and in May 1970 I had another 21 heifers classified; these were all joined to Konjuli August as well.

In 1969 Bruce branded and numbered seven calves from these matings, which were the initial part of the Coolarah Stud (Droughtmaster stud number 75).

"Ken took the reins at Cooralah and changed the stud prefix to Yaralla in 1994," Bruce said.

"Ken has never bought a stud female. What he has originates from the Herefords purchased in the 1950's and the crossbred females produced from that point. Andrew did buy in some females to establish his herd as he started his later then Ken."

He said the gradual change from Herefords to Brahmans to Droughtmasters was the biggest move he made in his years in the industry. And the utlisation of preg-testing in the late 1970's was the biggest operational change he made.

"I remember Ken preg-testing a big Hereford cow, and he said 'empty, push gate' and I said 'c'mon she's a bloody good cow'. But it really helped to improve our herd," Bruce said.

Bruce said he's very proud of his daughter Julie who he affectionately calls a "mother hen" and what his two boys have gone on to do with their cattle.

"They took over from me and went forwards not backwards, which is something I see happen with grazing families quite often."

He said he has never been an out-front person.