Almost half of the championship ribbons in the Beef Australia Brahman judging were awarded to Nobbs Cattle Company at Duaringa on Tuesday under judge Ivan Price from Moongool stud at Yuleba.

The team of six head from exhibitor Brett Nobbs were consistent in type and performance with all but one animal claiming a champion or reserve ribbon.

Any betting man could have backed a sure winner that NCC would take the grand champion male ribbon when all three of the calf, junior and senior representatives were from their stable.

"The breed is in great hands when you can line three individuals up like this," Mr Price said before awarding his grand champion male award.

"I've been chasing balanced cattle all day and you can see the three of them out there all have that sire appeal, they have great neck carriage and they balance up every time you move them."

The eventual grand champion, NCC Novak, was the first progeny from the combination of JDH Mr Elmo Manso and Brahrock Miss Martin Marri 5153 (from Royce and Beryl Sommerfield) which is set to only become more prolific with plenty more pregnancies planned.

The two-tooth bull weighed 1000 kilograms with P8 and rib fat depths of 13 and 9 millimetres and a 138 square centimetre eye muscle area.

The bull was completely grey bred but had a ginger colouring coming from Elmo.

Mr Nobbs said he would retain either the calf or senior champion bull because of the consistency and predictability of the cross.

"It's so potent and they are so good in the testicles, in the feet and legs, have good sheath and temperament and really good muscling. They are just so complete; you can't pick any holes in them."

His full brother and sister were the calf champion bull, NCC Navajo, and female, NCC Nova. 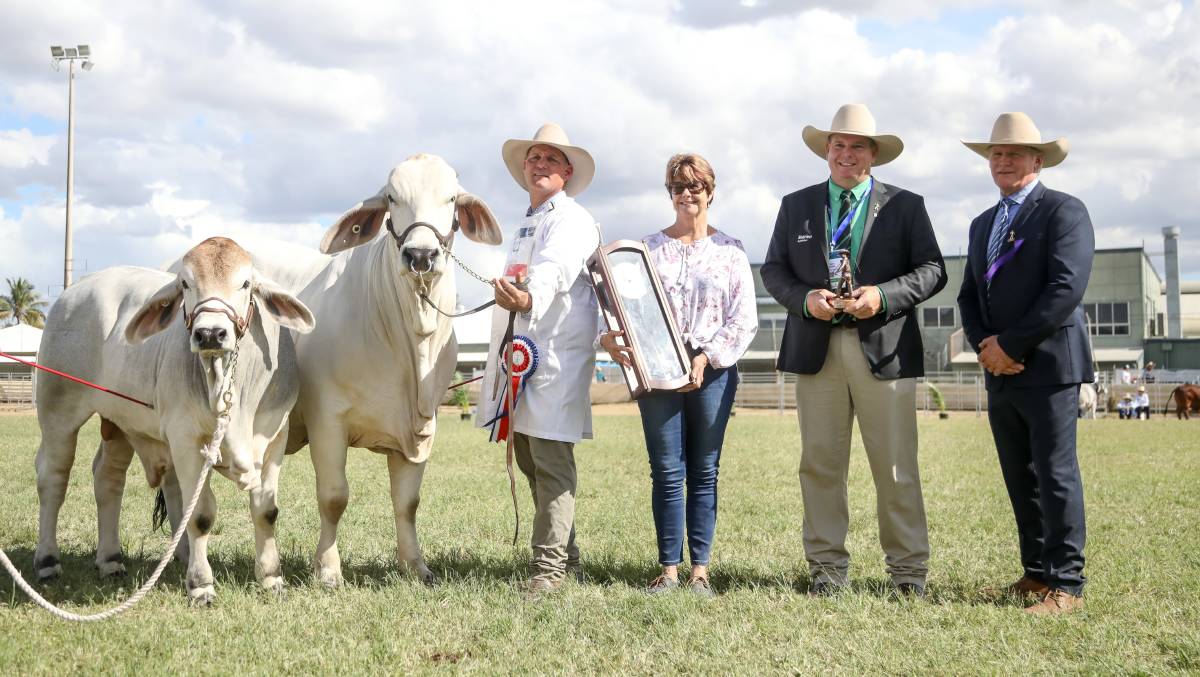 It's been 12 years since Mr Nobbs first sold Elmo progeny in Australia and the leading sire continued to be producing top stock.

"He is evergreen," Mr Nobbs said.

"I may never see a bull like that in my lifetime again; he is such a powerhouse.

"There is a lot of good bulls but there are very few exceptional bulls in the world and as far as breeding bulls go what Elmo has done for the Brahman industry worldwide is actually quite phenomenal. "A bull's progeny can appear to be good for a couple of years but...there can be holes that appear over time that you may not see in that first one or two calf crops but he just keeps punching them out.

"He is such a unique bull that you can do anything with him."

Novak first won the 24 months and under 30 months class which Mr Price described as the best group of animals he had judged all day.

A large majority of the Brahman cattle paraded in the Beef Australia ring were grey rather than red.

They included the senior and grand champion female Cambil Monique 5786 and her bull calf exhibited by Lawson Camm and family, Proserpine.

She was a daughter of NCC Marshall out of Cambil Monique 4883 and was commended for her refinement in the front end and the job she was doing on her calf.