The top price was paid for a cow and calf unit bound for a growing Speckle Park stud in Queensland. Photo: Hillview Speckle Park

This year's sale achieved a better clearance rate for a much larger offering.

Last year's sale was held at the peak of COVID-19 restrictions which resulted in the largest online attendance at a beef cattle sale for Elite Livestock Auctions.

The online frenzy hadn't wavered on Saturday with the online platform firing bids before auctioneer Brian Leslie could finish his opening remarks for the 90 registered bidders on site.

Successful purchasers were spread from Atherton in Far North Queensland to southern Victoria with agents reporting more local competition this year too. 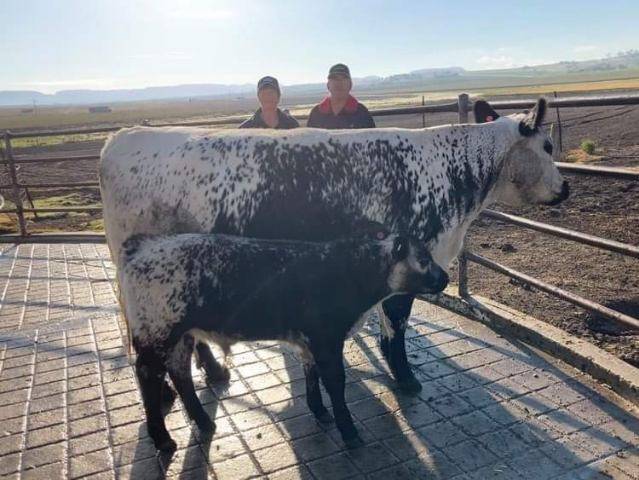 Ian and Trudi Brown with their new purchase. Photo: Supplied

The Bendeich's previous female record was $13,000 and Ms Bendeich said they were stunned.

"We knew she was a quality animal," she said.

"Her dam is still here as part of our flush program. We wanted somebody else to have the opportunity to own part of that line."

Her pedigree packed a punch as a daughter of the $7500 Three Way Guns and Roses and out of the $5500 AAA Little Lady M4, who were both purchased at the Scone sale.

She stood with the first Australian progeny to sell by Canada's Dam Dots Electric DAM 31E, a 103 kilogram bull calf. "His sire was one we looked at in Canada at Agribition in 2019 and we had semen shipped straight to Australia," Ms Bendeich said.

"Layla and her mother were both AI'd to him."

Mr Brown said he already had offers to purchase the bull but both he and his mother would be important parts of their herd.

The dairy farmers currently have about 30 Speckle Park females in their stud and since starting with the breed in 2016 have grown to sell eight to 10 bulls a year out of the paddock.

It was their third purchase from the Hillview stud and they hoped to mate Layla to Canadian sourced semen from Wolf Lake Field Ready.

"We want to keep up with modern, good genetics and be able to keep selling bulls," Mr Brown said.

"About eight years ago I AI'd a couple of cows to Speckle Park and I was so annoyed I didn't get into them years ago.

"For the last 18 months we have been mating our dairy herd (Fresian and Jersey) to Speckles. We can't keep up to the orders for Speckle Park calves. We do get great money for them."

The cow and calf arrived the following day on a small body truck loaded with what Mr Brown calculated was around $100,000 worth of stock heading to buyers in the sunshine state.

The company is no stranger to buying from reputable Speckle Park herds and added the top price two-year-old son of Johner Stock Farm Unmarked 2D out of Battalion Heartbreaker M1.

He was used lightly and came from a proven pedigree with full embryo transfer siblings averaging $37,500. At 17 months he had a 118 square centimetre eye muscle area and 7.1 per cent intramuscular fat.

The commercial outfit consists of about 300 to 400 commercial Brangus breeders and an elite herd of eight Speckle Park stud cows used to breed bulls through IVF programs.

Manager Dallas Coben said they had previously been using Angus bulls but had seen success with Speckle Park bulls in recent years.

"Where we are we need to keep a little bit of Brahman content in the cattle," he said.

"The idea is to use the Speckle commercially to get hybrid viguor and more performance and market suitability for the southern feedlot market.

"We are fairly diversified...we are not targeting any one market.

"The whole operation is vertically integrated; the stud is designed to breed our own bulls, and then we keep the progeny in the commercial business and background them and take them to feeder weight. There is possibly room there or scope to go down the road and market our own beef."

A Canadian stud has already indicated their interest in securing the semen rights to the young sire.

It was the Kneipp family's third year exhibiting at the sale in which they have either topped the bull or female section.

"At 17 months he had some terrific raw data which we are trying to focus on to not only improve our herd but offer to the Speckle Park in Australia," vendor Grant Kneipp said.

"He certainly was well developed in all the areas we like to see and he had a good following from overseas.

"It is great to see the Queensland interest. Once the Queenslanders start to get into the breed and we see them get into those bigger herds and show what they can do on some scale, we will see it more of a common trend."

Read the full report in this week's The Land.