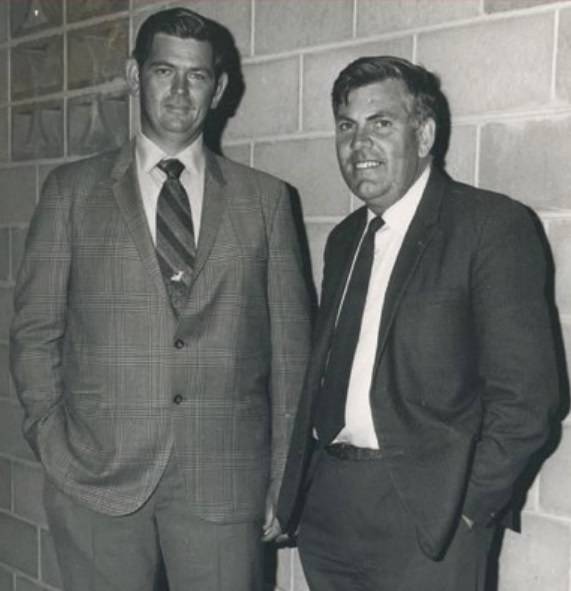 Visionary cattleman Ken Coombe (right), with Bubba Hudgins from JD Hudgins, US, during the opening of Brahman House in Rockhampton in 1981.

Beef 2021 visitors who are looking for existing and emerging businesses with an innovative beef industry focus or an agtech product or service, will find what they are looking for at the Ken Coombe Tech Yards - the new AgTech and Innovation Hub.

Named in honour of the late Ken Coombe, the precinct recognises the contribution of one of the founders and the first chairman of Beef 88 - the inaugural Beef Expo held in Australia's bicentennial year.

His time as chairman continued for the Beef 91 event, before handing over the reigns but remaining on the committee. Over time, Mr Coombe saw the 'one-off' event grow into the Southern Hemisphere's largest and best-known beef industry gathering.

He died in Rockhampton in 2019, aged 87, and having suffered from dementia in the preceding two years, had made one of his last real industry appearances at Beef 15.

An innovative visionary and master cattleman, Mr Coombe is best remembered as the head of bull breeding operations with the AMP Society's Stanbroke Pastoral Co - at that point the world's largest cattle enterprise.

He spent 21 years from 1973 to 1994 as general manager of breeding operations based at Stanbroke's bull breeding headquarters, Waverley Station near St Lawrence, while at the same time he registered his family's highly-successful Roxborough Brahman prefix.

Prior to joining Stanbroke, Mr Coombe worked for about 14 years from 1957 for Fairymead Sugar Co (at that time a large-scale beef producer using land set aside for cane production), running its bull breeding operations based near Bundaberg. Fairymead's Avondale Brahman stud was one of the most successful and well-known Brahman studs in the breed's formative years, attracting large crowds and high prices to its annual on-property bull sales.

On joining Stanbroke in 1973, Mr Coombe played a key role in the transformation of the Barkly Tableland's traditional Shorthorn herds into Bos indicus.

Early in his career, he served as honorary secretary of the fledgling Australian Brahman Breeders' Association from 1960 to 1968, and worked for a year for the breed society in 1972 as field officer. During his period as secretary, ABBA membership grew from 26 to 550 members as the breed's momentum continued to grow across northern Australia.

Mr Coombe also served as ABBA president from 1981 to 1984, during which time Australia hosted its first World Brahman Congress. The success of the 1983 Congress was one of the strong precursors to the establishment of the Beef 88 event and subsequent events in Rockhampton.

Family spokesperson, Brett Coombe said they were all very proud of their late father who laid the foundations of such a great event, and that the Beef Australia committee is honouring his legacy in such a way. "Dad would be humbled by the popularity and growth of what this event has become," Brett said.