Hundreds of thousands of dollars worth of hay destroyed by mice at Coonamble.

No one knows how this will mice plague will end

It's hard to believe a year's worth of drought resilience put away, over a thousand hay bales, worth hundreds of thousands of dollars, destroyed in weeks by mice.

"It's a real kick in the guts," says Rowena Macrae of the event on her family's place, Tyrone, at Coonamble. "It's so very hard to watch."

The CSIRO has declared mice a plague north of Armatree, but they are on the run in many districts from south to north in NSW.

For Rowena's husband Adam Macrae the loss of hundreds of bales of wheaten and straw hay is a real blow as he comes out of three years of hard drought, and when things were really looking up after good rain in the last year.

No matter how much mouse bait they put down, the mice just won't stop. Some locals have taken to making their own chemical mix to kill the mice.

Recent rain has put a stopper on the mice population in the paddock, drowning them in their burrows, but as soon as things dry out the mice run out of the hay stacks back into the paddock.

"I have to deal with them day .. and night (he found mice droppings on his bedsheets the other day)," Adam says. 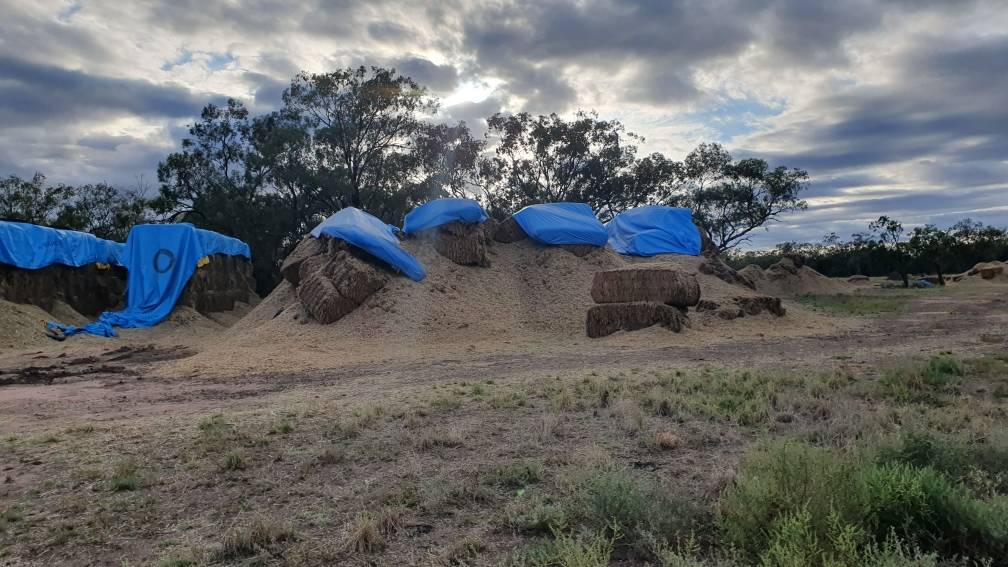 Haystack eaten by mice at Coonamble.

And he can't get any insurance for the lost hay, worth hundreds of thousands of dollars.

He did the smart thing and buried about 1000 bales, double-tarped about a metre underground with phosphene added to kill pests, but he dreads to think if the mice might have got in there as well.

The mice have also destroyed about $7000 worth of feedlot concentrate.

The Macraes harvested 2300 bales of wheaten hay and wheat straw after harvest, thinking this was their bank for their cattle feeding program for the next few years.

"These fodder reserves, this is what keeps us going through the drought, it's a major help in keeping our feed going along. We've done everything we can to make ourselves drought resilient and now this happens. It's disappearing in front of our eyes."

Soon the Macraes will rescue as many bales as they can from the gorged on heaps - they think about 200 - and burn what is left to try and destroy the mice.

Then they face the prospect of wondering what will happen when they go into plant barley and chickpeas this year. They'll have to spend a fortune spraying mouse-off before planting, coming in at about $13 a hectare, without any sureity it will stave off the mice if they move in again.

Sponsored by
Young light weight yearling steers experienced strong support from restockers at Toowoomba.
Test
Nationals MPs will back Scott Morrison taking a 2050 net zero carbon emissions target to the UN climate change summit in Glasgow next week on conditions agreed with the Prime Minister.
Test
Bundaberg's two famous drink-makers are teaming up to release a new beverage.
Test
Following a two year hiatus, CMC Rocks has announced an epic line-up for its 2022 event.
Test
There were 5202 cattle and 5266 sheep from Qld offered online last week.
Test
A Central Queensland grazier is one of first 100 Australian farmers to receive a tank full of water as part of this year's National Water Week.
Test
Thargomindah residents are among those urged to get tested if they show any symptoms that could indicate the presence of COVID-19, following news that two members of a group that had been camping illegally in Queensland's far south west had tested positive to the virus.
Test
As shire and city councillors from around the state gather in Mackay for the 125th Queensland local government conference, their peak body has welcomed news that a parliamentary inquiry would be held into the Office of the Independent Assessor.
Test