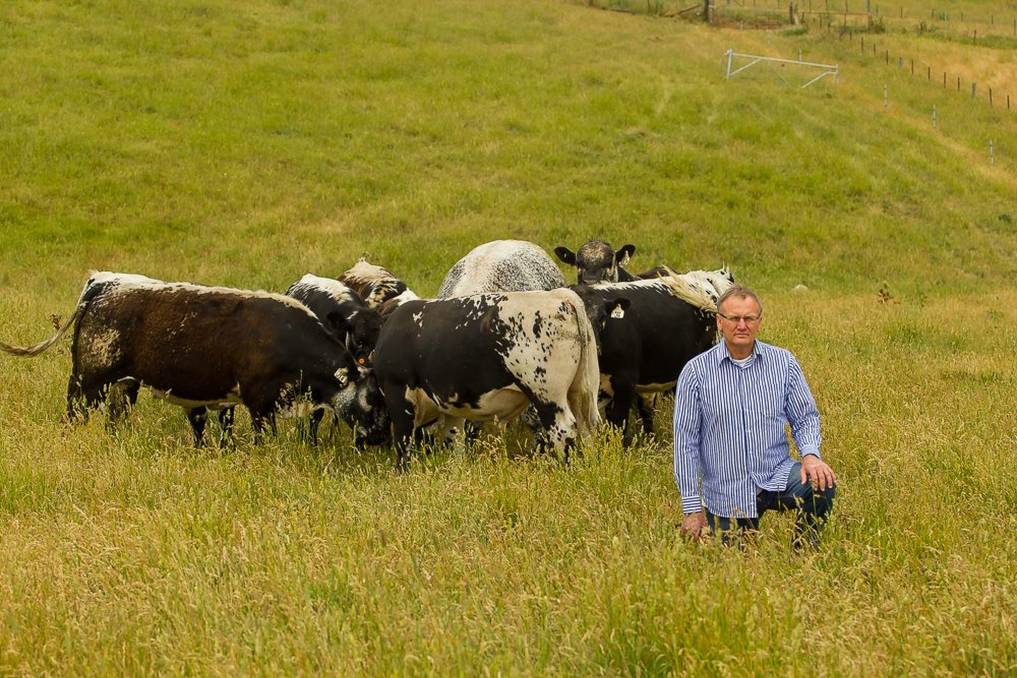 At home: Denis Roberts with a selection of his Speckle Park bulls at Ivyhome in Kingaroy, Queensland, where the Roberts have lived since moving from Oberon, New South Wales, in 2018.

The Roberts' property in Oberon, New South Wales, was in drought when they relocated to Ivyhome, Kingaroy, Queensland, in 2018, and the dry followed them with just 270mm falling in Kingaroy that year, the towns' lowest total on record.

The dry has continued this year with just 69mm falling through mid-March on the 202ha property, which comprises 49ha of black creek flats, and the balance consisting of typical deep red Kingaroy soil.

"Under these harsh conditions you get to see the benefits that good genetics provide. We've gained a much better idea about which of our herd are performing and which aren't as they're all in the same paddock under the same conditions," he said. 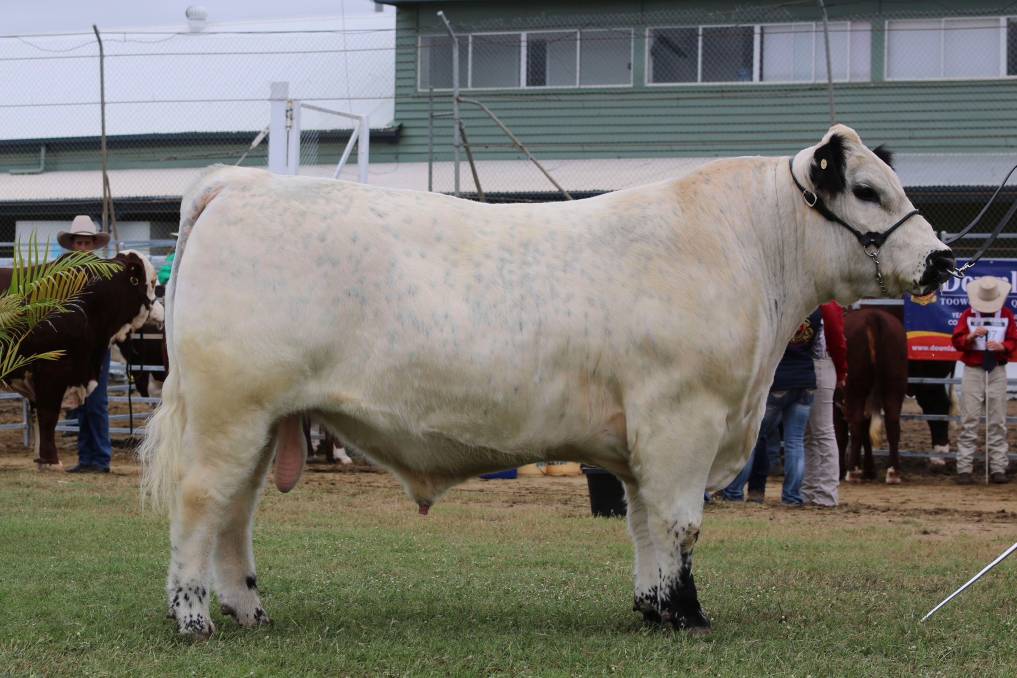 Total package: At Beef 2018, the Roberts won Champion Junior Bull in the Speckle Park section with the then 18 month-old AAA M24."

The Roberts first introduced Speckle Park into their operation in Oberon in 2012.

"I was 55 at the time and starting to think about retirement. With land being expensive it's imperative to get the best possible return on the article we produce, which got me thinking about the stud route.

"I saw the commercial relevance of Speckle Park as a terminal sire, which adds value to all other breeds, especially in Qld, with Brahman and Brahman-cross, where they're a perfect match. The Speckles commercial value lies in the quality of the beef and what it can offer along the supply chain in regards to extra income.

"The meat quality lies between Angus and Wagyu. We can get good marbling on grass or grain within 100 days. The breeds feed efficiency on grass or grain is excellent, and they convert feed into carcase really well."

Mr Roberts said for these reasons, the Speckle Park cross is very popular in the feedlot sector.

"With a crossbred Speckle, lot feeders can achieve the same weight gain in 80 days as they would in 100 days with other breeds. When killed there is a markedly higher yield. For example a pure Brahman will usually yield 50 to 52 per cent, but a Speckle Park x Brahman will reach 56 to 57pc."

He said a good Speckle Park has an IMF score of six or seven.

"This makes the meat, tender and slightly sweet, due to the marbling, making it popular with butchers as well, as customers love the taste." 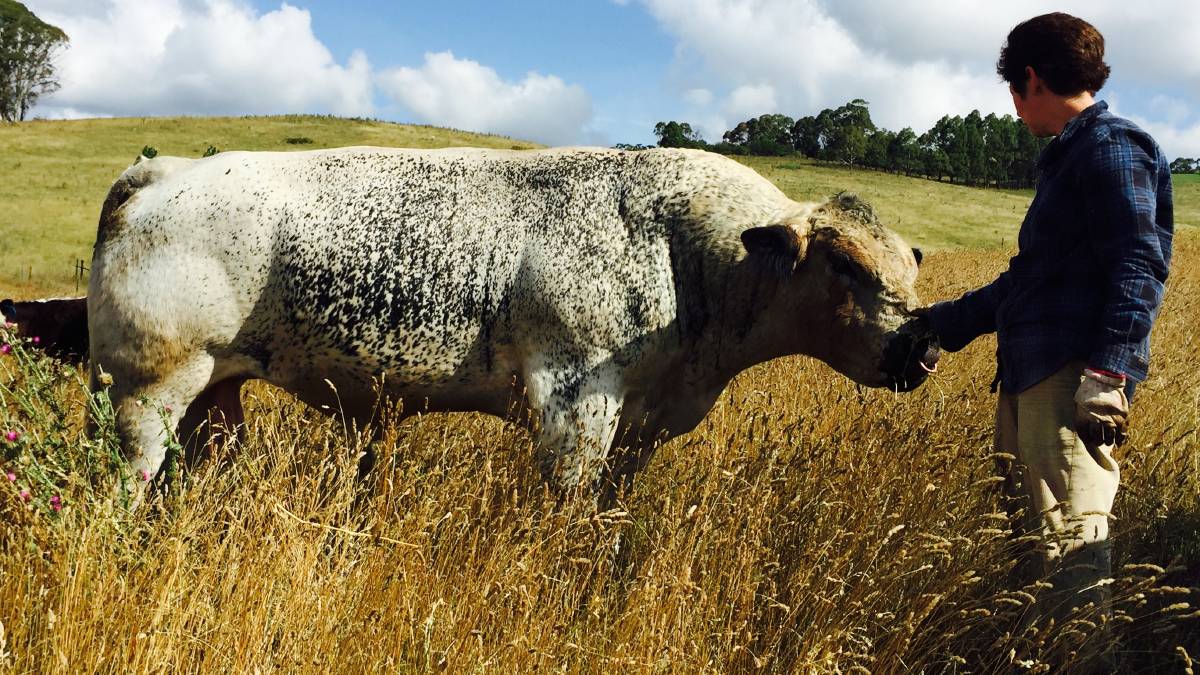 Docile: Theresa Roberts with one of AAA's top performing sires, Iceman. Mr Roberts said his temperament is beautiful, as is evident above.

When first establishing AAA, the Roberts sourced the majority of their genetics from the Humphries family, Wattle Grove Speckle Park, as they lived close by in Oberon.

"Since then we've bought from many studs. I work on using proven genetics, by purchasing semen from bulls that are eight to 10 years old as that way I know what that bulls family can provide for us. For example the Puttnam bulls provide good structure and milking ability.

"I also focus on the female, as every good bull comes out of an equally impressive female. We've really improved our breeding program with strong female lines. We look at where we're falling short in regards to traits such as milk or length then select a bull particularly suited to enhance those traits."

The Roberts are also involved in IVF and ET programs, where they're producing sexed semen and embryos. They're in the midst of setting up these genetics for export under the banner of AAA Global Genetics.

"We'll have a site in the Durack Pavilion at Beef Australia 2021 to provide visitors with more clarity on this program. We're currently sending genetics to New Zealand, the US, and back to Canada. I'll be visiting these countries to expand our business once Covid-19 restrictions are lifted.

"We'll also be taking seven animals to exhibit and enter in the stud competitions. At Beef 2018 we won Champion Junior Bull in the Speckle Park section with the then 18 month-old AAA M24."

He said while ribbons are a nice reward, AAA's focus is squarely on the end customer.

"We have a commercial reality in regards to showing. Our goal is to get into the interbreed competitions, where we're appealing to all breeders. It's a way of promoting who we are and what we're doing with the breed. The best compliment I can get from a judge, regardless of coat colour, is that an animal we're presenting would be of value to a commercial herd of any breed."

Post Beef 2021, the Roberts will be busy selecting bulls, females and genetics for their sale in July, which will feature a large number of sires and dams by AAA M24 and a New Zealand bull, Mainstream Eldorado E11.