Farmland between Highfields and Upper Yarraman now has 158,000 less rabbits, thanks to a program spearheaded by Southern Queensland Landscapes. 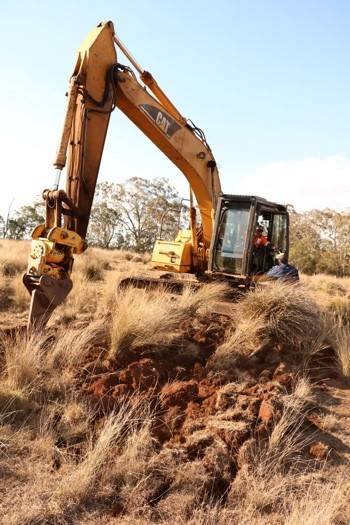 Farmland between Highfields and Upper Yarraman now has 158,000 less rabbits, thanks to a program spearheaded by Southern Queensland Landscapes in conjunction with the Darling Downs Moreton Rabbit Board, the Toowoomba Regional Council, and Biosecurity Queensland.

Thanks to the compounding effect of the removal of those numbers from the breeding cycle, organisers say the overall population impact is likely to be around a million less rabbits eating grass in the region.

SQ Landscapes project officer and feral pest expert Lachlan Marshall said they had been able to remove 676 breeding warrens, thanks to funding provided by the Queensland Feral Pest Initiative.

"Collectively those warrens were conservatively capable of producing 4400 offspring per month; so, this program has been running for three years and if you do the maths that's about 158,000 rabbits," he said.

"But when you factor in those rabbits can start breeding at four months of age, the compounding population impact is around a million rabbits effectively removed from the breeding cycle; and that result has significant implications to the sustainability of farmlands affected."

Geham grazier Peter Patzwald was among those to sing the project's praises, saying it had made a big difference to his operation, especially as it had been so dry over the past couple of years.

"When it is dry the rabbits are eating something that a cow could be eating instead, so we were very keen to work with the project coordinators and get rid of the rabbits we had in burrows spread over a couple acres," he said.

"It's been great; we've been able to get rid of the rabbits and it's been a real opportunity for us to get some education on a pest that we just didn't grow up dealing with; we didn't have the knowledge to know how to get rid of them."

He said he was amazed at just how easy it was to get rid of them once he'd been shown, and said he would gladly join similar projects in future, given the results achieved.

Crows Nest grazier Mark McLean had between 40 and 50 burrows removed from his property and said warren ripping was far more effective as a pest management tool than trapping, fumigating, poisoning and shooting, all of which he'd tried.

"I learnt a very valuable lesson there," he said.

Mr McLean said while it was hard to put a price on how much grass rabbits were consuming, he was sure it was a fair percentage.

"And they'd normally go for the sweetest, greenest grass, which is good for the cattle too. And if you put improved pastures in, well they'd make a fair dent in that as well," he said.

"I didn't believe it when Lachlan was telling me at the start of the project that deep ripping their burrows would work; but upsetting their life cycle and destroying their homes has had a huge impact."

He recommended that anyone with rabbits talk to Lachlan and the team at SQ Landscapes about ripping and how they could greatly reduce their populations.