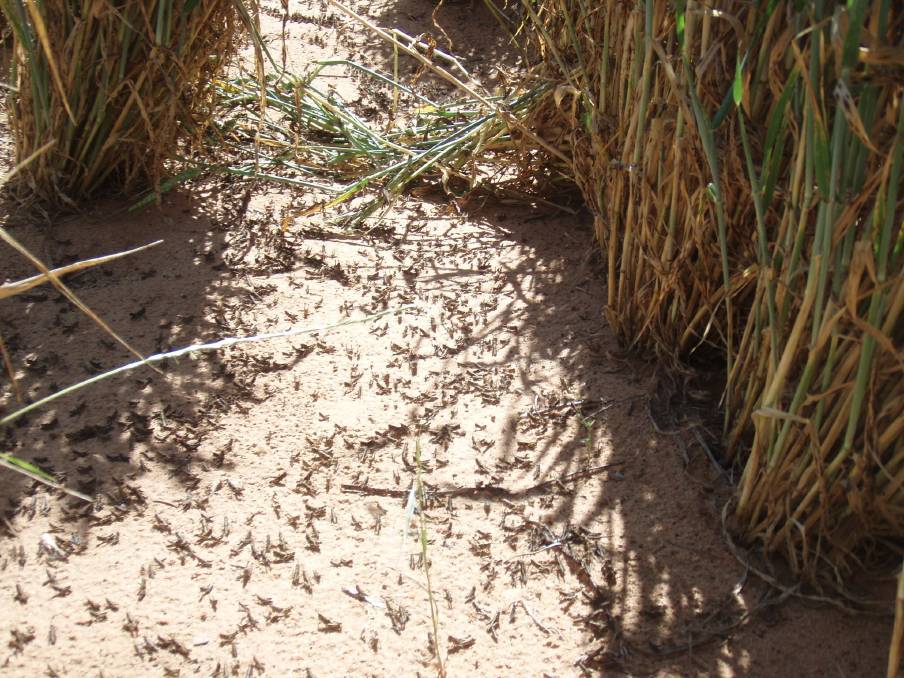 ON THE MARCH: Locusts numbers are rising in parts of eastern Australia.

Authorities are scrambling to get a handle on reports of locust damage and confirming whether it is locusts or grasshoppers at fault.

THE AUSTRALIAN Plague Locust Commission (APLC) is addressing concerns about building locust numbers by discussing management strategies for higher than average locust populations in meetings with state and local government representatives this week.

Chris Adriaansen, director of the Australian Plague Locust Commission (APLC), said numbers had built up to their highest levels in seven or eight years due to favourable climatic conditions, but were only at economically damaging levels in isolated pockets.

"Numbers are up, but this is off a run of bad years, we are well within the realms of what would be expected with these type of conditions," Mr Adriaansen said.

After higher than average numbers were recorded in far western NSW through the first half of 2020, the focus is now on northern NSW and southern Queensland and western Queensland, with locusts also reported in the western Riverina.

"There is activity in the Winton and Blackall areas, while there have been reports in cropping regions such as Moree, Goondiwindi and up to Miles on the Darling Downs," he said.

"We also have reports of locust swarms in the western Riverina around Hillston and Ivanhoe."

"Meetings this week will discuss current populations and possible future generations and what is the best way forward to manage them."

Part of the problem on the ground has been confusion identifying the species causing damage.

While locusts are the primary culprits in NSW and southern Queensland, much of the damage in western Queensland is believed to be caused by grasshoppers.

"There have been nine different species of grasshoppers and locusts that have been identified in that region," Mr Adriaansen said.

Mr Adriaansen said the first thing landholders needed to do was identify the species they were encountering.

"There are various resources on the APLC that can assist with identification," he said.

The two species are closely related, but the plague locust can take to the wing and is such much more mobile and a threat to larger areas of land.

From a logistical point of view, he said the APLC had been set up to limit plague locust damage.

"Grasshoppers are very sedentary and cannot move far, five kilometres would be a big movement, so while their damage can be very bad in the areas where they build up it is not on the broad scale that locust damage can be," he said.

Brendan Taylor, AgForce grains section president, said there were isolated reports of locust and grasshopper damage in southern Queensland but said it appeared the problem was worse in the west.

"They definitely seem to have a preference for grass rather than crops, which seems unusual, but there are anecdotal reports of locusts hatching and rather than eating the crops in that area flying back to the west," Mr Taylor said.

"There are certainly more reports of locusts in southern Queensland than usual, it often seems to be a problem you hear about more in the pastoral regions of western Queensland and NSW, but at this stage I think people are more worried about the lack of rain for summer crops than about locust numbers.

"Some people may be out in crops and seeing locusts having a munch and considering putting out some insecticide for control but in general it is not a huge problem."

Mr Adriaansen said the APLC was set up specifically for cross-state coordination of a response for locusts.

"For those with grasshopper problems they need to assess the numbers and if it warrants control they should look to do it themselves, although there are a lot more products registered for locust control than grasshopper control," he said.

"The responsibility of the APLC is to minimise economic damage when the locusts are a threat over at least two states, not crop and pasture protection for individual producers."

The story Rising locust numbers under the microscope first appeared on Farm Online.