The prospects for central Queensland's sorghum crop are entering a critical period. 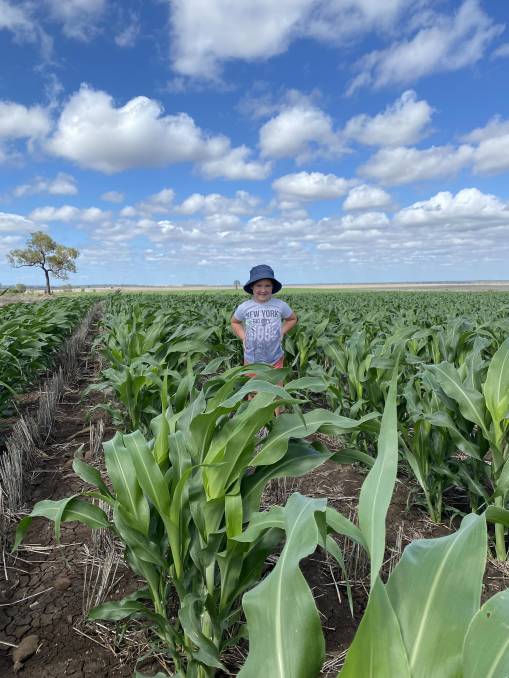 The prospects for central Queensland's sorghum crop are entering a critical period, thanks to ongoing dry conditions and limited rainfall.

While early sown sorghum crops on the back of rainfall in the Central Highlands are looking favourable, late sown crops are struggling and need rain urgently to make even average yields.

Mr Gersbach first planted 250ha, which received 50mm of in-crop rain at the start of January.

"We planted on the 15th of January, after we got some rain during the Christmas holidays," Mr Gersbach said.

"We got a brilliant strike, just off that storm rain at the start of January.

"It looks nice, it's still standing strong and it's still growing slowly, but it would explode with some rain."

The Gersbachs normally sow 60,000 seeds to the hectare but this year they went back to 52,000 purely on the lack of sub soil moisture.

"We backed off the planting rate because we had so had limited sub soil moisture," Mr Gersbach said.

They grow mostly sorghum, wheat and chick peas, as well as mung bean and sunflower crops, but the latter are on a very occasional basis.

The early promising rain led the Gersbach family to plant a further 760ha of sorghum in mid-January, but they only received follow-up of 7mm in early February.

They based much of their planning around above average rainfall predictions for the region, thanks to the La Nina influence that was much touted.

"We banked on getting rain in February and it would go for about a month, but we are looking for it right now," Mr Gersbach said.

"We didn't expect to get a full La Nina but they predicted there was an 85pc chance of exceeding above average rain and that's what we were going off, and it really let us down this season."

"We wouldn't have planted half of the paddocks that we've planted; we just thought we might have got something." The Gersbachs expect around to harvest two tonnes per hectare for the part of their sorghum crop that received good rain.

"The latest sown sorghum that only received 7mm, I wouldn't expect to harvest it without more rain," Tim Gersbach said.

He said they had expected more rain in February, based on La Nina predictions, but that hadn't eventuated.

"It's very frustrating. I've got sorghum sitting there that looks bloody good and we've done everything we can do at our end, and we just rely so heavily on a weather forecast and it has been so far from it.

"We still have good spacing within the row, just less plants per hectare, but I would have planted more area if we we had more moisture in the ground."

Mr Gersbach said the price for sorghum was optimal at the moment and they had pre-sold some of their sorghum at the end of the year at $315/tonne delivered to the port, with an optimistic La Nina prediction.