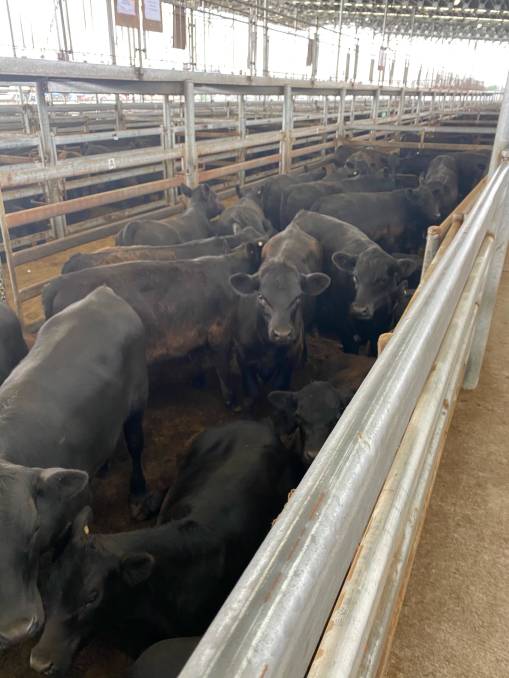 A line of quality Angus weaner steers bought by Brendan Kelly of Kellco on behalf of the Camm Ag Group from the Victorian weaner sales.

The tightening supply of cattle and record prices benefited vendors offering cattle at the Victorian weaner sales last week but some Queensland backgrounders had to walk away empty handed.

"Our sales were black Angus steers, Hereford steers, then a combined heifer sale, and we had buyers from Tasmania, Victoria, South Australia, NSW, and Queensland all operating," Mr Bright said.

GDL northern NSW agent Jeff Garland based at North Star, was operating for two Queensland clients including Andrew Wardle of GDL St George and one NSW client and finished with 470 steers for an average of $1700/head.

"We are certainly looking for more cattle but are being circumspect on price," Mr Garland said.

Mr Wardle said they secured 100 steers at the Wodonga sale for an $1700/head average.

"They are for a client who will feed for the Woolworths supermarket specification," he said. "After we secured them we had to pull out as we didn't get a look in, and didn't fill any more orders as the market was too strong for us.

"In the end we could not make the figures add up as it certainly is a tough trading environment at the moment."

"We bought the lead heavy pens from Casterton, Mortlake and Hamilton," he said

Mr Kelly paid up to 485c/kg for steers in the 385 kilogram weight range returning around $1860/head on account of Camm Ag Group, Wonga Plains, Bowenville.

"When prices are high and weights are up you expect to have to pay and my philosophy is - you either want them or you don't," Mr Kelly said.

Camm Ag CEO Bryce Camm said they always feed for the EU market and had to travel that far to fill their order.