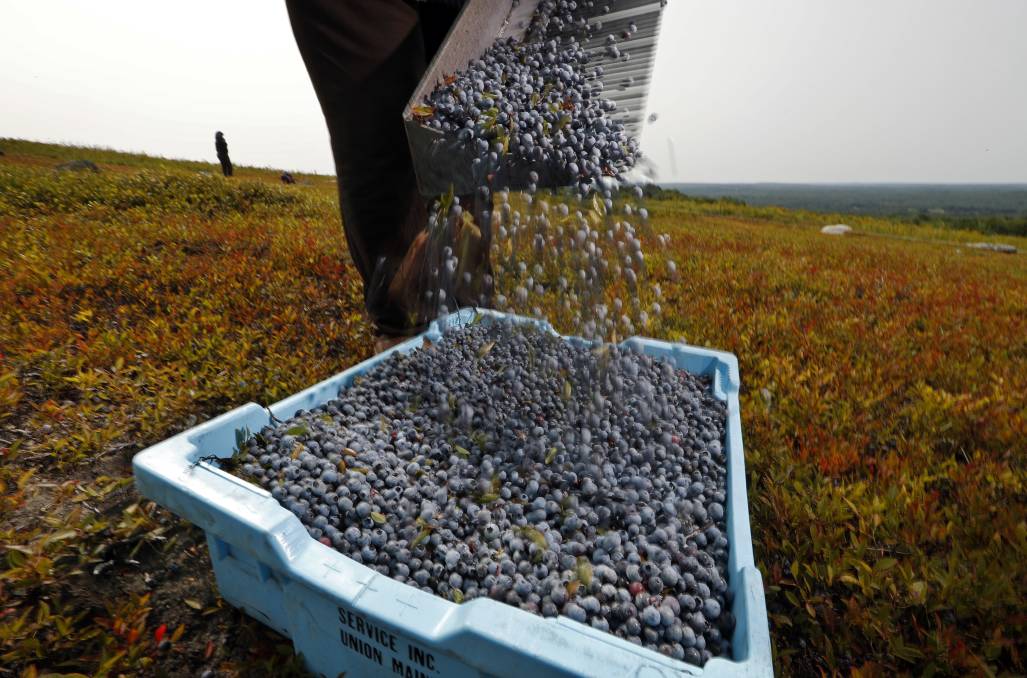 ROUGH: It's alleged blueberry pickers have been made to work seven days a week for less than minimum wage. Picture: AP

A McKell Institute report paints a grim picture of labour in the blueberry industry.

FARM workers were paid just $3 an hour to pick blueberries on the NSW North Coast, with the revelation sparking calls for a royal commission into the under-fire horticulture sector.

The McKell Institute has released the results of a three-month investigation into blueberry jobs around Coffs Harbour.

But Berries Australia has questioned some of the fact checking within the report, particularly over second-year visa requirements.

Coronavirus lockdowns led to thousands of backpackers flocking to the region earlier this year with an oversupply of labour contrasting with other parts of Australia.

The report contains first-hand accounts from workers, such as Natalie Trigwell, 46, who lost her home near the NSW town of Nimbin in the bushfires and was living in her campervan when she landed a job picking berries out of pure desperation.

Ms Trigwell said fires were so close to the orchard she could no longer see the berries.

With no phone reception, she alleges the contractors wouldn't let her leave.

"And I walked out. I didn't get paid for three weeks' worth of work for that one."

Backpackers and other migrants tell similar stories within the report of exploitation including pay well below minimum wage, seven-day working weeks and other mistreatment.

Sally, another worker, was spammed with almost 2000 messages calling her a "pig" after she asked her labour hirer for the rest of her pay.

A 28-year-old German backpacker earned just $3 an hour during one shift and averaged $6.21 an hour for 17 days of work with a local contractor.

BERRIES Australia responded to the report, saying "any fair minded Australian would agree that all workers within the horticulture industry must have confidence in knowing that they will be paid lawfully and treated fairly".

"This goes for all workers, whether they are paid directly by growers or employed through labour hire," the Berries Australia statement said.

"If the McKell Institute or the AWU have valid and verifiable concerns backed up by evidence, then they should provide this directly to the workplace cop on the beat, the Fair Work Ombudsman, rather than try and prosecute a case through the media."

"The Fair Work Ombudsman can deal with these matters in confidence if people are reluctant to come forward.

"It is disappointing that the report contained factual inaccuracies about the second-year visa extension and refers to the requirement for growers to 'sign' off on the 88 days.

"This has not been a requirement for a number of years, and it is surprising that neither the AWU or McKell Institute were aware of this."

AUSTRALIAN Workers' Union national secretary, Daniel Walton, said the idea exploitation on farms was limited to a few bad apples needed to be put to bed.

"This shocking new report can be added to the mountain of research indicating that Australian farms have become a hotbed of wage theft, exploitation and worker abuse," he said.

"It's not just Coffs Harbour either - pick a spot on the map and you will find outrageous exploitation."

Mr Littleproud said he would "never say never" but favours fixing the problem through strengthened and harmonised state laws.

"It's disgraceful. There's no other way you can sugar coat it," he told Sky News.

He said the issue was limited to a small minority. 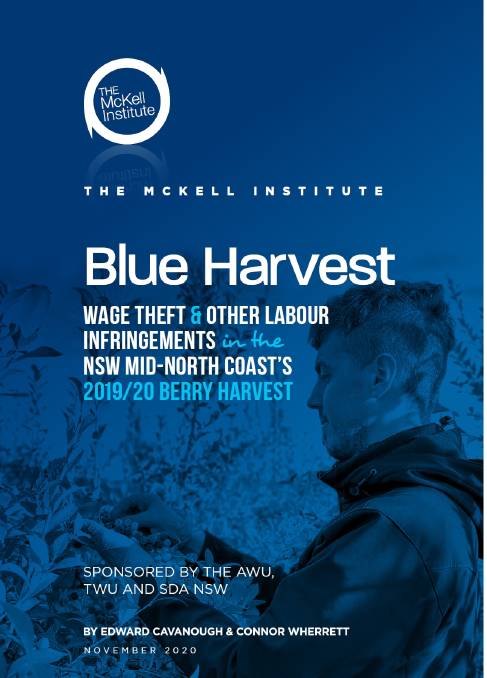 PUBLISHED: The report from the McKell Institute on labour in the blueberry industry.

The report calls for a crackdown on rogue recruiters, stronger penalties, greater enforcement from workplace investigators and reforms of Australia's visa schemes.

It also argues for new laws to ensure farmers are required to pay a minimum hourly rate.

Backpackers were paying up to $150 a person to live in nine to 12-person share houses, netting landlords three times the median rent of some Coffs Harbour suburbs.

A Gumtree spokesman said it was strongly recommended job seekers using the platform do their due diligence before considering potential job opportunities.

The Berries Australia board met with senior staff from the Fair Work Ombudsman earlier this year and expressed its unqualified support for enforcement action to be taken against those employers found to be doing the wrong thing, including labour hire firms.

"Along with many other industry bodies, we have been calling on the Federal Government to license labour hire operators to make sure the dodgy ones can't slip through the enforcement cracks and bring the whole industry into disrepute," Berries Australia said.

The story Farm workers paid $3 an hour in NSW: report first appeared on The Canberra Times.