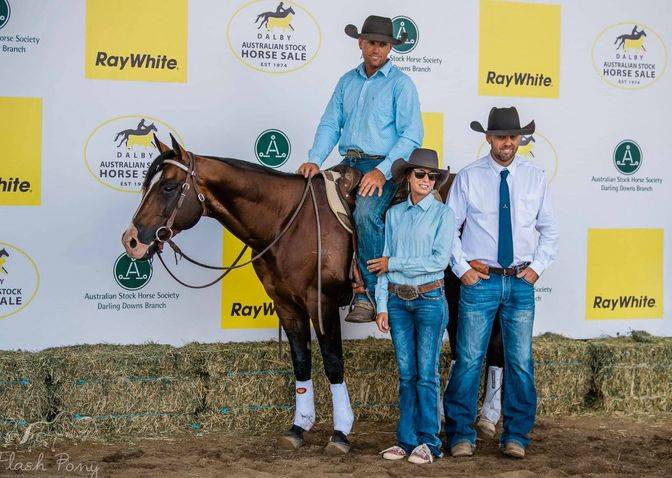 Mr Duck sold for $75,000 at the Dalby ASH sale after being passed in at $65,000 and is pictured with Nathan Wilson in the saddle, Brydie Hughes, and Matthew Crane. Picture: Flash Pony Photography

Final wrap up on the 2020 Dalby Australian Stock Horse Sale.

Eight-year-old stallion Mr Duck was the talk of the town at the Dalby Australian Stock Horse sale after he was passed in for $65,000 on Sunday.

Offered by Matthew Crane, the son of Acres Destiny and from Breks Duckolena was passed in to Brett Hall and Elsa Van den Heever who later bought him on Sunday night for $75,000.

Buyers were prepared to pay a premium at the sale, with seven-year-old bay mare Cedargrove Con D Lisa topping the sale under the hammer.

The last lot offered in the twilight portion of the catalogue on Saturday, Cedargrove Con D Lisa was knocked down for $50,000 to Rob and Sonya Southern and family, Tippendale South, Dirranbandi.

Mr Southern said he loved the style of the mare and the family would continue to campdraft her.

The success continued to flow for the Harrisons when they sold Cedargrove Diva Destiny, an eight-year-old black mare by Acres Destiny from Valli View Kirsty, who topped at $44,000 on Sunday. Diva Destiny was bought online by Kelsey Brown, Casino, NSW, and again presented by Adam Wallen.

Mrs Harrison was humbled by the outstanding result over both days. "We are really overwhelmed that other people appreciate the breeding of our horses," she said.

Mrs Harrison bought the dam of the $50,000 mare, Valli View Corina, from vendor Bruce Wilson at the Dalby ASH sale 18 years ago.

Next at the same money was Darma Acres Floozy Lover, a daughter of Hazelwood Conman from a Acres Destiny mare offered by Campbell and Kerry-Ann Tonkin of Barraba, together with Amelia and Billy Servin, Wandoan. The successful buyers were Garth and Josie Christiansen, Campo Sando, Taroom.

Mr Rea emerged as the bulk buyer of the sale securing five mares and one gelding to average $23,000.

Kristy Jeffries, Purga offered Double Shotta Duke, a son of Hazelwood Conman whhich was the top priced stallion at auction at $37,000, and was bought by Keiran Delforce and Rebecca McKeering, Torres Park, Augathella. 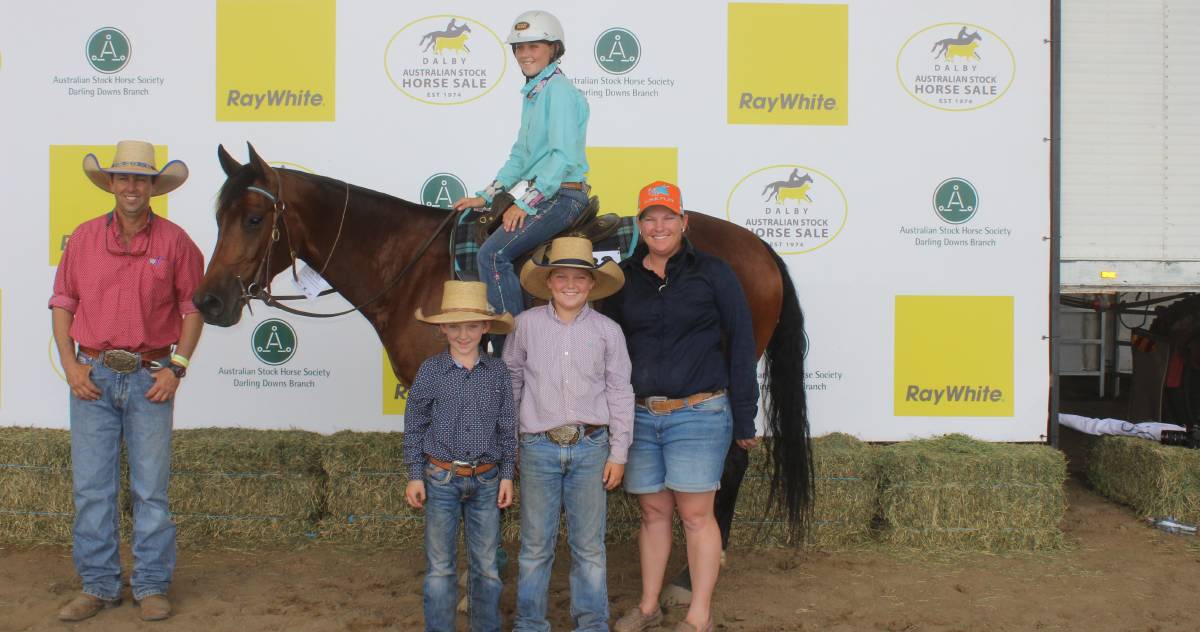 At the conclusion of the sale, 162 horses were sold for an average of $14,648, representing an 86 per cent clearance.

Selling agent Ray White Rural livestock manager Bruce Birch said they had received huge buyer interest in terms of buyers registering for bid cards. He said buyers were discerning in selections and prepared to pay a premium for well trained and presented horses.