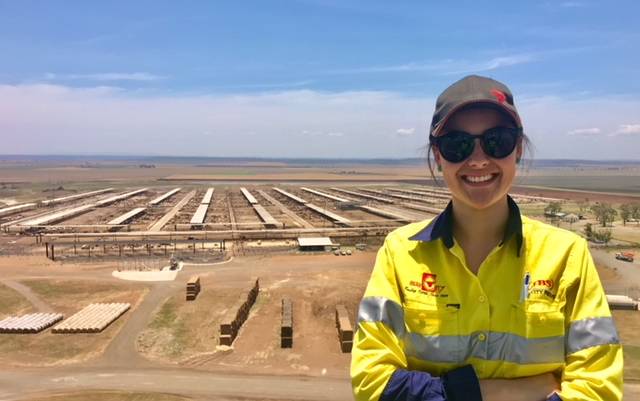 Molly Sage is one of three young achievers vying for the ALFA Young Lot Feeder of the Year Award.

Conversation surrounding the feedlot industry's carbon emissions have hit fever pitch, and it's an issue that 22-year-old Molly Sage is determined to address.

A mill foreperson at JBS Australia's Beef City Feedlot, the young gun believes fixing the industry's carbon footprint should be a top priority.

"I think it is so important that the generation I am in and future generations actually act on it and we start making changes for our future, otherwise we're not going to have a future," Ms Sage said.

"To reduce our carbon footprint as an industry is thoroughly important."

It's this focus, and the practical trials she is undertaking to address the issue, that saw Ms Sage recently named as one of three grand finalists in the Australian Lot Feeders' Association Young Lot Feeder of the Year Award.

"This year, I have focused on a very similar topic as my one from last year, as it has now become a huge part of my life trying to put it into reality," she said.

"I created a theory where we would use algae (Lemna) to create biofuels to power our boilers in our mills, as well as using the by-product from the biofuels to feed back to our livestock, because it has really good benefits for their rumen health, as well as their daily weight gain."

The concept is one that saw Ms Sage in the same position last year.

"I made the top three last year and it was fantastic, and it is a really great feeling [again this year]," she said.

From here, the final three will be asked to further explore their industry topic and present their findings to a national feedlot audience during the formal proceedings of ALFA's 50th Anniversary morning tea event on December 18. The overall winner will be announced at the conclusion of the event.