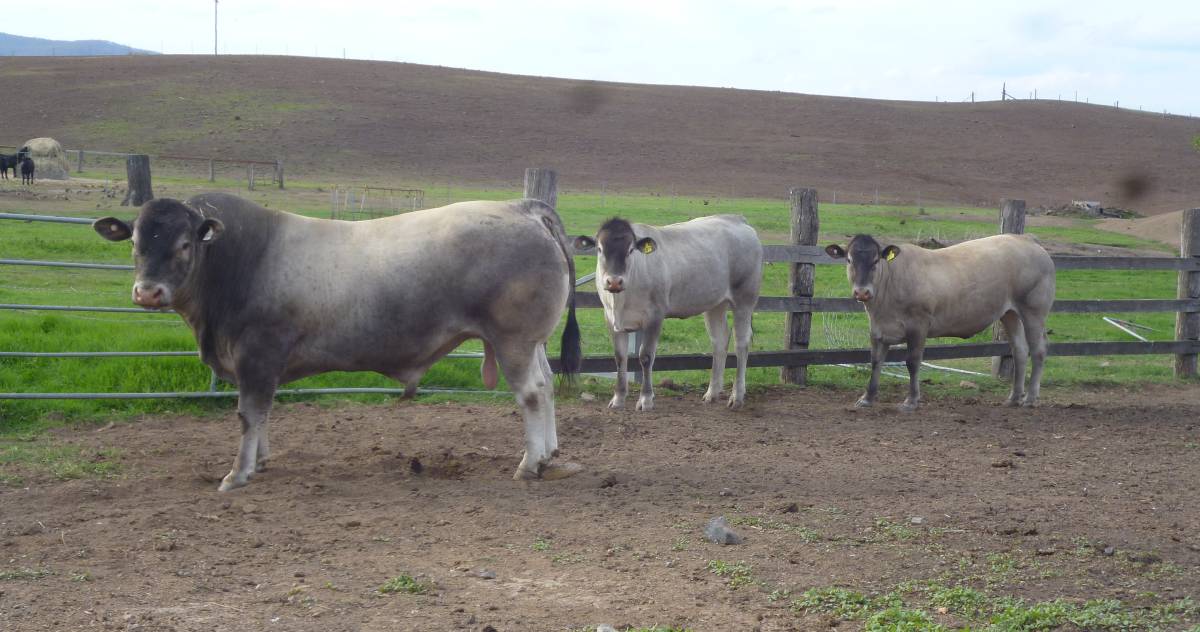 The Johannesens' Ekka 2018 junior champion bull Folkslee Navigator (P), as well as two of their poll stud heifers, have arrived in Western Australia to form the foundation of John Edwards' new stud venture.

Cattle from Queensland will form the foundation of the first Bazadaise stud in Western Australia.

Almost 15 years after showcasing the first registered poll Bazadaise in the world, trailblazers Rodney and Karen Johannesen, Folkslee Bazadaise stud, have once again ticked off a new milestone for the breed.

On Monday, two heifers and one bull from their stud arrived at John Edwards' property north of Perth, Western Australia, in what is thought to be the first instance of the breed entering the state.

Set to be the foundation of Mr Edwards' new stud venture, Mr Johannesen said it was really exciting that his bloodlines were being used to establish the first Bazadaise stud in WA.

"We've had enquiry from Western Australia a number of times in the past 10 or 12 years, but probably the cost of getting them over there has been a bit prohibitive," Mr Johannesen said.

"This sale has been in the pipeline for between two and three years, and pulling together something like this that we've been working on for so long, I'm pretty happy about it.

"John wasn't interested in anything unless they were polled and up until the past few years, there hasn't been any polled Bazadaise available."

Identifying in 1997 that the demand for polled genetics was only going to increase as time progressed, the Johannesens set out to breed the first registered poll Bazadaise in the world.

And after years of extensive trials, elimination, and selective breeding from a base of poll Santa Gertrudis, Angus, Murray Grey and Red Poll, the Johannesens achieved just that - showcasing Folkslee Abby-Sylvia at Beef Australia 2006.

This breakthrough was followed by the production of the first known poll Bazadaise bull calf, Folkslee Frontier, in 2010.

Today, their stud breeder herd of almost 100 head - located at their 790-hectare property Ironie, on the foothills of the Burnett Range - sees just three horned cows left as they continuously refine and improve their breeding program.

"Bazadaise were traditionally a horned breed - there were heaps of qualities about them that were right for the Australian market - but I could see back then that poll genetics were going to be in demand, no matter what breed it was," Mr Johannesen said.

"The other thing that I recognised with Bazadaise was that in France they don't have a requirement for very much fat, but here in Australia the market requires that you have 'X' amount of fat on your animal otherwise it's discounted, so the second thing that I set out to do was breed a Bazadaise that would lay down fat cover.

"Ekka 2018, our Bazadaise bull Folkslee Lasso had 13mm of fat on him which was an absolute record for a Bazadaise; not only was he polled, he also had that fat cover that we've been striving for and so that's the other thing that we've been working on - to breed a Bazadaise that was more suitable to the Australian environment and markets, as far as fat lay-down goes."

Mr Johannesen said while he doesn't want to lose any of the valuable traits of the Bazadaise cattle from France, they are continuously working to advance them by using bulls that will lay down more fat, maintain meat yield, and provide the hardiness that the breed is known for.