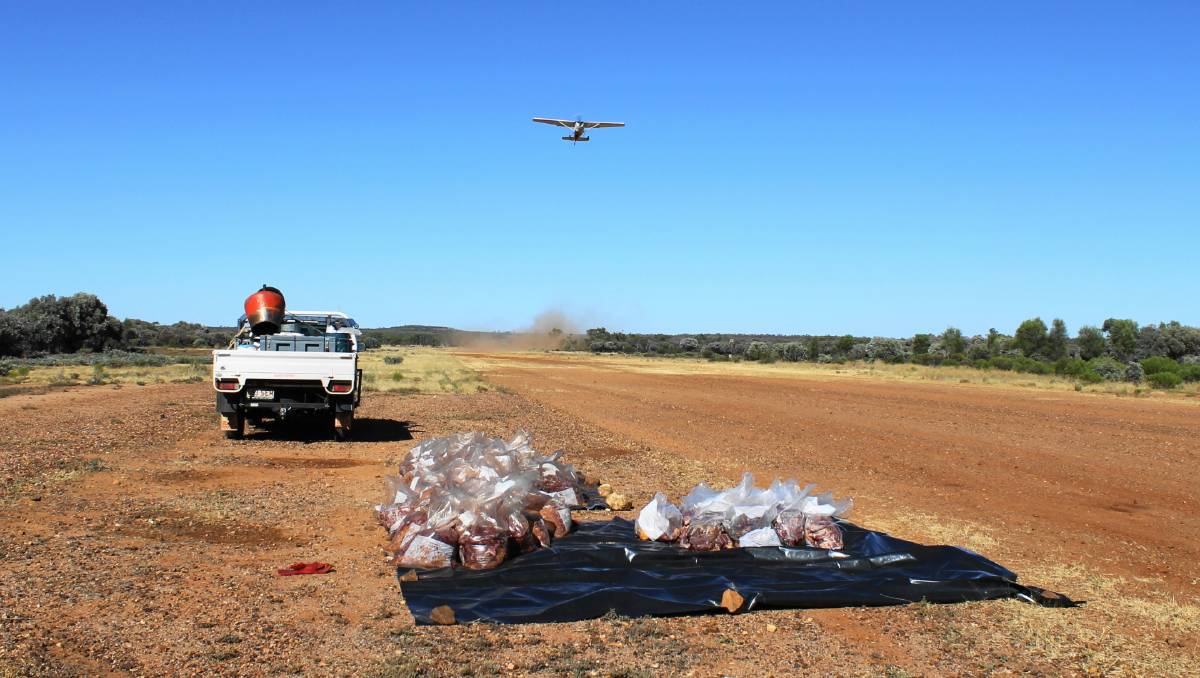 Councils around Queensland are bearing much of the cost of meat and plane hire for aerial baiting programs, but may have to cut back on that expense if they have to pay for the supply of 1080 concentrate as well.

Local government baiting programs for wild dogs are at risk because state government stocks of sodium fluoroacetate, known as 1080, are expected to run out by the middle of next year and at present there's no funding for an alternative.

Local government baiting programs for wild dogs are at risk because state government stocks of sodium fluoroacetate, known as 1080, are expected to run out by the middle of next year and at present there's no funding for an alternative.

The Department of Agriculture has provided 1080 concentrate to local councils or landholders free of charge since the 1970s to control wild dogs, feral pigs, foxes, feral cats and rabbits.

The depletion of the stockpile was discussed at a Far North Queensland Regional Organisation of Councils meeting at the start of the year, where the Department of Agriculture sought feedback on the future supply of the toxin.

It noted that once the stockpile was exhausted, 1080 concentrate would only be available from commercial providers.

A memo from the meeting said that DAF was "developing a plan for the future supply of 1080 concentrate, including a detailed examination of the impacts of the cessation of the no-cost 1080 service, and will explore all alternative options available to assist local governments and landholders to continue to undertake fresh meat baiting".

"It is anticipated that this consultation process will result in a 1080 supply strategy developed collaboratively with local government, industry and landholders," it said.

Biosecurity Queensland was unable to comment on its progress this week, saying it was a matter for the government, which will be in caretaker mode until the election results are formally declared.

Councils will be keen to see it advanced by the incoming Palaszczuk government, after a Charters Towers Regional Council motion calling for continued state government support for wild dog 1080 baiting was successful at the LGAQ annual conference on the Gold Coast recently.

Mayor Frank Beveridge hoped there would be clarity on the subject soon.

"The red meat industry is worth billions of dollars to the state economy and we have a big export port at Townsville - we can't afford wild dog damage to calves," he said.

"We run a baiting program over an area the size of Tasmania twice a year and we want to continue, but we can't do this without the state government covering the costs of the baits.

"It's also so much harder if it's not done through a coordinated approach."

Cr Beveridge said any suggestion that councils take on the cost of supplying the 1080 concentrate was "the thin edge of the wedge" and he wouldn't be giving any ground on the need for government support of the cattle industry.

"Baiting is the best way to manage wild dogs in many heavily timbered areas where there are less food sources for wild dogs," he said. "Stopping it would be a big step back in management."

According to Biosecurity Queensland, 55 of Queensland's 77 local councils were supplied with 1080 concentrate from 2016 until 2019.

While not pinpointing any costs per annum to the government, a spokesman said baiting regimes varied between council areas and were influenced by factors such as need and weather.

Senior wild dog coordinator for north and north west Queensland, Brett Carlsson said that if local government had to pay for 1080 sourced from commercial suppliers, wild dog control budgets would be impacted and something else would suffer.

"It's a big issue - it might mean not as much meat is supplied free to landholders so participation might go down," he said. "We certainly don't want to go backwards with coordinated baiting programs but the risk is there."

With the government in caretaker mode, questions about how much it would cost to supply 1080 concentrate to councils in Queensland annually were not able to be answered.

Biosecurity Queensland indicated that, because the original purpose for stockpiling 1080 had changed, the need to continue supplying the toxin was no longer there.

The stockpile was bought in the 1970s using Queensland Treasury funds as part of the state's commitment to exotic disease preparedness at the time.

The intent was that, should an exotic emergency disease outbreak occur in Queensland, then large amounts of 1080 could be used during intensive baiting campaigns to reduce the risk of disease spread by invasive animals.

A Biosecurity Queensland spokesman said the national focus of disease control was now on preventing its spread rather than large scale 1080 baiting programs.

"A nationally-agreed approach has been developed for the response to emergency animal disease incidents in Australia, which is the Australian Veterinary Emergency Plan," he said.

"Other pest animal control methods include baiting, trapping, shooting, fencing, and the use of livestock guardian animals.

"At a local level, each local government must have a biosecurity plan that covers invasive plants and animals in its area."

The spokesman confirmed the government was not planning to obtain any more 1080 concentrate for landholder use itself, and that any further supply would be through commercial channels.