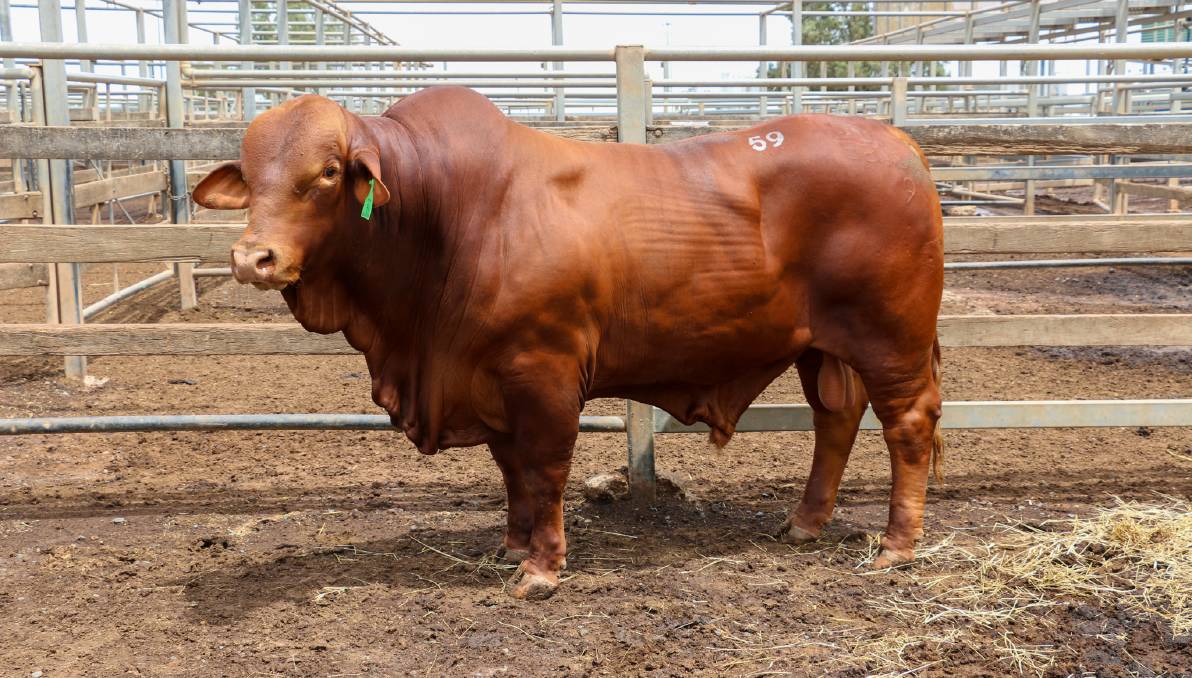 WIDESPREAD storms across the Maranoa district and throughout Queensland bolstered demand for quality bulls to lift the average by $1815 on last year at the annual Roma Droughtmaster sale last Friday.

Also helping to improve the overall result was the continued strong commercial cattle market and a genuine improvement in the quality of bulls throughout the catalogue.

Sale committee chairperson Sharon Harms, Oakmore Droughtmasters, Greenmount, said the line-up of this year's sale bulls was exceptional and a credit to the vendors.

"Our Roma sale is now in it's 24th year and finally we have a potentially good season ahead and a strong commercial market, with vendors confident they can attract a premium for the right article," she said.

"We also benefited from a widespread buying audience which came from as far away as McKinlay, Julia Creek, Cloncurry, Longreach, Charleville, Yuleba, Mitchell and south into New South Wales, with also a strong local contingent," Mrs Harms said. 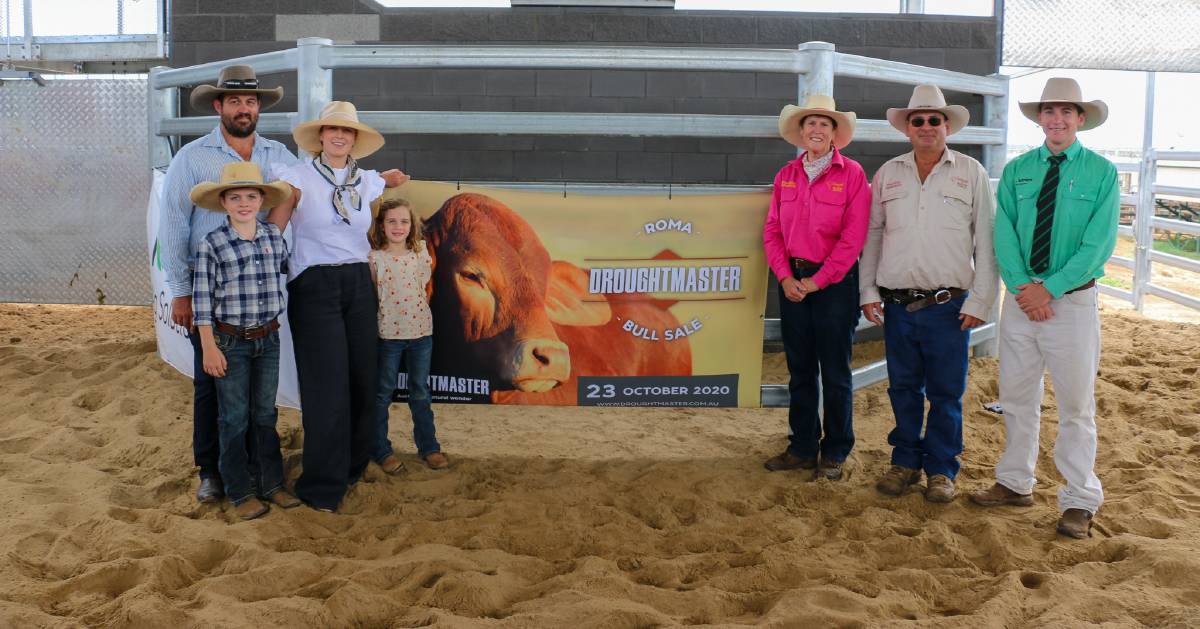 A member of the champion pair of sale bulls and selling for the $36,000 top price was Wallace Vale Jalapeno (P), a 26-month-old son of Alma Tawny (P) offered by Roger and Jenny Underwood, Eversleigh and Wallace Vale Droughtmasters, Pine Hills, Wallumbilla.

Wallace Vale Jalapeno weighed in at 994 kilograms with a scrotal circumference of 42 centimetres and was bought by first-time buyers Ryan and Chloe Hodgkinson, Cairo Cattle Company, Cairo, Clermont, who also operate the Cairo Droughtmaster stud.

Mr Hodgkinson said WV Jalapeno was a big, long bull with an excellent sheath, great weight for age and a good, sirey head and should click nicely with his stud cows.

The Underwoods sold eight bulls for a $13,000 average, with both prefixes represented.

Foundation stud, Vet School, University of Queensland, Gatton, under the guidance of Alan Morris, sold Vet School 074 late in the catalogue for the $21,000 second-highest price and averaged $9125 for their four bulls.

The impressive son of Fairhaven 07/133 was bought by Len and Sue Bode, Percol Plains, McKinlay, and will be joined to selected heifers in their commercial herd.

The Bode family accounted for another four bulls for a $8000 average.

Cameron Hudson said he based his selections on correct structure, good depth-of-body and plenty of length.

"In addition, I wanted plenty of bone and softness as these bulls will go into our Angus/Limousin-cross cows," Mr Hudson said. 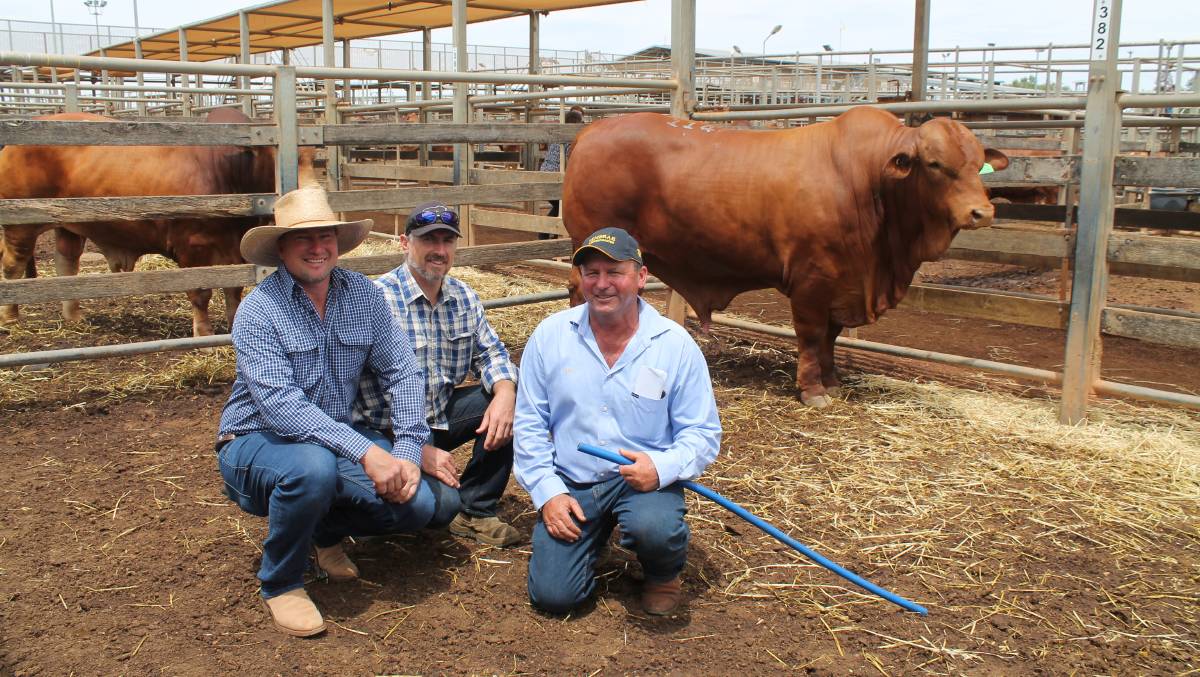 Jembrae Noah, a quality son of Clonlara 1552 (P), was bought by the partnership of Dan Jarvis and Sabina Mills, Ironhide Droughtmasters, Laidley, and Derek and Lara Mays, Tomawill stud, Templin.

The Warnes sold nine bulls under their Jembrae prefix for a $9500 average and their daughter Emma Warne of Gen Y stud sold a pair of quality youngsters for a $8500 average.