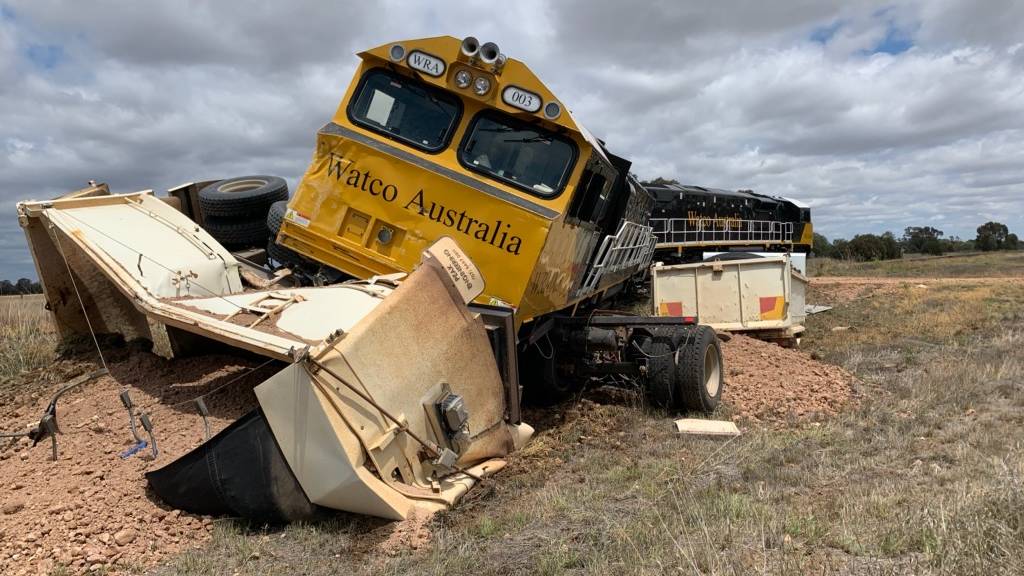 The locomotive damaged in the collision has been moved to Dulacca where it will undergo repairs. Picture supplied.

A collision between a train locomotive and a truck and trailers near Drillham has prompted a call for greater awareness of trains at level crossings in Queensland's south west.

A collision between a train locomotive and a loaded truck near Drillham has prompted a call for greater awareness of trains at level crossings in Queensland's south west.

The accident occurred at an open level crossing on Bells Road a few kilometres west of Drillham at around 11am on Thursday when a Western Downs Regional Council truck and trailer collided with a Watco engine.

According to a council spokeswoman, the council's truck driver sustained no injuries but was taken to the Miles hospital to be monitored for shock.

According to police, some damage was sustained to the crossing, and Bells Road is closed at the Warrego Highway and Bells/ Gazes Road intersection.

The council spokeswoman said a detour was in place.

"Council is taking all necessary steps to support the staff member involved and cooperate with authorities as part of ongoing investigations," she said.

A standard loaded grain train in south west Queensland weighs around 2500 tonnes, operates at speeds of around 60kph, and generally takes over half a kilometre to stop.

With rail haulage on the western line likely to increase considerably now that the freight hub at Morven is operational, along with a seasonal increase in grain trains, Mr Hood called for drivers on the roads to be much more train aware now.

"There's been hardly any trains on the western line for the last 20 years so people are not looking out for them," he said.

"We'd like to run a train a week when the cattle supply builds up, and there are already a lot more trains doing grain collection.

"This week we've run three trains to Thallon and that's only week one of operation.

"There are a myriad of level crossings without lights where people need to take care."

He said the line between Warwick and Allora was similarly expecting a lot more traffic.

According to Dave Rankine, Watco Australia's vice president for safety and environment, incidents involving rail and road vehicles at level crossings are all too common, particularly in regional areas where train operations are seasonal.

"All road users, particularly those operating large trucks or high/wide machinery, need to be extra vigilant when crossing a railway line to ensure there's sufficient time to stop at a level crossing or sufficient stacking distance between a rail line and a road intersection," he said.

"Everyone operating out on the road or rail network expects to come home safely every night.

"The collision yesterday at a level crossing involving a long vehicle and a light engine rail movement, is a timely reminder of the need to be aware and remain vigilant around railways".