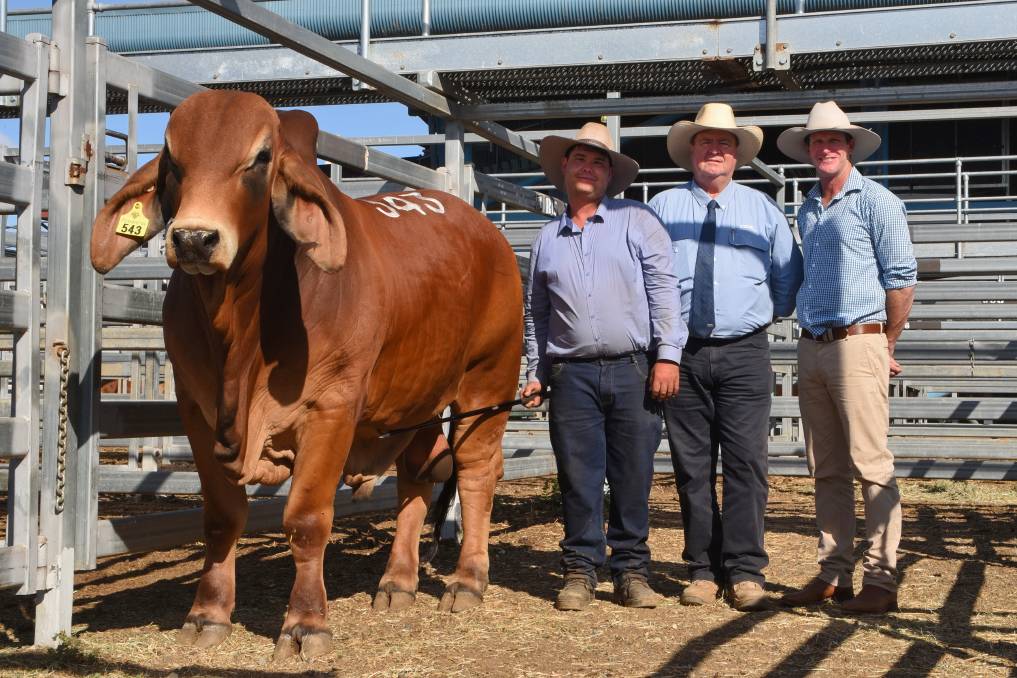 It was as if there had been no break in the selling when buyers settled in for the second day of the Rockhampton Brahman Week Sale today.

The solid momentum from the record-breaking results on day one continued as the remaining bulls in the grey section of the catalogue went through the ring.

Topping the morning's proceedings was JRL Jeronimo (IVF) (H) at $80,000, knocked down to the Kirk family of Carinya Brahmans, Gayndah.

Offered by Jason and Rachel Leitch, JRL stud, Springsure, the son of JDH Jene Manso 117/8 (IMP US) (H) tipped the scales at 932 kilograms and measured 40 centimetres in the scrotum.

At 25 months of age, the sire prospect had an eye muscle area of 145 square centimetres, P8 and rib fat of 13mm and 9mm respectively, and intramuscular fat of 4.6pc.

Ivan Price, Moongool, Yuleba, was the winning bidder for the 25-month-old Kenrol Darrocca 2761 (PP) son, which entered the ring weighing 897kg, had a scrotal circumference of 39cm, EMA of 143sq cm, and P8 and rib fat of 10mm and 8mm respectively.

Demand didn't falter when the red bulls entered the ring after lunch, with 59 of the 60 offered selling to represent a 98pc clearance, to average $13,678.

The day's top price of $90,000 was made when the second red sire entered the ring on behalf of Royce and Beryl Sommerfeld, Brahrock Brahmans, Maryborough.

The Brahrock team had a great run, with the family's eight red bulls selling to average $32,937.

This included the third-top red of the day, Brahrock Raymos 6146 (IVF) (H), which sold for $55,000 to Peter and Joy Newman, Rathlyn Brahmans, Emerald.

The second-top price was Halgenaes Malbec (AI) (PS), offered by Peter Tuxworth, Allingham, which sold for $60,000 to the Radel family.

The remaining 248 red Brahmans will go under the hammer at CQLX Gracemere from 8am tomorrow for the final day of Brahman Week 2020.