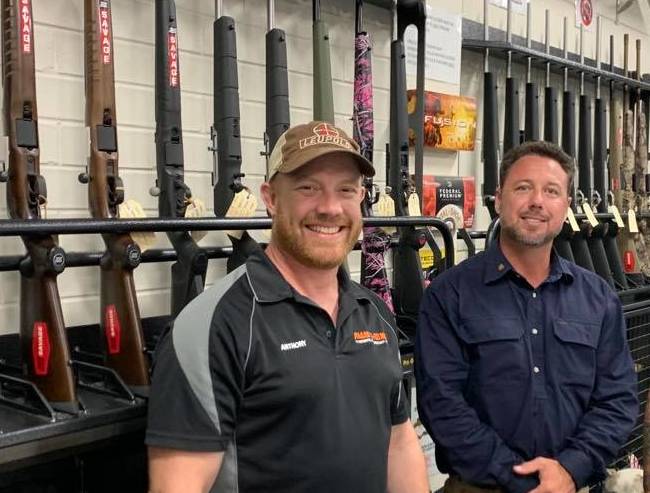 KAP's Nick Dametto, pictured with business owner Anthony Pagan, has been outspoken about bureaucratic overreach and its effect on firearms dealers.

Katter's Australian Party leader and Traeger MP Robbie Katter has accused the state government of using the COVID-19 pandemic as a smokescreen to push the ALP's political agenda.

Katter's Australian Party leader and Traeger MP Robbie Katter has accused the state government of using the COVID-19 pandemic as a smokescreen to push the ALP's political agenda.

The sudden closure of firearm dealerships at the end of March was the smoking gun for the party, which made a Right To Information application for documentation surrounding that decision.

The government didn't offer any reason for the closure at the time and after perusing 255 pages of government email correspondence from the time, Mr Katter said there was no evidence that advice from the Chief Health Officer had been used to order businesses to close.

The Premier has been telling us she's doing everything on the advice of her Chief Health Officer but we've searched and we haven't found any advice in this instance - Robbie Katter, KAP leader

"This really raises the issue of the government's integrity - what other issues have they politicised whenever it's politically convenient."

While saying KAP electorates were too distant from the NSW border for the party to form an opinion on whether borders should remain closed or not, Mr Katter said the whole issue of border closures was likely a similar political tool.

In response, a Queensland Health spokesperson said their priority was always to keep Queenslanders safe and healthy.

"All decisions during this global pandemic have been made based on the best health advice available at the time," the spokesperson said, noting that it had been necessary to close all non-essential businesses in March in order to contain and respond to the spread of COVID-19 within the community.

That was implemented on March 25 and was rapidly rolled back six days later on March 31, to allow licensed armourers and dealers or authority holders to store, manufacture, modify, repair, acquire or supply weapons or ammunition for a range of reasons.

Mr Katter said the RTI documents also proved decision-makers apparently knew nothing about what they were regulating and contained evidence that regulations were made without being properly considered or thought through.

The opening email is between policy advisors in the Premier's department on March 29 agreeing that the Chief Health Officer's direction should have contained exemptions for manufacturers, law enforcement, defence, licensed security firms, and potentially some veterinary or agricultural uses.

"This document makes it very clear these decisions were made by people with no expertise in the area and were not related to public health concerns at all," Mr Katter said.

"The people who made these decisions were so incompetent that police officers were not able to buy ammunition to do their jobs."

In one of the email exchanges, Rob Nioa, the operator of Australia's largest privately owned weapons and munitions contractor to the Department of Defence, law enforcement and prisons, detailed in an email to the Prime Minister how the state government's decision would force his business to close its doors as well.

Mr Katter said the closure of the state's gun shops had nothing to do with controlling COVID-19, but was justified by totally baseless and offensive concerns about violence in the community.

"This episode proves the state government has been making critical decisions based on its ideology and not what's best for Queenslanders," he said. "The COVID-19 crisis is real and must be addressed - but it should not be an opportunity for the government to exploit the goodwill of Queenslanders by using the virus to pursue hidden agendas."

Mr Katter also said the government was throwing its Chief Health Officer under a bus by saying all its decisions were made based on advice from her.

"She is there to give advice; the Premier is there to make decisions," he said. "That's why you elect leaders. The government needs to take responsibility for the treatment of the Chief Health Officer by people."