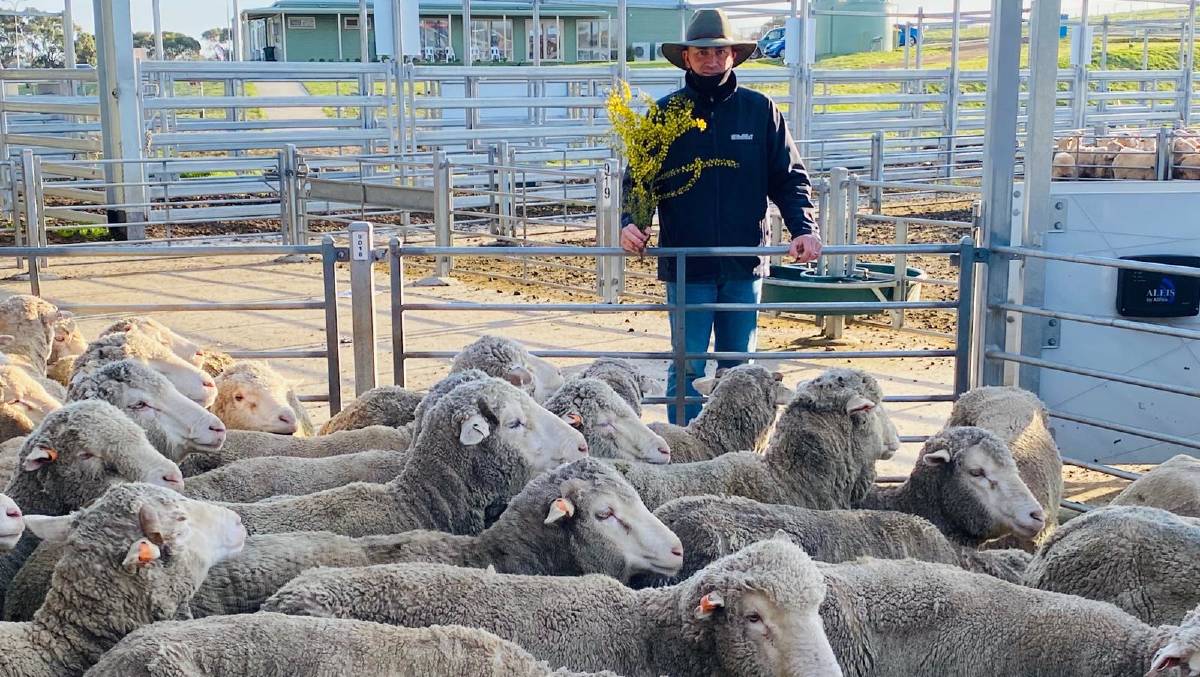 Jamie McConachy, Charles Stewart & Co, at the sheep and lamb sale at the Central Victoria Livestock Exchange at Ballarat, Vic, on Tuesday.

It's the first week of spring and the annual flush of lambs are beginning to come through saleyards.

It's the first week of spring and the annual flush of lambs are beginning to come through saleyards but the influx isn't expected for another couple of months.

Thomas Elder Markets commodity market insights manager Matt Dalgleish said in Victoria, the state that typically sees the biggest yardings at this time of year, weekly yardings are currently sitting at 20,000 to 30,000 lambs.

Mr Dalgleish said this normally grew to around 80,000 a week in early November, until the peak was reached later that month and weekly yardings of 120,000 to 140,000 were common.

And he predicted this year's numbers would be strong and similar to previous years, but said the biggest concern over the next few months would be whether Victoria would have the ability to process at full capacity.

"From generally late August to early September, we're at a low point in terms of slaughter, which means processors' reduced processing capacity [because of Victoria's COVID-19 lockdowns] isn't crucial right now," he said.

"But come October, November, we're going to be slaughtering 50-60 per cent more than what we're slaughtering now, so we really need those Victorian processors to be fully up and running in the next month, otherwise there's going to be real concerns around the ability to slaughter some animals."

He said while NSW and SA had helped take some pressure off Victorian processors these last few weeks, "there was only so much they can take".

"Those states don't have the workforce or capacity to be able to help Victoria through this if their processors aren't operational by October or November," he said.

"And that will be a disaster for producers if they have to hold on longer."

But Mr Dalgleish said the overall outlook for the sheepmeat industry was positive and that would have a lot to do with how the spring lamb buying season plays out.

"After COVID-19 and once the global economy has recovered, the long-term prospects for lamb are still robust," he said.

"Even though prices aren't as good now as they were at the start of the year, if you look at historical figures, from a five-year perspective, they're still good."

He said prices might not take as big of a hit as previous years when the spring flush comes through.

"Prices get pressured lower while the spring flush is underway and given we've already seen a good sell-off in winter and it's uncharacteristic to see a sell off in price in winter, there might be limited further moves downwards even though the flush is still coming," he said.

"And once we're through the spring flush, we could see prices creep up again."

The first flush of new-season stock came through at Ballarat, Vic, this week and sold to dearer prices, with sucker lambs reaching $175 a head.

Elders livestock agent Graeme Nicholson said the quality was mixed, which was usual for the end of winter.

"There were about 700 new-season lambs that looked quite good and the tail end of the season's lambs, including a few mixed lots," Mr Nicholson said.

Stock were drawn from vendors in the local central Victoria region, including from Wingiel Pty Ltd which offered a large run of Merino wethers, and Trotter Farming which presented a big line of suckers.

Overall, lambs sold about $10 dearer than last week, while suckers were up between $5 and $10 and were pursued by a supermarket buyer who returned to the bidding gallery this week.

The yarding consisted of 6890 head, a small yarding compared to the anticipated bigger runs the facility is preparing for in coming months.

"The bigger yardings kick off around mid-October, and November is when we really shift up a gear," Mr Nicholson said.