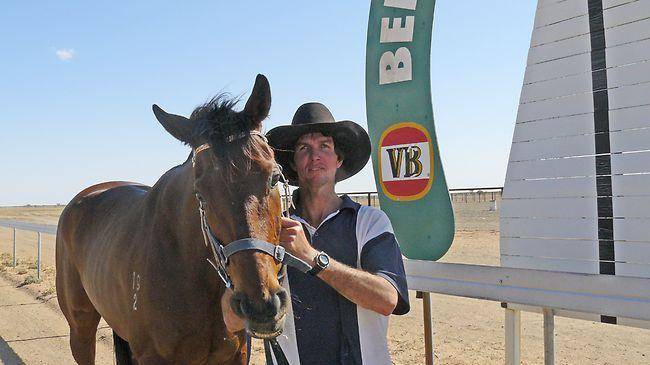 GOING RACING: Todd Austin is sending five runners from his Barcaldine stable to Longreach for the races.

Despite having a smaller stable than in the past, Todd Austin will have a strong representation at the Longreach races on August 22.

BARCALDINE trainer Todd Austin will send a good portion of his team to Longreach on August 22.

Austin has cut his numbers over the past few seasons but will have five runners making their way up the highway for respective appointments.

To be ridden by Matthew Gray, Wicked Grimshaw has been placed twice in five Longreach outings, the latest of which was on May 3 when placed third at the end of 1000m.

Gray has also been booked for the mount on stablemate Fully Maxed (Reward For Effort-Out Of Credit) in the Shell Longreach Open (1000m).

The six-year-old was a Longreach winner 11 months ago and in his only run this year finished third to Zukaz on his home track.

If Sixes (Hinchinbrook-Upper Notch) gains a start in the Benchmark 50 (1200m) Gray will be aboard.

Once with Ross Vagg in Central Queensland, Sixes is an emergency and needs a scratching to get a starting place.

Sixes has started twice for the stable, running seventh at Barcaldine on July 11 then last of 9 in a similar Longreach event on July 25.

Brooke Richardson will have the mount for Austin on Show 'Em (Showcasing-Silkwood) in the Open (1400m).

Richardson will also partner Dragon In The North (Hidden Dragon-Northern Friends) in the Ratings 0-55 Handicap (1600m).

His best of three Longreach runs was a third there on July 25.

There is also weekend racing at Charters Towers, Gympie, Toowoomba (night) and Yeppoon.