Rather than being sent to landfill, alkaline batteries are being recycled and used as manganese and zinc fertiliser. 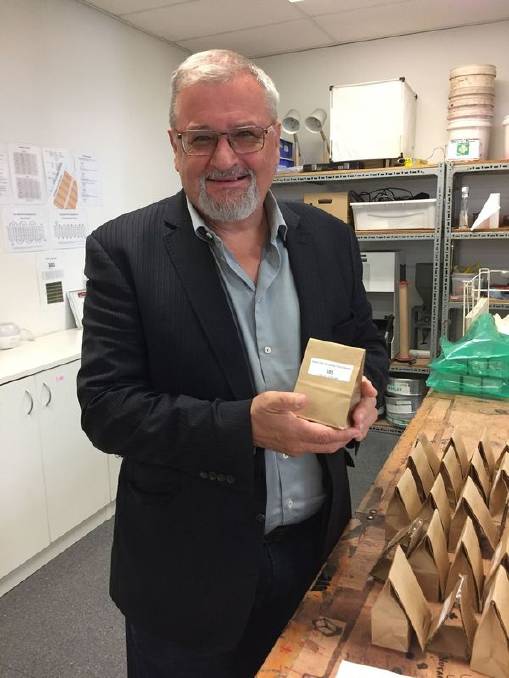 Adrian Griffin, Lithium Australia, with fertilisers made from recycled batteries.

CROPPERS may have a novel source of micronutrients should promising results from a field trial be confirmed.

Envirostream Australia is a start-up business dedicated to creating manganese (Mn) and zinc (Zn) based fertiliser from spent batteries, which it is trialling in Western Australia this season.

The batteries contain small amounts of each compound which is extracted in the recycling process.

While not as important as the major group of crop nutrients, such as nitrogen, phosphorus and potassium both manganese and zinc are critical elements of successful crop production, especially in areas with soils deficient in the two elements such as much of the WA wheatbelt.

The Envirostream trials have seen the battery-derived fertiliser applied on wheat crops in WA and discussions are now underway with mainstream fertiliser manufacturers regarding commercial use of the product.

It is not the first time that batteries have been used for micronutrients, the process is used for rapid-release fertiliser products in the northern hemisphere, however the slow release product developed by Envirostream is different and tailored specifically for broadacre production in WA's unique soil types.

A lack of zinc and manganese is a major constraint through Western Australia's wheat belt, which has sandy soils low in both nutrients.

The trials are being conducted at Kojonup in the Great Southern region around three hours south-east of Perth.

The zinc and manganese micronutrients used in the blended fertilisers were recovered by Envirostream from single-use, disposable alkaline batteries commonly found in household appliances such as toys and remote controls.

The batteries were recycled in Victoria and the mixed metal dust (MMD) from the batteries was combined with a phosphorus-based starter fertiliser (MAP).

The trial involved five treatments, no fertiliser, MAP only, commercial fertiliser with added Zn and Mn and the MMD treated MAP.

Managing director of Envirostream's parent company Lithium Australia, Adrian Griffin, said he was excited about the possibilities the project offered.

"The slow-release nature of the micronutrients produced by Envirostream could prove a real advantage in terms of local crop conditions and we're looking forward to the outcome of the trials later this year."