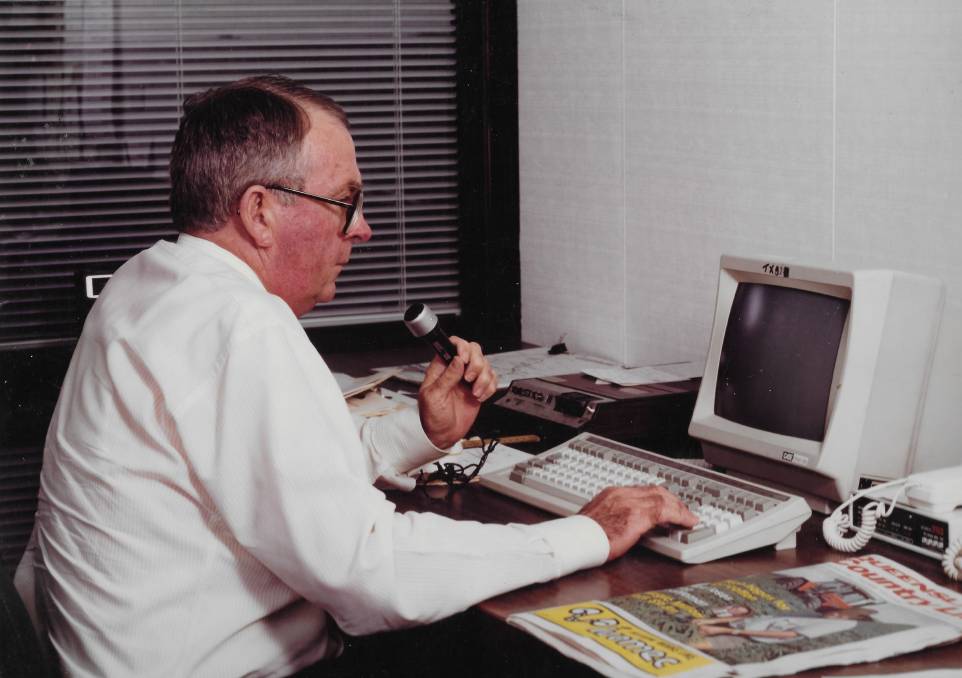 Les Clyne at his Queensland Livestock and Meat Authority desk recording a market report with a copy of QCL on hand.

Through the eighties and nineties Les Clyne was the voice of the Livestock Market Reporting Service and the critical link between Queensland Livestock and Meat Authority and Queensland Country Life newspaper ensuring the reports got through in time for publication.

Growing up in Goondiwindi in the aftermath of World War II, life was not easy but Les found a passion for music and an abiding interest in livestock from their small landholding in the district and his grandfather's trucking business.

These became the defining features that stayed with Les all his life.

An unexpected display of musical talent at a very young age was the catalyst for Les to be taught music.

He excelled at piano and mouth organ and so impressed the headmaster at school that he was soon playing over the public address system for musical appreciation.

On school holidays, Les and his cousin Robert were always up at his grandfather's and soon became quite skilled at driving the various trucks.

But a bit of mischief was never far away and on one occasion they bogged one truck, then a second in Serpentine Creek before resorting to the big International semi-trailer to retrieve the situation.

Somehow they managed to get all the vehicles back up in the yard, parked exactly where they had been and cleaned before anyone got home.

Leaving school at the end of 1957, Les took a job with J D Hindmarsh & Co, auctioneers and estate agents in Goondiwindi.

Lionel Hindmarsh was a very positive influence on Les, especially in the development of business acumen.

In 1961, Les was offered a job with Winchcombe Carson in Goondiwindi, initially doing the books and merchandise before moving on to livestock.

He was fortunate in having Boyd Hatton as a mentor and throughout his life he often reflected on this association with great appreciation for the interest Boyd took in his career.

A move to Dirranbandi followed in early 1967 as livestock salesman, pre-empting the major milestone of his marriage to Raylee in September that year.

Les will be remembered for his gentlemanly nature, repartee and artful witticisms.

For someone who could play Black and White Rag with the lights out, music was no doubt a factor in his acceptance and connection with the Dirranbandi community.

At their wedding reception in Goondiwindi there were 60 telegrams and over 50 of them came from Dirranbandi.

In 1970 Les was offered the manager's role at Winchcombe's Texas branch.

He and Raylee very quickly became part of the local community with Les taking on vice-presidency of the Agricultural Show Society and sitting regularly on the bench at Texas Magistrate's Court as a Justice of the Peace.

He accepted an invitation to join the Masonic Lodge and was recently recognised for his commitment and length of service.

Deputy headmaster of Texas State School, Barry Evans, enlisted Les for piano accompaniment at Speech Night and he and Les would often team up for impromptu entertainment on organ and piano whenever the need arose.

On a trip to a Toowoomba cattle sale in 1975, he noticed a grand piano in Newnham's Music Store.

He had always yearned for a grand piano and when it was delivered, it took eight men to lift it up into the high-set house in Broadway Street.

In 1979 when Dalgety bought out Winchcombe Carson, Texas branch became a casualty.

It was a hard decision to leave Texas but the opportunity to take over a Mini Mart store in the Brisbane suburb of New Farm beckoned.

It was a good business but three years of seven days a week was enough and Les moved on to a credit-control position with Primac.

In 1986 when I occupied a management role with the Queensland Livestock and Meat Authority, I needed a coordinator for the market information services carried out by the Authority.

I had known Les since the mid-1970s and had for a time worked in opposition as branch manager for Elders at Texas.

Les was keen to accept the role and after a settling-in period of something quite different to anything he had done before, he added his imprimatur and set about tuning the operation to concert pitch.

He very much enjoyed his time at the Authority and the feeling was reciprocated by all those who worked there at that time.

This was also the beginning of a long and very special relationship with the ABC.

Already known to the many ABC Rural staff for his Cannon Hill market reports, Les was an obvious choice to take over the regular Friday weekly roundup that Bill Webb had previously provided.

Queensland Country Hour executive producer Robin McConchie invited Les to take on the role, something he continued to do long after his retirement in 2000.

Fittingly, Robin hosted a special luncheon for Les in honour of his 30 years long service with the ABC and presented him with a magnificent crystal plaque which he treasured.

Les will be remembered for his gentlemanly nature, repartee and artful witticisms.

Cutting short a Sunday morning flying lesson at Goondiwindi to fill in for the organist at church, Les was castigated by an old parishioner who considered flying on the Lord's Day was really not appropriate.

Quick as a flash Les said, "One thing about it George, I was a few thousand feet closer to Him than you were."

His conversational wit was legendary.

Someone of sanctimonious disposition he might describe as being as pious as a wether cat while a display of restless anxiety might earn the tag of being as nervous as a long-tailed cat in a room full of rocking chairs.

He was as dexterous with his hands on a split-shift 10 speed gearbox as he was on a concert grand piano.

He loved the agency game and gave back as much joy as it gave him but above all he was devoted to his wife Raylee.

Les will be farewelled at a graveside service at Redcliffe cemetery this Friday, June 26.

The story Vale Les Clyne: A man of many talents first appeared on Farm Online.