Since the outbreak of COVID-19, Four Daughters Premium Black Angus has adapted their business model to now provide premium products to the domestic market with their new family box. Molly Penfold with a pen of Angus cattle which will be fed for 150 days and then processed under the label Four Daughters Premium Black Angus.

Dan and Karen Penfold have long supplied quality 100-day feed cattle to a large domestic supermarket, but a chance meeting with a Chinese meat importer gave them the opportunity to diversify into the international market.

"It was at Beef 2018 that Dan started a conversation with an Asian couple who were from Wuhan in China and were meat wholesalers," Mrs Penfold said.

"They were looking for a producer to grow beef for their business in Wuhan, so we issued them an invitation to visit.

"Prior to getting any beef to China, we spent 12 months educating them on growing beef. They wanted black Angus and as Dan buys out of Roma every week, he took them to the Roma Saleyards."

Mrs Penfold said the couple were fascinated by the girls' major role in the business, and that's how they came up with the name for their branded beef - Four Daughters Premium Black Angus.

The four Penfold girls - Bonnie, 22, Molly, 20, Jemima, 18, and Matilda, 16 - are passionate about agriculture and plan to make it their future.

The family has two properties in the Meandarra district, Old Bombine which has a 1500SCU accredited feedlot, while Mamaree, has a 1000-head feeding capacity. Their other property, Bellvue at Yaraka, is used for both breeding and backgrounding.

At any one time, the family has 3000 backgrounder cattle to supply their domestic and export markets. The family feed cattle for their Premium Black Angus label for 150 days and then consign 150 head to the Northern Co-operative Meat Company abattoir in Casino, NSW.

"First they are processed, and the next day they get boned and boxed into the cuts our customer wants," Mrs Penfold said.

"We age them for seven days before they're frozen and then they're sent via ship from the Port of Brisbane to the Port of Shanghai.

"One of the challenges was avoiding waste and getting the most out of the animal. The Chinese market doesn't want rump, so we have been selling the 150-day feed rumps on the domestic market direct to the public." 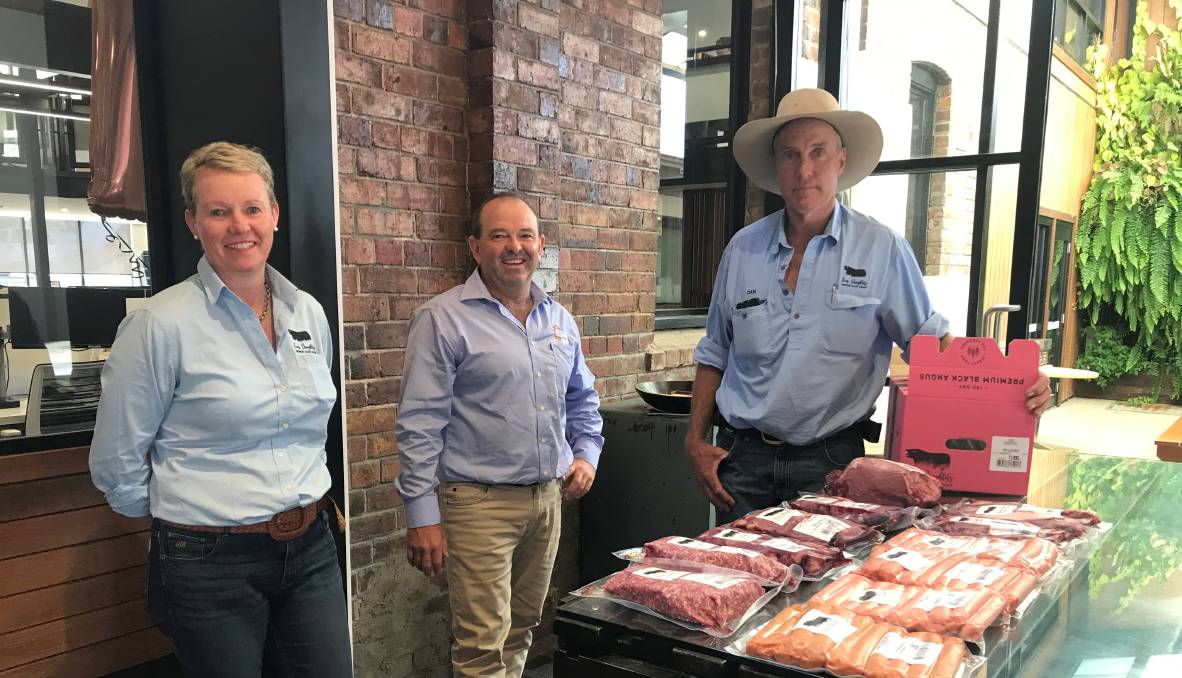 Karen and Dan Penfold, and Justin Heaven, TSBE, with the Four Daughters Premium Black Angus beef box, packed and delivered directly to the customer by the couple.

Since the outbreak of COVID-19, Four Daughters Premium Black Angus has adapted their business model to now provide premium products to the domestic market with their new family box.

"We made available our 150-day Grain-fed Premium Black Angus Beef Box, packed with seven cuts of black Angus beef, which otherwise tends to not be available to the public outside of high-end restaurants," Karen Penfold said.

"Instead of sending all our beef off to export, we want to keep some to share so families get to experience a little bit of what our family does each day - a family who loves the land, their animals and has the knowledge to produce quality food in a sustainable way."

And Mrs Penfold said the response has been overwhelming. TSBE Food Leaders Australia general manager Bruce McConnel said businesses, just like Four Daughters, are to be commended for adapting during this difficult time.

Since Queensland Country Life interviewed for this story and went to press Mrs Penfold said they had been notified that the Northern Co-operative Meat Company processing plant which processes their product had been affected by China's suspension on Australian beef exports.

"We are looking at what we can do to maintain our market position in the export arena and are pursuing the building of our domestic footprint through the sale of our pink Four Daughters Black Angus Beef boxes," Mrs Penfold said.